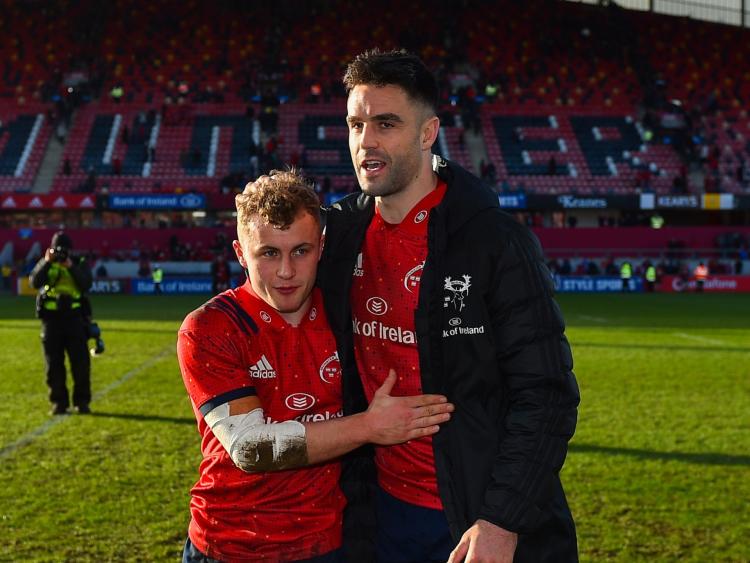 MUNSTER senior coach Stephen Larkham revealed that Conor Murray's versatility as a half-back is rubbing off on their exciting young scrum-half Craig Casey.

Murray was deployed at out-half for Ireland for a period during last Friday night's Autumn Nations Cup fixture with Wales following injuries to Jonathon Sexton and Billy Burns.

Limerick man Murray moved out to 10 from his starting position of scrum-half during the second half.

Speaking at Munster's weekly press briefing this Thursday, Stephen Larkham said: "I saw yesterday we sort of had an install where we were just going through our lineouts for the week and I saw Craig Casey jump into 10 for the opposition team. So he’s obviously taking a leaf out of Conor’s book.

"Obviously Conor is disappointed that he’s not starting Saturday's game with England. He is a very skilful player and we also had him here on the bench as a cover for 10, so it’s good to see that."

Former Wallaby playmaker Larkham has been impressed with the development of Munster's out-halves, JJ Hanrahan and Ben Healy as well as their younger 10s Jack Crowley and Jake Flannery.

I’m very happy with the way they’re controlling the game. They both have got a really good skill set. The young guys Jack (Crowley) and Jake (Flannery) haven’t really had an opportunity yet," Larkham said.

"We are definitely moving towards a system where they can take full control of the team once you’re on the field and I think Ben and JJ are doing a really good job of that. It’s only a matter of time before we get some game-time into these other young guys.

"I think Ben’s transformation of the last six months, and he is still young and his body is still growing, his understanding of the way we want to play has gone through the roof.

"Very happy with what he’s putting out there and JJ, he probably had his best run ever in Munster colours in terms of the number of games started in a row, adding continuity to his game. He too has a real good understanding of the way we want to play at the moment so to at the moment those two are really cementing in that position and doing a really good job."

Guinness PRO14 Conference B table toppers Munster travel to Scotstoun on Monday for a crucial meeting with Glasgow Warriors, 8.15pm.