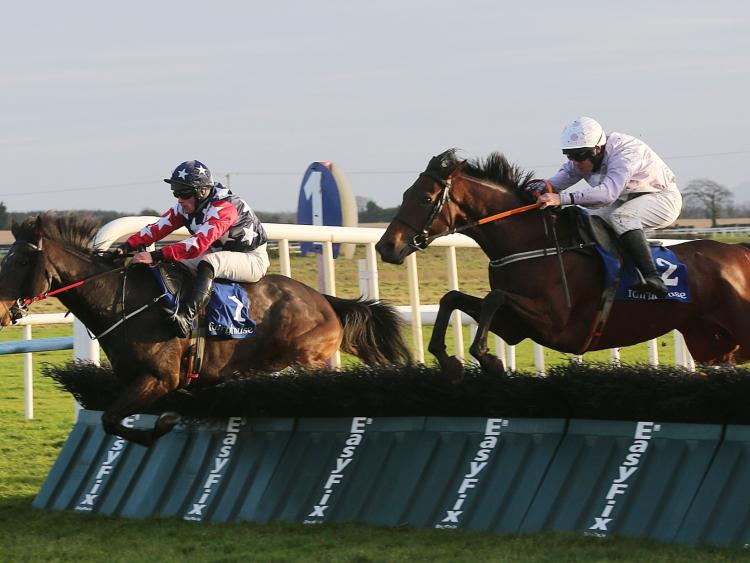 FIRST and second in the Foxhunters’ Chase at the Cheltenham Festival, It Came To Pass and Billaway only played minor roles as the Enda Bolger-trained Stand Up And Fight won the Irish National Hunt Steeplechase Committee Celebrating 150 Years Hunters Chase at Fairyhouse on Tuesday.

Aine O’Connor was in the saddle as the 16/1 chance took advantage of a penultimate fence mistake from 5/2 favourite Billaway to beat that rival by a cosy length and a half while Cheltenham winner It Came To Pass could only manage fourth place.

Chris Hayes gave veteran Curragh trainer another all-weather winner at Dundalk on Wednesday where Astadash easily landed the 10f maiden. A 4/1 chance, she got on top early inside the final furlong and skipped clear to score by three and a quarter lengths from the Joseph O'Brien-trained Zofar Zogood.

The winner is owned by Liz Barry of Manister House Stud in Croom and her daughter-in-law Rebecca and Hayes said, “It means a lot to ride a winner in these colours as everyone knows Frank Barry was Kevin’s right-hand man at the sales and they bought many good horses together.”

Shannon trainer Michael McDonagh won the 2m4f handicap chase at Clonmel on Thursday with Spancil Hill which relished the testing underfoot conditions. With Barry Browne in the saddle, the 8/1 shot beat the Brian McMahon-trained Hoke Colburn by a cosy length and a half.

Ballingarry handler Charles Byrnes was among the winners at Fairyhouse on Friday where the Top Of The Hill Syndicate-owned Run For Oscar scored a two-length success under Phillip Enright in the second division of the 2m maiden hurdle.

The 100/30 chance, a first winner at the venue for trainer William Haggas, made much of the runner and was far too good, pulling clear to win by six lengths from the Michael Halford-trained Surrounding, winner of the race for the previous two years.