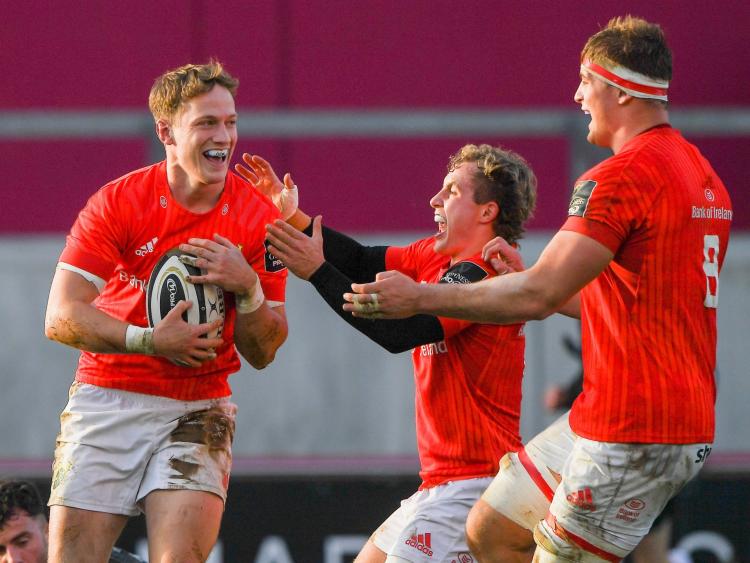 IN-FORM Munster have opened their Guinness PRO14 season with five successive wins for the first time in 11 seasons following their thumping 38-22 bonus point victory over the Ospreys at Thomond Park on Sunday.

Munster have now won their last 11 fixtures in all competitions against the Ospreys since the Welsh region last won in Cork in February 2016.

Prolific number eight Gavin Coombes grabbed a hat-trick of tries, including two in the second half, to bring his tally to five in three games as Munster cemented top spot in Conference B of the Guinness PRO14.

Man of the Match Coombes is only the third number eight to score a hat-trick of tries in the history of the Guinness PRO14.

There was much to admire about Munster's play in the favourable conditions. The home side were powered by their excellent back-row where try-scoring hero Coombes was ably assisted by the excellent Tommy O'Donnell and captain Jack O'Doonoghue.

Munster have now won their last seven home fixtures in all competitions. This wasn't a perfect display from Munster, but it didn't need to be. The home side made a few too many unforced errors and their defence coughed up three tries over the 80 minutes.

The Ospreys took a stunning sixth minute lead when following a terrific break up the middle of the pitch from their full-back Mat Protheroe, winger Luke Morgan touched down.

Out-half Stephen Myler duly added the conversion for a 7-0 advantage.

To their credit, Munster kept their composure despite suffering that early body blow. The home side cranked up the pressure on the visitors by building pressure and phases.

With Casey ever-willing to snipe, keeping the Ospreys back-row honest, Munster's attack was potent. From a period of concerted pressure inside the Welsh side's '22, powerful number eight Gavin Coombes barged over from close range. Coombes was making it three tries in two recent home games, following his brace of touchdowns against Cardiff Blues.

Hanrahan's conversion tied the score at 7-7.

Mike Haley sidesteps through the Ospreys' defence to give Munster the lead at Thomond Park.

Munster then hit the front in the 19th minute when full-back Mike Haley struck for an opportunist try, seizing on a loose ball, before gliding his way over thanks to some fancy footwork.

Scannell added the extras as Hanrahan was nursing a bang on his leg for 14-7.

Munster lost out-half JJ Hanrahan to a leg injury at the end of the first quarter and his replacement Ben Healy kicked a penalty goal soon after coming onto the pitch to stretch Munster's lead to 10 points, 17-7.

The Ospreys made it a one-score game, 17-10, in the 34th minute when Myler added a penalty goal.

However, Munster regained the initiative a minute before half-time when the home side struck for their third try. The score came courtesy of a brilliantly-executed driving maul, with hooker Kevin O'Byrne awarded the touchdown.

Healy's conversion made it 24-10 to the home side at the break as Johann van Graan's charges took advantage of the sin-binning of try-scoring winger Luke Morgan.

Munster made their numerical advantage tell even more just four minutes after the restart when livewire scrum-half Casey made terrific yardage with his dancing feet, while Coombes was on hand to barge over from close range. It was the West Cork man's fourth try in his last three appearances in red.

Healy's conversion made it 31-10 and the game was effectively over.

The try-fest continued in the 54th minute when Coombes struck for his third try of the game, cleverly taking a quick tap-and-go off a penalty award deep inside the Ospreys' '22 before powering over from close range.

Healy's third successful conversion made it 38-10. With the five points in safe-keeping, Munster went off the boil inside the final quarter.

The Ospreys hit back with a fine maul try of their own from replacement Dewi Lake on 65 minutes to reduce Munster's lead to 23 points, 38-21 with 14 minutes remaining.

After Munster had lost captain O'Donoghue to a 75th minute yellow card, Ospreys were awarded a penalty try a short time later as their scrum shunted the Munster pack backwards at a rate of knots close to their own line.

A minute's silence was observed before kick-off as a mark of respect to the late John O'Neill, from Waterford, the former Munster player and a member of Munster Rugby's Development department where he worked as a full-time coach in 2007.