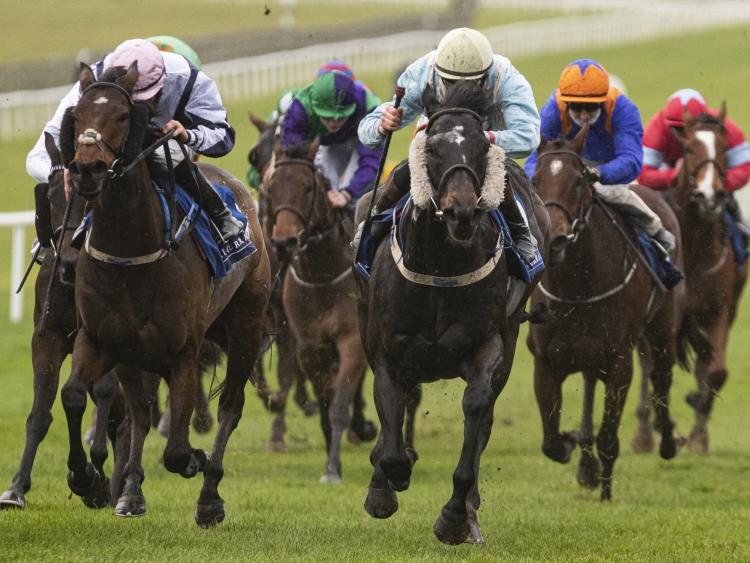 Abbeyfeale jockey Paddy Harnett teamed up with Youceeyouceecee (cheekpieces) to win the first division of the 7f handicap at the Curragh on Monday last Picture: Patrick McCann/Racing Post

ABBEYFEALE, Co Limerick apprentice jockey Paddy Harnett won the opening division of the 7f handicap on the Susan Finn-trained Youceeyouceecee at the Curragh on Monday last.

Sent off the 5/1 favourite, the game eight-year-old got to the front early inside the final furlong under the highly-regarded young Limerick pilot and beat the Tom Cooper-trained Miss Adventurous, ridden by Chris Hayes, by half a length to give Harnett his sixth success of the season.

The Denis Enright-owned Mattie’s Mountain landed the second division of the 2m handicap hurdle at Fairyhouse on Tuesday for Athea trainer Eoin McCarthy. Ridden by Gearoid Brouder, the strong 7/2 favourite wore down 11/1 chance Listenheretomejack late on to win by three-parts of a length.

Hayes holds the winner in high regard and sees her as a stakes’ race competitor next season and completed a double later in the afternoon when the Aidan Howard-trained Thefaithfulindian comfortably won the 8f handicap for owner Tanya Foxe.

Ballingarry jockey Billy Lee also made it to the winners’ enclosure as the Willie McCreery-trained Claonadh took the 5f maiden. A well-supported 10/1 chance on her debut, she scored by a length and a half from the Edward Harty-trained Coins Cross.

Hayes later added another as the 2020 Flat season drew to a close at Naas on Saturday where he partnered Ger O’Leary’s smart performer Real Force to an easy success in the 7f conditions’ race.

The 15/8 favourite made much of the running and romped to a four-length win over Silver Service.

Rathkeale jockey Conor McNamara possibly had a little luck on his side when winning the 2m handicap hurdle with 16/1 chance Youngnedofthehill at Navan on Sunday.

The 12-year-old came from well off the pace and was left in the lead at the final hurdle when Pike County tipped up. The Shane Nolan-trained gelding went on to win by an easy four and a quarter lengths in the colours of the Santana Syndicate.

On the back of Joseph O'Brien’s remarkable Melbourne Cup victory with Twilight Payment, the was further Irish success at the Breeders’ Cup at Keeneland over the weekend.

Ridden by newly-crowed champion jockey Colin Keane, Tarnawa landed her third Grade/Group 1 win of the year when coming from well off the pace to account for the wonderful Magical at odds of 3/1. It was also a first Breeders Cup success for Keane while Vincent O’Brien, John Oxx, Aidan O’Brien and his son Joseph are Ireland’s Breeders’ Cup winning trainers.

Indeed Aidan O'Brien enjoyed further success at the meeting when Order Of Australia scored a surprise success in the Mile, the three-year-old beating his own stable companions Circus Maximus and Lope Y Fernandez to the line.

European trained horses won all four turf races on Saturday night and Glass Slippers gave Golden, County Tipperary-raised trainer Kevin Ryan his own breakthrough Breeders’ Cup win in the Turf Sprint. Ryan has been a leading trainer in the north of England for many years.

For the second year running the Willie Mullins-trained True Self landed the Group 3 Queen Elizabeth Stakes at Flemington on Saturday. The eight-year-old won by a length under Hugh Bowman, beating Joseph O'Brien's Pondus into second place.