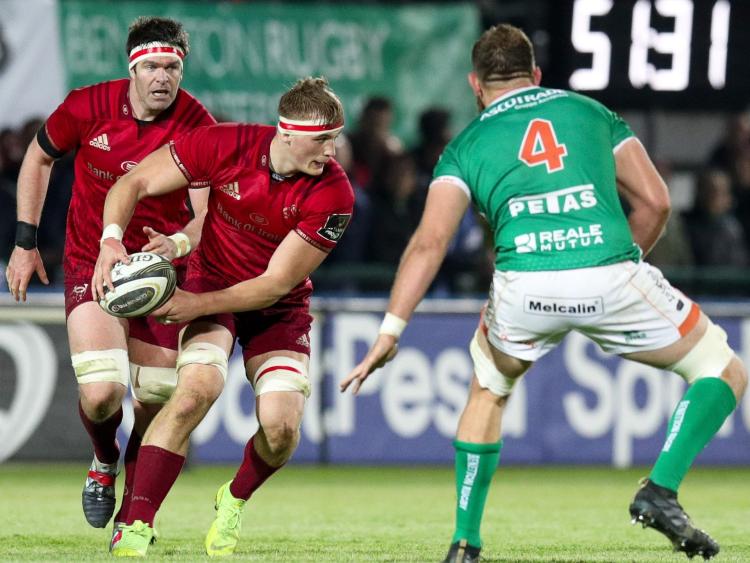 EXCITING Munster forward Gavin Coombes says playing in the Energia All-Ireland League with Young Munster help him develop into the exciting back-rower he is today.

Coombes said the league is a 'great pathway' for young players to develop.

Twenty two-year-old Coombes said, who was Man of the Match for Munster in their recent Guinness PRO14 victory over Cardiff recently said: “(All-Ireland League) It’s a very physical league so you learn a lot of stuff there. The quality is very high, so it’s a great pathway for lads coming from the academy to work on their skills and work on their basics.”

Coombes was in line to start for Munster in their scheduled PRO14 clash with Benetton in Italy on Saturday. However, the fixture was postponed due to a number of positive Covid-19 cases in the Italian side's squad.

However, Munster are due to return to action on Sunday next when Ospreys visit Thomond Park.

Coombes said: “Learning off CJ (Stander), learning off Pete (O'Mahony) in the lineout, and even moving into the second row and taking my chance there, just being on the pitch, that helps you to be ready.

“They’re very good, they’re pulling all the young lads through. There are a number of us coming through and the moment and they will come to you if they spot something in your game they think they can help you with. They’re very approachable lads.”

The growth in the popularity of rugby in West Cork has been highly impressive over the past number of years. Munster winger Darren Sweetnam's emergence as a top player has been followed by a string of other s in recent years.

“West Cork always had the strongest clubs we played against, the likes of Clonakilty and Bandon, so to me, it’s no surprise that we’re producing players at the rate we’re producing them and long may it continue,” Coombes said.
“Rugby has just grown those teams through the 2000s and there’s just been more of an interest. West Cork teams were winning and success will drive more lads to be interested.”

Coombes was a key figure in the emergence of Bandon Grammar School as a major force in the Clayton Hotels Munster Schools Senior Cup for close on a decade.

“It was very enjoyable,” Coombes enthused.

“It was more of an unstructured game so I learned a lot about that side of the game. With the likes of Darren coming through before me, I saw there was an opportunity there to break through into Munster and I hope there’s a few lads behind me that can see there is a pathway there too.”

Following the postponement of their scheduled fixture with Benetton on Saturday, Munster will return to action in the Guinness PRO14 with a hoem tie against Ospreys at Thomond Park on Sunday next at Thomond Park, 2.45pm.

Johann van Graan's Munster side have won each of their opening four fixtures to sit on top of Conference B.