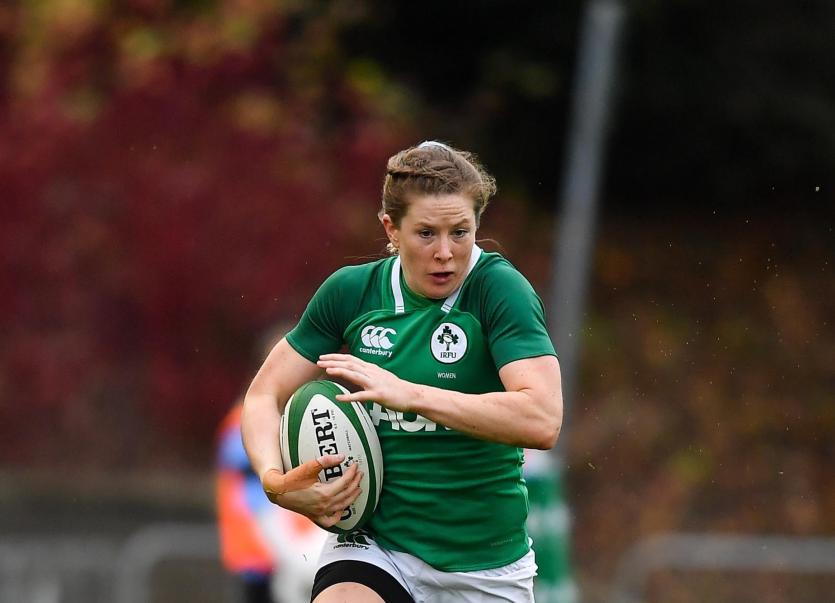 Enya Breen, of UL-Bohemian and Munster, is named on the wing for the Ireland Women's side in Saturday's Six Nations clash with Italy

Dorothy Wall will make her first start for the Ireland Women’s 15s side, having come off the bench in the all three of the competition’s earlier rounds. Joining her in the back row will be Claire Molloy, who will earn her 70th cap for her country and captain Ciara Griffin.

Lindsay Peat, Cliodhna Moloney and Linda Djougang all start in the front row for the fourth game in succession with Nichola Fryday and Ciara Cooney behind them in the second row.

Hannah Tyrell and Kathryn Dane form the half-back partnership with out-half Tyrell making her first start of the campaign.

Enya Breen and Sene Naoupu are the centres while Béibhinn Parsons, Lauren Delaney and Eimear Considine all link up in the back three.

Griggs says the entire squad are aware that they are part of a select group of people permitted to play competitive rugby at the moment.

"We've spoken about it," says the Head Coach in the below video.

"No one across Irish Rugby in the women's game is actually able to pull on a jersey and play right now and yet here we are already privileged to represent our country and be one of the only teams actually playing in these times.

"It's not lost on us and we want to make sure that we perform really well and give everyone watching something to cheer about come the final whistle."

There’s potential for Ireland debuts off the bench on Saturday with uncapped forwards Neve Jones, Katie O’Dwyer and Brittany Hogan all earning their place in the match day squad.

Laura Feely and Hannah O’Connor will provide the remaining cover for the pack while Ailsa Hughes, Larissa Muldoon and Katie Fitzhenry will give Coach Griggs further options in the backline. Fitzhenry along with Hannah Tyrell and Brittany Hogan have also featured for Ireland 7s in the HSBC World Rugby Sevens Series 2020.

Speaking about team selection, Griggs says," I think the beauty of what we've got now is such a competitive wider squad and some of those selections weren't as straight forward as you think. Some of those players who've missed out can take credit for how hard they've pushed these girls.

* Denotes uncapped player at this level