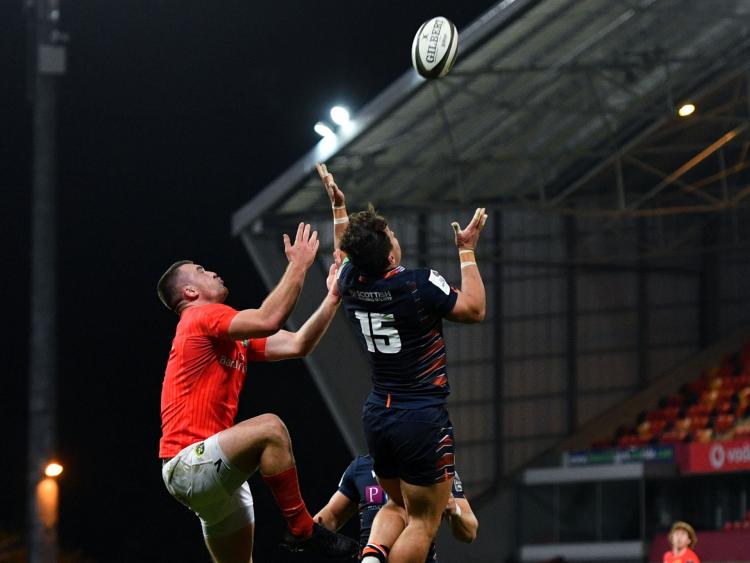 MUNSTER'S debutant winger Matt Gallagher enjoyed his first run out at Thomond Park in the red jersey, even if there were no fans there to see it.

Gallagher made a winning bow as Munster struck late to secure a dramatic 25-23 victory over Edinburgh in their Guinness PRO14 second round fixture on Saturday night.

Munster overcame their limited preparations for the game after two senior players in the squad tested positive for Covid-19 in the days leading up to the fixture, to score a nail-biting victory.

Half-backs Craig Casey and Ben Healy stole the show for Munster. Casey, who has been called up to train with the Ireland Six Nations squad this week, scooped the Man of the Match award, while Healy kicked 20 points. Both players are aged just 21.

It was an evening to remember too for Gallagher who moved to Munster from Saracens this summer.

Twenty three-year-old Gallagher is no stranger to Limerick as his grandmother Ann lives in Corbally.

Gallagher said: “I have been looking forward to this (Munster debut) for a long time, so I am really happy that we managed to get the win. Ben Sherman (Healy) slotted all the kicks, no, it was really good and I was really happy to get out there.

“Preparations were a little bit disrupted considering that it was the first time that it happened to us. The boys dealt with it really well. We managed to get all our clarity in with our on-line meetings.

“Like you saw, we managed to get the win, so considering it was a younger team and we all went out there and played our hearts out, I think we did well.”

Gallagher has settled in well to life in Limerick.

“It has been really good, all the boys have been really welcoming to me. Just being able to jump in with the rugby side has helped a lot as well.

"I have enjoyed Limerick a lot, it's a bit different to London! I have a granny here, it's all good, I get to see her a bit more.”

Next up for Munster is a Bank Holiday Monday, October 26 fixture with Cardiff at Thomond Park.