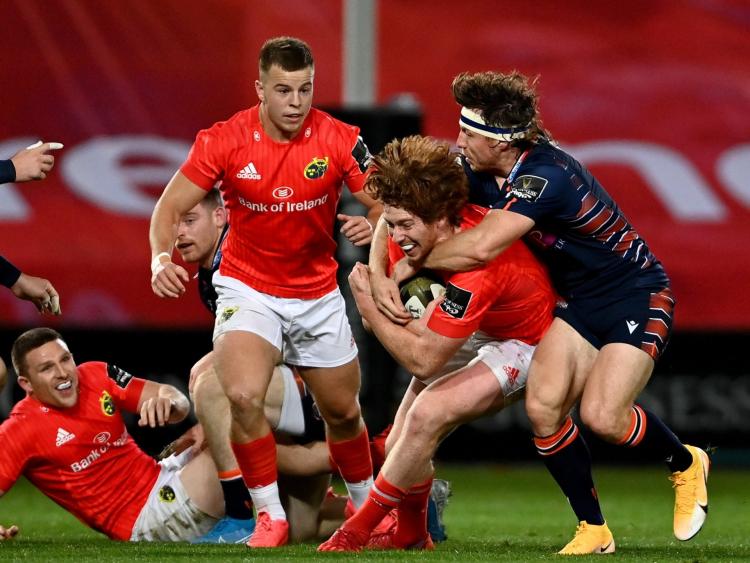 Ben Healy, of Munster, is tackled by Hamish Watson, of Edinburgh, during Saturday night's Guinness Pro14 fixture at Thomond Park

MUNSTER maintained their winning start to the new Guinness PRO14 season with a hard fought 25-23 victory over a gritty Edinburgh side at Thomond Park on Saturday night.

A 78th minute try from CJ Stander, converted by out-half Ben Healy, helped Munster edge past their visitors in a highly competitive game.

Munster's pre-game week had been disrupted by two confirmed cases of Covid-19 within the senior squad which forced the cancellation of two scheduled training sessions on Tuesday and Thursday.

In that context, this was a precious victory secured at an empty Thomond Park.

Academy out-half Healy came in for only his second senior start in Saturday night's game and kicked 20 points. Healy's half-back partner Craig Casey, also 21, walked off with the Man of the Match award in a very assured display.

Munster trailed 12-14 at the end of the opening half. The home side moved 6-0 to the good after five minutes after Healy landed two kicks at goal.

However, Edinburgh hit back strongly, with centre Mark Bennett scampering over for a 12th minute try, with match referee playing a penalty advantage for the visitors. Jaco Van der Walt's successful conversion made it 7-6 to the Scots.

A third Healy penalty had Munster 9-7 in front after 20 minutes, before prop WP Nel barged over for Edinburgh's second try with Van der Walt's conversion making it 14-9.

Munster, who lost flanker Tommy O'Donnell to a first half injury, did have the final say in the half when Healy converted his fourth penalty of the evening to leave just two points between the sides at half-time, 12-14.

Edinburgh led 17-12 early in the second half and again at 23-18 late on. However, Munster's grandstand finish won the day.