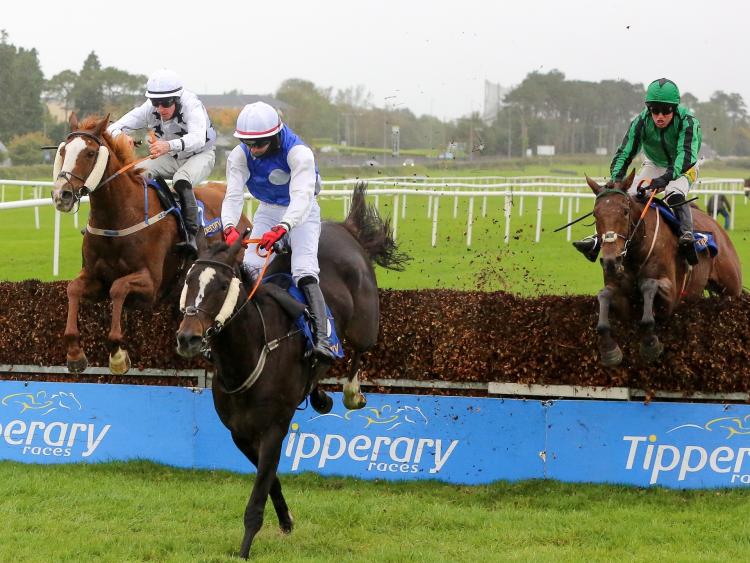 CLOGHER, Kilmallock trainer Austin Leahy was among the winners at Cork on Tuesday where Han Solo, in his daughter Susan’s colours, landed the first division of the 8f handicap.

Dylan Browne McMonagle got the 5/2 favourite home by a head from the Jim Bolger-trained Legal Thriller, the young Donegal apprentice completing a double having won the earlier 6f handicap on the Michael Browne-trained 28/1 shot The Cola Kid.

Aine O'Connor was once again seen to great effect when winning the bumper at Punchestown on Wednesday.

The Askeaton amateur partnered the Lorna Fowler-trained Colonel Mustard to a four and a quarter-length success over John Kiely’s Phillapa Sue in the bumper, leading before the straight and kicking clear over a furlong from the finish.

Henry De Bromhead sent out his Grade 2 winning hurdler Jason The Militant to win the opening division of the 10f maiden at Fairyhouse on Thursday.

It was a fair performance from the six-year-old which scored by a cosy three and a quarter lengths under Billy Lee for owner/breeder Peter Michael. It was the jockey’s 44th winner of the season.

Ballingarry jockey Lee added to that with an all-the-way success on Jackmel which gave County Meath trainer Kevin Smith a second career success and his first on the Flat in the 8f handicap at Dundalk on Friday night. The 11/2 shot beat Michael Halford’s Overtake by three-parts of a length.

The Andy Oliver-trained Make A Promise gave Lee another winner at Tipperary the following afternoon when landing the concluding 5f maiden at odds of 7/2.

Shanagolden jockey Chris Hayes did the steering as the John Oxx-trained Doolin Dancer won the opening 8f auction maiden at Killarney on Sunday. The Thomas Breen-owned two-year-old scored by three-parts of a length from the Michael Halford-trained Let Me Pass.

Knocklong trainer John Gleeson won the 2m1f handicap chase at Tipperary on Sunday with the six-year-old Jack Holiday. The strong 5/2 favourite made all the running under Conor Orr to win by a length and three-parts from All the Chimneys.

Princess Zoe landed a last-gasp success in the Group 1 Qatar Prix du Cadran at ParisLongchamp on Saturday to give both trainer Tony Mullins and jockey Joey Sheridan a first top-level success.

In a thrilling climax, Princess Zoe reeled in long-time leader Alkuin just yards from the finish to snatch the two-and-a-half-mile race for owners, brother and sister, Paddy Kehoe and Philomena Crampton.

The five-year-old was at least six lengths down with less than two furlongs to run, but she would not be denied as she reeled in Alkuin to win by half a length, the pair all of 15 lengths of favourite Call The Wind.

Mullins said, “I certainly didn’t think three months ago this as going to happen, but Joey Sheridan came down to work her last week and when she pulled up, I said we were going to win in France.

Sheridan, 18, could hardly believe his luck and said, “I got a lot of confidence off Tony. I rode her work the last time. He couldn’t have had her any more right for today and on her form, she had every right to be here. It means everything — it’s a dream come true.

"From riding ponies at home, seven years later to be winning a Group One is the stuff of dreams. It’s a fairytale. It’s only my second year riding.”

Dermot Weld and Christophe Soumillon were among the big winners at ParisLongchamp on Sunday where they combined to land the Group 1 Prix de l’Opera with Tarnawa.

Successful in the Prix Vermeille last month, the four-year-old might well now be aimed at the Breeders’ Cup Filly & Mare Turf in November after her battling success over the Jessica Harrington-trained Alpine Star.

"I specifically trained her with the autumn in mind this year. I did something similar last year with Eziyra, and she did me proud, but she just wasn't able to bring us to the heights that this filly has. I'd imagine she will now go to the Breeders’ Cup for the Filly & Mare race or the Turf.

"She’s also in the Fillies and Mares race at Ascot on Champions Day, but we will have to review it all and see how she comes out of Longchamp first,” said Weld.