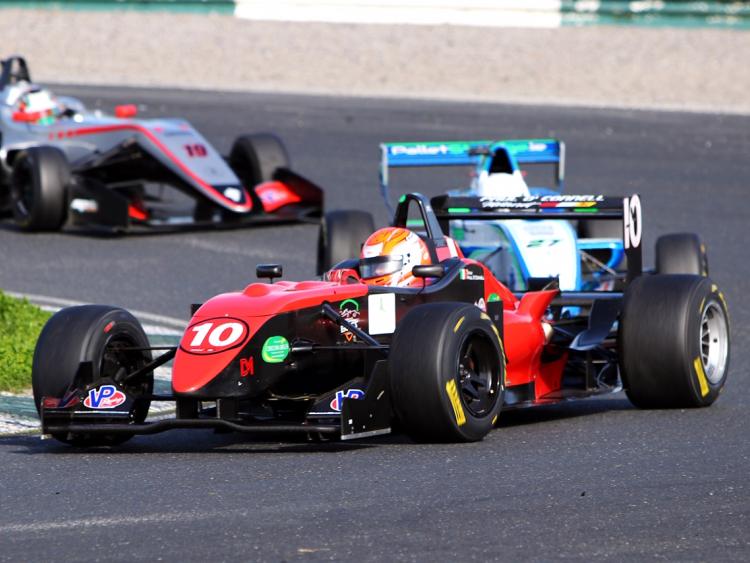 THE Finnstown Castle Hotel Formula BOSS Ireland championship was back in Mondello Park for rounds 4&5 of the series.

Overall BOSS leader Cian Carey in a 2018 F3 car grabbed pole in morning qualifying from Barry Rabbitt in a 2014 Formula Renault, Limerick's Paul O'Connell 2008 F3 car and Sylvie Mullins from Clare in his Gould V8 with the crisp Autumn air leading to some impressive times.

In Race 1 Sylvie Mullins was quick off the line when the lights went out and led into the first corner from Carey and Rabbitt with O'Connell fighting for position behind.

Mullins held onto the lead for a few laps but there was frantic overtaking behind. O'Connell was up to second by the end of the opening lap as Rabbitt also passed Carey before moving up another place a lap later with an overtake of O'Connell.

Mullins led for 3 laps but while extremely fast on the straights was struggling with understeer through the tight corners. Rabbitt drove around the outside of the Gould on lap 4 to take the lead with O'Connell following him through at the next corner.

Carey wasn't being left behind and soon up to 3rd. Rabbitt held onto his lead for 5 laps but in a great move O'Connell swept up the inside into the final corner and then Carey powered past Rabbit relegating him to 3rd.

Having cleared Rabbit, O’Connell really put the foot down and was able to set a new Formulaboss BOSS lap record as he managed the gap back to Carey.

The Limerick driver took the flag from the Dunshaughlin duo of Carey with Rabbitt coming home 3rd.

Race 2 was a titanic battle and all about pressure and it was Barry Rabbitt who was soaking it up despite the best efforts of O'Connell and then Carey.

A great start saw him fire the Renault into the lead as he got up the inside of Carey into the 1stcorner. O'Connell made a great move in turn 2 also to move up to 2nd and then spent 10 laps on the gearbox of Rabbitt while ducking either side of the leader looking to make a pass but unable to pass with the cars very evenly matched down the straights.

Carey tucked in behind the two leaders looking for the opportunity to make places and the three drivers soon pulled a big gap on the rest of the field, his persistence eventually paid off when Rabbit ran O’Connell wide allowing Carey to pass O'Connell on lap 11 and take up the challenge.

He tried repeatedly to overtake at almost every corner but was unable to make use of his cars superior pace to pass Rabbitt even on the straights with Rabbit putting on a masterclass in defensive driving.

O'Connell ran wide with a couple of laps to go and had to settle for third despite setting the fastest lap of the race while catching back up to the leaders.

The chequered flag came out after 18 laps with a delighted Barry Rabbitt taking the win by a cars length from Carey with O'Connell a mere 2 seconds back.

Due to O’Connell failing to finish two races Carey still leads the overall championship and is favourite to wrap it up when the final 2 rounds are run in a fortnights time again at Mondello Park.