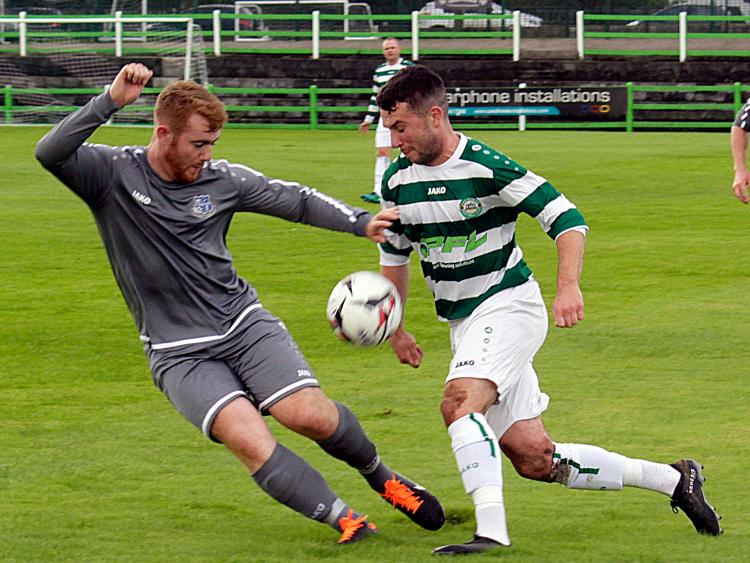 TOMORROW, Thursday, evening sees the Tuohy Cup continue with the highly anticipated clash of Pike Rvs and Ballynanty Rvs. The two sides met in the League a couple of weeks back when Ballynanty Rvs recorded a memorable 3-2 victory.

While the game is sure to attract soccer fans around the town all should be aware the game is a ticket only event with both clubs restricted to 100 people.

If we get a repeat of the League game, we are in for a treat. Balla come into the tie on the back of another exciting game last weekend when they drew 3-3 with Aisling Annacotty.

Pike Rvs had an easier run out when they beat Nenagh 4-0 in Crossagalla. By their own admission, the Hoops found it hard to break down the Tipperary side, relying on the introduction of Colin Daly and Eoin Hanrahan to finally take control.

It’s hard to know whether the Blues will be positive or negative after last week’s result. They conceded a late equaliser, but they also fought back from two goals down so it’s a case of glass half full or half empty!

Balla have shown they are capable of lifting their game for the big occasion, but they need to guard against complacency when they enter a game as favourites. Such is the case on Sunday when they meet a Janesboro side that are no pushovers.

Aisling travel to a Geraldines side struggling to break away from the drop zone. They came back from the dead to earn a point versus Balla last Sunday which may give them a pep in their step.

Pike Rvs should maintain their challenge with a win in Kilmallock. The county side are struggling to date and a visit from Pike Rvs is the last thing they need.

Fairview Rgs are also well in the hunt for honours with a couple of games in hand on the leading pack. On Sunday they host Prospect Priory where they should prove too strong for the visitors.

The remaining Premier fixture sees a Mungret Reg XI badly in need of points taking on a Coonagh Utd side on a high after last weekend’s 4-3 win over Prospect.

The Premier A League is turning into a fiercely exciting affair. Athlunkard Villa lead the way on 20 points from three sides on 16 points. On Sunday they host of the three, Newport in Lee Estate. Charleville with a game less played will be expected to take the spoils Hill Celtic.

Holycross also have a game in hand on the leaders and on Sunday they face a tough trip to Murroe who are just a point further back.

Division 1A leaders Hyde Rgs are not in action which gives Kilfrush the opportunity to join them level at the top of the table. In their way are third placed Summerville who are motoring well in the promotion race.

It’s a similar position in Division 1B. Regional Utd B who lead the way have a free weekend so their main rivals Pallasgreen can join them in first place if they can win at Mungret Regional.

Caherconlish and Meanus are joint top in Division 2A and both will be expected to continue their promotion surge when they visit Janesboro and Castle Utd respectively.