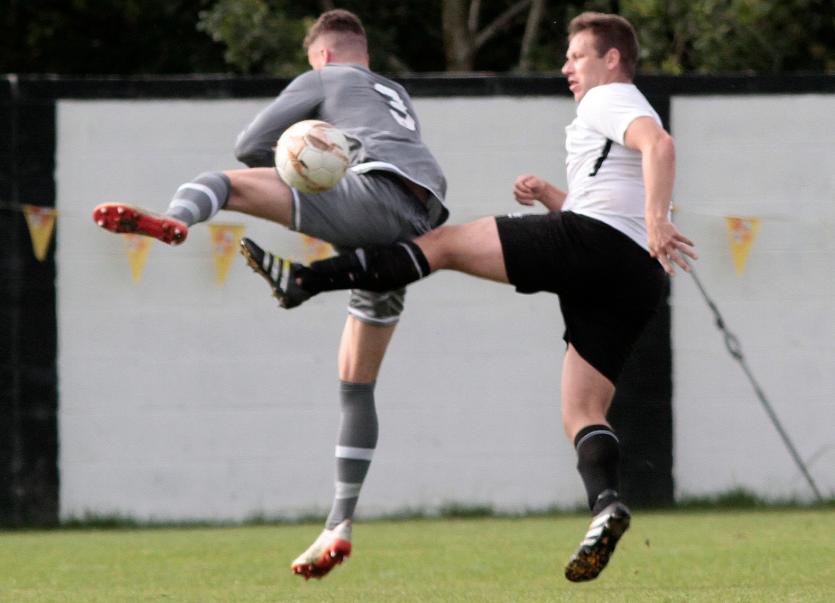 THE Covid-19 blues are affecting us all but those lucky enough to have made the trek to Annacotty on Sunday morning were dealt an antidote, when Aisling and Ballynanty Rvs  played out a thrilling 3-3 draw in a top of the table encounter. Played in glorious sunshine, the game had everything, including a Referee in Andy Hall, who recognises the game as a physical encounter, and didn’t blow for every challenge.

Balla, despite leading the way in the League, would have entered the game as slight underdogs, a tag they carry with delight. From the off they knocked Aisling out of their stride.

Aisling weathered the storm and took a 2-0 lead, reduced to 2-1 by half time. After the break Balla took charge and led 3-2 before a late equaliser ensured a division of the spoils.

It was a typical gritty performance by Balla. Captain, Dave Donnan, led by example with a superb performance.

For the home side, once again the silken skills of Conor Coughlan kept them on the front foot.

Early on Donnan put Alex Purcell behind the Aisling rearguard but his shot was blocked by the covering Thomas Clarke and from the resultant corner kick Dan Lucey headed narrowly over.

Midway through the half a ball into the area by the Jason Hughes saw the tireless Purcell harass the defence who only partially cleared and when the ball fell to Adrian Power he hit a rasper that rattled the crossbar before being cleared.

Aisling took the lead on the half hour mark when a quick breakaway saw Coughlan play a super pass from half way that put Adam Foley clear and the League’s top scorer rounded the keeper before forcing the ball home.

Killian Moloney forced a fine save from Stephen McNamara to deny Aisling a a second but it was temporary relief as minutes later Thomas Clarke scored from Tracey’s corner kick.

Aisling were hardly done celebrating when McNamara’s long clearance fell to Arron Nunan who volleyed home on half time.

On the resumption Balla chased the game and had chances from Power and Nunan and at the other end McNamara made a superb save to deny Shane Clarke.

Balla were back on level terms midway through the half when Donnan was upended in the area and Nunan blasted home the spot kick.

Five minutes later it got even better for the visitors when Liam Brock’s cross was inadvertently blasted to his own net by Shane Tracey.

Balla had a great chance to wrap it up when Donnan won possession in midfield and played a one two with Purcell to get in on goal but an excellent save by Mulready kept it at a minimum.

With Aisling’s firepower you felt they were always going to get another chance and so they did. Mulready’s long delivery was flicked on by Shane Clarke, back heeled by Thomas Clarke and Aaron Murphy let fly with a shot from outside the box that found the corner of the net.

Coonagh brought their points tally to double figures on Sunday with a super comeback win against Prospect Priory.

Two goals from Trevor Hogan had Prospect well in command after a half hour bit Martin Deady struck before half time to keep Coonagh in the tie.

Just after the restart Coonagh drew level when Niall Earls let fly with a daisy cutter from 35 yards into far bottom corner of the net.

Prospect responded well and Hogan completed his second hat trick in a week to restore the visitors lead on 70 minutes. With ten minutes remaining Ronan Lynch was fouled in the box  Martin Deady scored his second from the spot to make it 3-3.

On the front foot, Coonagh went for the jugular and got their reward with two minutes remaining when Eoghan O’Neill finished from close range after a goalmouth scramble.

The relegation six pointer in Garryowen looked to be going the way of Kilmallock before a good comeback by the home side gave them what could prove a vital share of the spoils.

‘Dines opened the scoring after nine minutes when Shane Cox played Karl Turner in to score.

Kilmallock bounced back in style. Killian Hayes equalised on 25 minutes and just before the break Hayes turned provider for Mike Houlihan to make it 2-1.

When Tommy Heffernan rounded the keeper to make it 3-1 with 20 minutes remaining it looked curtains for ‘Dines. However, not for the first time this season, the home side showed their resilience and ten minutes from time they pulled one back when Shane Byrne netted.

The game was tied seven minutes from time when Christy O’Neill delivered to the back post when Turner took the ball on his chest before netting.

Pike Rvs move to within two points of leaders Ballynanty Rvs with a game less played, following their 4-0 win over Nenagh.

The Tipperary side proved a stubborn bunch and held the Hoops scoreless at the break. The introduction of Colin Daly and Eoin Hanrahan gave Pike the bump they were lacking in the opening half.

A brace from Kieran Hanlon killed off the tie before Eoin Hanrahan  and Steve McGann tacked on later goals.

Regional paraded new signing Joel Coustrain in their home tie with neighbours Mungret Reg but it was team mate Jack Arra who stole the limelight with a five goal haul.

Five goals to the good at the break, Regional tacked on a couple more after the break. Former Shamrock Rvs player Coustrain got on the scoresheet along with Shane Dillon.

The Tuohy Cup kicked off on Thursday evening when Aisling edged out Coonagh Utd to progress in the Premier trophy.

Aisling did not have things all their own way as Coonagh battled gamely throughout. With Ken Meehan add ed to the squad it gave them a more solid look at the back.

They were however breached after the break when Adam Foley scored from close range to give Aisling the lead.

Coonagh went in search of an equaliser but it was Aisling who came up trumps again. Shane Tracey was on the end of a good move involving the impressive Conor Coughlan.