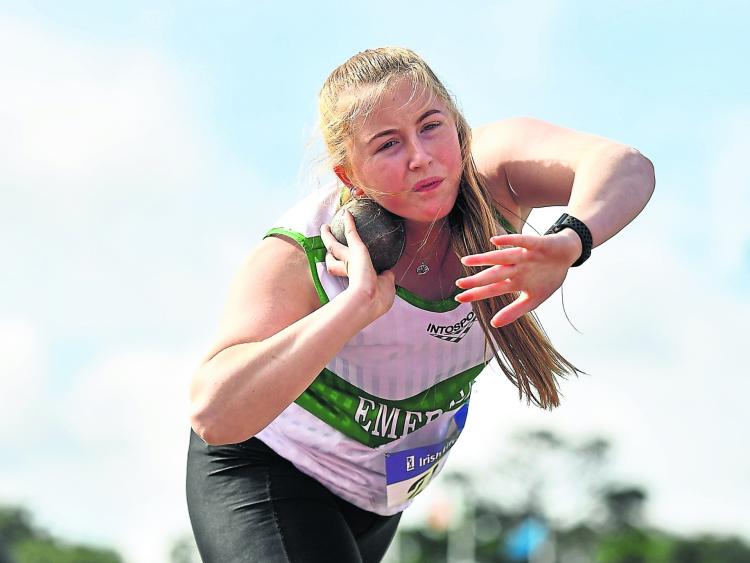 Ciara Sheehy, of Emerald AC, on her way to winning the Junior Women's Shot Put during the Irish Life Health National Junior Track and Field Championships at Morton Stadium, Santry

HIGHLIGHT of the weekend from a Limerick perspective was the gold medal won by Geoffrey Joy-O’Regan, of Sunhill Harriers, in the High Jump on day two of the National Junior Championships at Morton Stadium, Santry.

His clearance of 1.96m was enough to give him a narrow victory over Jack Forde (St Killians) and Adam Nolan (St L.O’Toole) both of whom cleared 1.93m.

Aimee Hayden, from neighbouring Newport won the 800m outright in a new championship record of 2:08.43.

Half Marathon
Hosted by North Cork AC and encompassing the counties of both Cork and south Limerick this year’s Charleville International Half Marathon was restricted to elite athletes only.

Around the Country
Mark Carmody (An Brú) continues to shine setting a new pb of 1:58.63 and coming 3rd in his 800m heat at the Morton Live Athletics meet last Friday night.

He followed that up 17 hours later with a Silver medal after a time of 1:59.15 in the 800m at the Northern Ireland and Ulster Athletics Championships in Belfast.

Noel Richardson also from Limerick was 3rd in 29:45. Emerald’s Sandra (4,112 pts) and Elaine Ball (3,911 pts) were 5th and 7th respectively at the Waterford Invitational International Heptathlon.