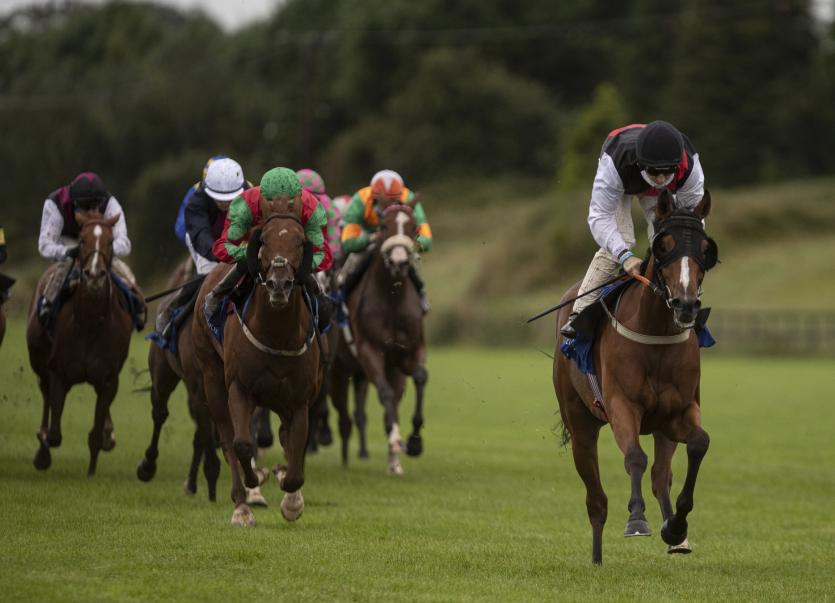 Dragon of Malta, trained in Kilmallock by Pat O’Donnell, with Colin Keane, on board, come home the clear winners of the seven-furlong handicap at Limerick on Friday. Photo: Patrick McCann/Racing Post

Lee has enjoyed some great days with trainer Ken Condon in recent times and the pair combined to win with the four-year-old which defied both a wide draw and top-weight to win.

Owned by Richard Barnes, the 14/1 shot swooped late to deny the Johnny Murtagh-trained Lord Rapscallion by three-parts of a length.

In-form Limerick jockey Lee took another of the weekend’s big handicap races when partnering the Johnny Murtagh-trained Sonnyboyliston, owned by the Kildare Racing Club, to a facile success in the Irish Stallion Farms EBF Northfields Handicap at the Curragh on Sunday.

The well-backed 4/1 chance won by all of four and a half lengths from the Michael Halford-trained Finans Bay to cap a big weekend for the local trainer.

Sent off at odds of 12/1, the nine-year-old made the running from the third fence and went clear on the long run to the line to beat Weihnachts by all of 14 lengths.

Hayes said of the Frank Moynihan-owned winner, “We went wrong with her last year by running on the Flat and in a hurdle race as we should have stuck chasing as she is an out and out chaser.

"I had her ready for the Bishopscourt Cup which was abandoned and I did fancy her today but I thought the ground would be better. Rachael gave her a great ride and did everything I asked, you can’t get better than Rachael.

"We’ll see what the handicapper does but she might go to Listowel on the Monday, if not there is a race in Navan the week after.”

Billy Lee and Ken Condon took the rated race with Teed Up at Galway on Tuesday. The 7/2 favourite led early in the straight and was always holding the late run of the Joseph O'Brien-trained Dance Jupiter.

Lee and Willie McCreery took the opening division of the 7f handicap with the gambled-on 4/1 favourite Petticoat Rule at Cork on Wednesday. The three-year-old just got on top inside the final furlong and held on to beat John Geoghegan’s Silk Cravat by a head.

Athea trainer Eoin McCarthy closed out the meeting with a Joe Doyle-ridden winner as Fascinating Spirit landed the second division of the 7f handicap.

"She was just touched off here over the same course and distance recently so it nice that she’s got her head in front. She is well bred, has a great pedigree and ground depending she will go to Listowel now.”

Billy Lee was a winner again at Navan on Thursday where he teamed up with Charles O’Brien to land the 5f nursery handicap with the C’est La Vie Syndicate-owned Tammany Hall.

The 5/1 chance came from the back of the field to beat the Joseph O'Brien-trained 7/4 favourite Tar Heel by half a length.

Kilmallock trainer Pat O’Donnell won the 7f Shannon Handicap at Limerick on Friday with Dragon of Malta. In the colours of owner Anthony Hennessey, the 9/2 co-favourite was ridden by Colin Keane, a late substitute for Shane Crosse, and came home three and a quarter lengths to the good over the Denis Hogan-trained Sin E Shekells.

Charles Byrnes saddled Advance Virgo to finish second to Pak Army in the 11f handicap but he enjoyed far better luck in the concluding 2m1f handicap where the Martin White-owned Poseidon was the comfortable winner.

The gambled-on even money favourite, ridden by Sam Ewing, was always holding The Jam Man and he won by three-parts of a length at the line.