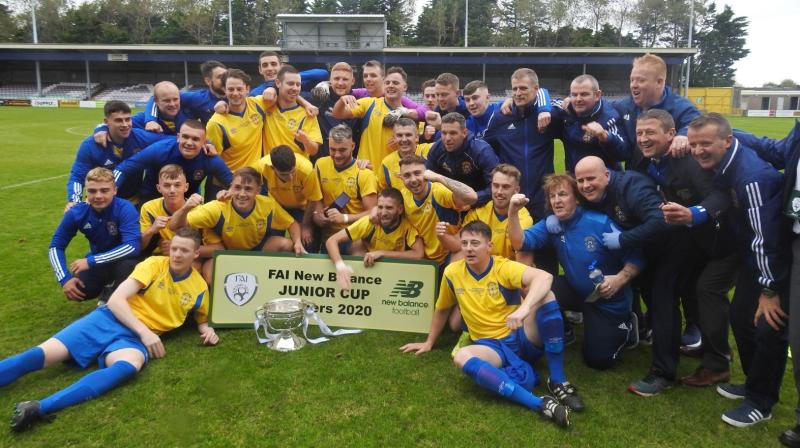 WHO would want to meet Fairview Rangers in an FAI Junior Cup Final?

Be they favourites or underdogs, the Limerick side seemed to have the jinx on whomever they meet in the decider.

On Saturday afternoon the Blues captured their ninth FAI Junior Title when they beat Dublin Champions Usher Celtic in a tight and tense affair in Eamonn Deacy Park, Galway.

The game was decided by a single goal scored by man of the match Clyde O’Connell and it was no more than the Limerick side deserved, although some outstanding defence was required in the latter stages to hold on for victory.

Much was made of the absence of spectators at the game and although it was unfortunate that the fans were denied access, it had little effect on the players who rose to the occasion, to a man.

Clyde O’Connell deservedly picked up the man of the match accolade, his third in successive FAI games, but many of this team mates would not have looked out of the place collecting the award.

Goalkeeper Aaron Savage was rock solid between the posts making some crucial intercepts as the game wore on. O’Connell’s partner at the heart of the defense was equally impressive and his no nonsense style complimented his colleague.

Bradley in his defensive roll and Judge in his attacking roll, while Frahill proved crucial in the latter stages with some vital interceptions.

Up front youth Player, Conor Keane, was making some excellent runs and had the opposition on the back foot early on while James Fitzgerald was also superb with his deliveries, one of which led to the winning goal.

Striker Ross Mann ran himself ragged throughout even when there was no hope in winning the ball. His selfless effort took a lot of pressure off his back four. Eddie Byrnes and John Mullane were introduced in the second half and both played their part in the victory.

Special praise goes to the management team of Jason Purcell and Stewart Fitzgerald who guided the side to victory, their third time climbing the winner’s rostrum as managers (Purcell also has four medals as a player – an incredible record by any standards).

For all the flair on offer there was very little in the way of clear cut chances. Both sides were guilty of good build up and poor final ball.

Silvin Voivod was the first keeper in action going low to save a header from O’Connell from O’Connor’s free kick.

Minutes later the impressive Graham Curran pulled a ball across the Fairview goalmouth but Slattery cleared with Celtic charging forward.
Jeffery Judge picked out a great run by Keane but Darren McDonnell got back to make the block.

Fairview escaped ten minutes before half time when O’Connell was unsighted and placed a back pass at the feet of the prolific Stephen Donnelly.

The Usher striker touched the ball past the advancing Aaron Savage and with an open goal at his mercy steadied himself which allowed O’Connell get back to make a superb saving block.

Before the half time whistle Fairview also squandered their best chance. A super ball by Fitzgerald over the heads of the defence fell invitingly for Judge but he uncharacteristically blazed over from six yards.

The second half saw both sides slip into a more defensive mode and both defences were mopping up anything that came their way.

The introduction of Eddie Byrnes gave Fairview the bump they were looking for. He won a good ball on the line to feed Judge and his through ball saw Ross Mann fouled on the right.

From the resultant free kick, Fitzgerald’s inswinging delivery was met by O’Connell who headed in despite the best efforts of Stephen Doyle on the line.
As expected Usher piled on the pressure in search of an equaliser and that's when ‘View were at their best, batting away anything that came near the danger zone.

In fact the nearest to another goal was from a Fairview break when Frahill and Mann combined well but the latter was denied twice by the keeper.

It didn’t matter in the end as Fairview held on for another memorable win that they hope will kick start another golden era.