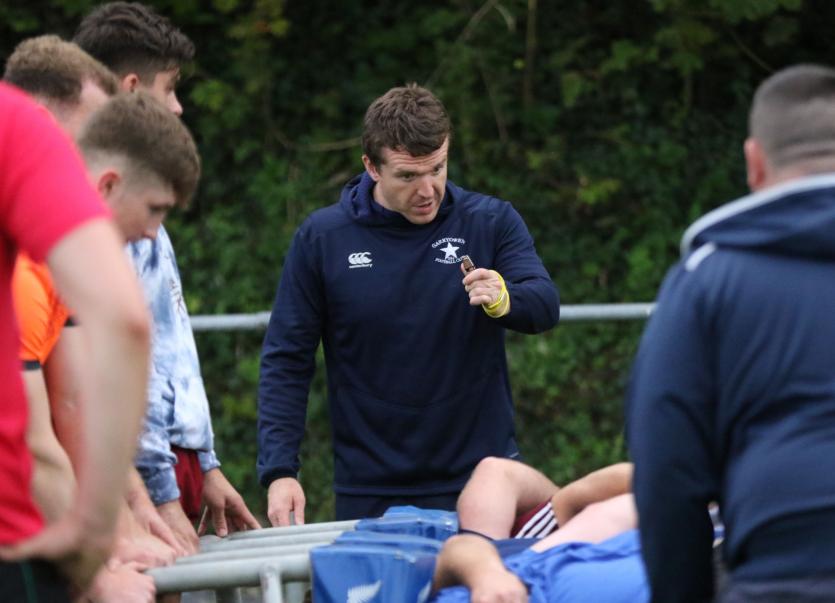 Mike Sherry putting the Garryowen FC forwards through their paces during a training session at Dooradoyle Picture: Kieran Ryan-Benson

“IN fairness to the group I really appreciate the numbers we are getting at training. It is a crazy time in the world with Covid-19.

Mike Sherry is gearing up to take the Garryowen forwards for their latest 'new normal' pre-season training session at Dooradoyle.

It's just over a week to the start of the 'Light Blues' competitive season, a Bank of Ireland Munster Senior Cup quarter-final fixture on Saturday, September 19.

The loss still rankles with the 'Light Blues' according to Sherry.

Garryowen's players and management have had a long time to stew on that 7-11 loss as the league was cancelled in mid-March due to the coronavirus pandemic.

Mike Sherry said: “This is our eighth week being back pre-season training. We had a block of three weeks, a down week and we're back in now again. It is great to be back. We had a long time off, the bones of five, six months. Everyone was mad keen to get back.

“Obviously there are restrictions and regulations on what we can do in training. We are not complaining, we are just happy to the back out training and getting ready for the season.

“For a day or two when last season was called off, you kinda feel sorry for yourself because we were going well. I felt we were building the whole time. We were looking like we might be getting a home semi-final in the All-Ireland League and I would have fancied our chances.

“It was bitterly disappointing to end the season on the note of losing to Munsters' at home. It still stings. We haven't played a game since that obviously.

“For a day or two you are feeling sorry for yourself, but you move on. There are things that are a lot more important and a lot more serious going on in the world at the minute.”

While professional rugby has made a successful comeback in the past month, the club game is at a different level. The provinces have full-time players, while club players have day jobs or are third level students.

Mike Sherry said: “With us, guys are going out doing their 9-5 jobs. They are in college. They are not working at the minute. We're not their baby sitters. They are big boys, they can live their own lives.

“I would hope and think that they are adhering to everything.
“We have a check-in system. If anyone is feeling in any way off, they are not to come to training, close contact, anything like that, we are taking absolutely no risks. It is the new normal. We have to get used to it.

“If you badly need a guy at training and he is feeling off, you just got to accept it. You can't come and watch training, all this type of stuff. You just have to get used to it.
“On the professional side, it is very easy for Johann van Graan to say, 'look lads, I'm asking ye to keep a low profile, stay in doors, come to training, go home'. That is their 9-5 job. They are going home recovering, so you can know where people have been. You can manage it easier that way. They have the advantage. Again, it's the new normal.”

Former Munster hooker believes Sherry it is 'almost inevitable' that there will be cases of Covid-19 recorded within rugby clubs in the coming weeks and months.

“Schools are back now. No one knows what is going to happen in terms of cases. Look, it is almost inevitable that it will get into clubs, it is just how you manage it.

“We've a Covid officer, Jim Gibson out here who is guiding us. It is new territory for everyone. There is no showering and eating here after training sessions, for instance. All of that is gone.

“In fairness to the group I really appreciate the numbers we are getting at training. It is a crazy time in the world. A lot of lads could be sitting at home and I would have no issue with them sitting at home and saying I'm not taking that risk. I think they feel safe coming out here.

“What we have brought in and what we have in place has allowed us get through a lot of work and have the numbers we have. It is in the background now and we are getting ready for games.

“The first few weeks we didn't know what the hell was happening. Now we're kinda used to it and we have good systems in place. We're motoring along, getting ready, but we are in bonus territory in terms of being able to play sport.”

Garryowen kick-off their competitive season when hosting the winners of the Old Crescent v Cashel fixture in the quarter-finals of the Munster Senior Cup on Saturday week at Dooradoyle.

Beyond that senior clubs are looking forward to the start of the new Energia Men’s Community Series on September 26 with Garryowen in Munster Conference 1 alongside Young Munster, Shannon and Old Crescent, where they join Cashel, Cork Constitution, Highfield and UCC. The 'Light Blues' opening fixture will be away to Highfield.

The shortened Energia All-Ireland League season will then get underway in the New Year.

Mike Sherry said: “The new structure is exciting. There is a lot of rugby, not many weekends off. It is a really good opportunity for us to test the squad depth, give young players an opportunity, you are not straight into the thick of AIL. It is exciting. It's all new.

“The prospect of not having crowds at the local derbies will take away from it definitely. You won't have the cameras piping in sound from the crowd.
“The Friday night lights games are well attended and it does bring an extra element. But look we have to get on with it.”

So does Sherry miss playing rugby at a professional level?

“I don't miss playing at all. I was, truthfully, very nervous about moving on after rugby and what I would do. But I think as all good clubs should be, Garryowen provided me with an avenue to explore coaching, get back involved with the club after being 10 or 12 years with the Munster set-up.

“I absolutely love coaching. I didn't think I would. I was very nervous coming out here at the start of last year, but the coaching ticket that was here, it's a brilliant group of lads. I haven't looked back.”

“I have been working remotely from the start, being in the office twice. It has been challenging at home with three young kids when creches were closed, starting a new job, but I'm really enjoying that as well. It's something totally different.”