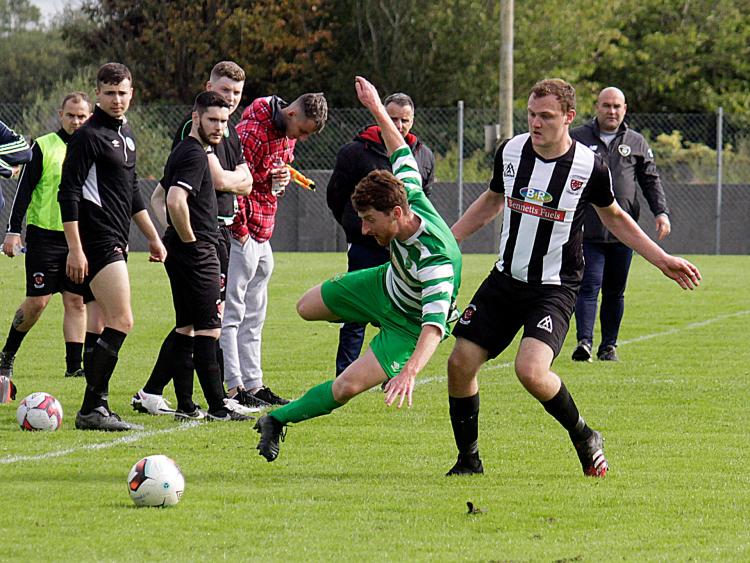 PIKE Rvs took the points on offer at the Pike Club with a 3-0 win over Regional Utd on Sunday.

The scoreline suggests an easier task than it was and while the home side never really looked like losing, they needed a number of superb saves by Gary Neville to keep the visitors at bay.

Pike opened the scoring when Danny O’Neill’s cross into the area caught the Regional defence ball watching as Eoin Hanrahan arrived at the back post to nod home.

With the game evenly poised after the break, Steven McGann picked out the unmarked Kieran Hanlon who kept his cool amid the hollers for offside to make it 2-0.

The same pair combined again shortly after. This time Hanlon was the provider and McGann fired home from the edge of the box to complete the scoring.

Aisling Annacotty remain the only side with a 100% record in the Premier League following their win over Prospect at Annacotty.

Played at a resplendent grass pitch in Annacotty, the home side were superb and one Shane Stack put them on their way it was one way traffic.

Shane Clarke and Adam Foley both claimed hat tricks. Keith Mawdsley scored twice and Shane Tracey made up the tally. Trevor Hogan replied for an out of sorts Prospect XI.

Leaders Ballynanty Rvs dropped two points in their title quest when they were held at home to Nenagh AFC.

Adrian Power out Balla in front on the half hour mark but failure to take their chances cost the home side when Nenagh were awarded a sot kick on 77 minutes.

Dan Butler’s effort was saved but the striker followed up to tuck away the rebound.

Two sides who were written off by many before the season started were glad to settle for a share of the spoils that keeps both sides mid table.

Both sides had chances to win it but defences proved best, in particular Coonagh Utd goalkeeper Jose Zaquieu who made a number of fine saves.

An important game at the foot of the table in Garryowen on Sunday saw Mungret Reg take the spoils in a hard fought game versus Geraldines.

The only goal of the game came from a free kick on the edge of the box superbly finished by Kian Barry midway through the first half.

‘Dines keeper Pat Reardon turned in a fine performance keeping the visitors from adding to their advantage but his forwards could not conjure up an equaliser so three vaulable points head to Mungret.

Fairview Rgs faced the strange situation of keeping their push for 2020/21 Premier League honours on track with one eye on the 2019/20 FAI Junior Cup final next weekend.

They achieved both. With the three points on board they also got a good run out allowing managers Jason Purcell and Stewart Fitzgerald got to iron out a few kinks while racking up six goals along the way.