Treaty United's Aoife Horgan's star on the rise in WNL 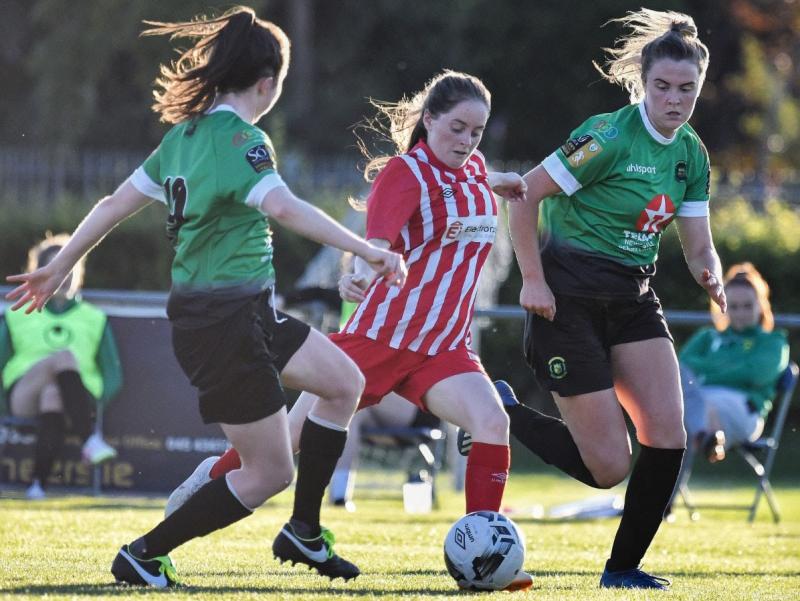 Aoife Horgan, centre, in action for Treaty United in the Women's National League

AOIFE Horgan is such a good player that when she was 12 years of age, a row broke out between two clubs about whether she should be allowed to play in a Senior Cup Final.

One club argued that she was too young, the other stated that it would be crazy to not let such a talented player feature. And people are going to be talking about her for many years to come.

With two goals already scored this season in the Women's National League with Treaty United, Horgan is now being recategorised from One To Watch to One To Mark Closely.

According to Treaty manager Dave Rooney, there is an extremely bright future ahead for the Republic of Ireland Women's Under-17 international because she is a forward who craves scoring goals.

"Everything is natural to her. The coaches at Lifford Celtic did an incredible job with her and she has really come on. I think she can go right to the top in the game," said Rooney.

"We've got some really exciting players in our Under-17s and some who have come into our senior team and Aoife is definitely in that bracket. She is someone who has so much potential and will only get better by playing in this League."

Horgan has settled quickly into the role of leading the line for Treaty - scoring against both DLR Waves and Bohemians - and the fact that her sister, Rebecca, is also on the team surely helps.

Treaty captain Marie Curtin gushes about her team-mate when quizzed on her ability and she can barely hide her excitement when talking about how far Horgan can go in the game.

"Aoife is a star. Aoife is going to go on to do bigger and bigger things. She is someone who will create a lot of chances and she will be upset with herself if she doesn't finish them, which is good because she sets high expectations for herself," said Curtin.

"She's so good. She scores goals and that is the hardest thing to do in football. She is dynamic on the turn and is such a naturally gifted footballer so it's huge for us to have someone of her capacity in the squad."

Treaty take on Athlone Town on Saturday hoping to pick up their third straight win of the season. If they can supply service into Horgan then few would back against her from adding to her goal tally.