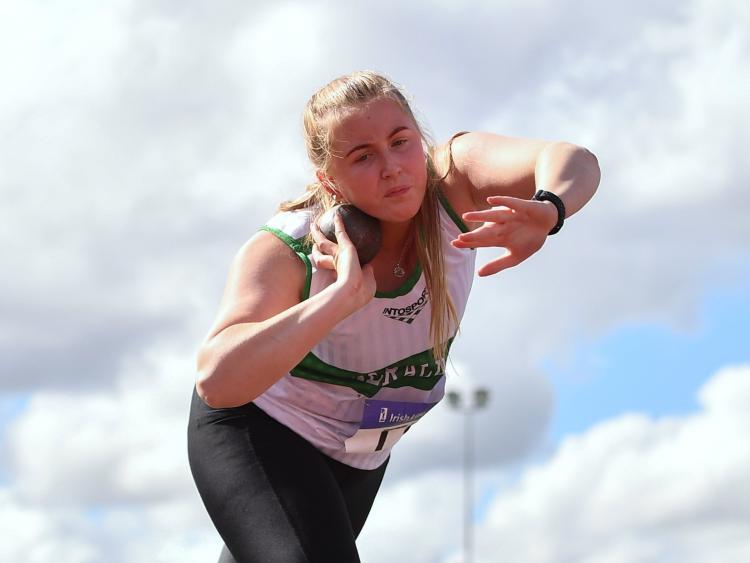 Ciara Sheehy, of Emerald AC, competing in the Women's Shot Put event during the Irish Life Health National Senior and U23 Athletics Championships at Morton Stadium

HELD in the Morton Stadium Santry, Limerick's best athletes again made their way to the capital for the second weekend of the national Championships.

There was a silver medal for Emerald’s Sarah Lavin in the 200m. She led for much of the race and forced Brandon’s Phil Healy to dig deep before finishing second in 23.74.

Lilly-Ann O’Hora (Dooneen) was another Limerick Silver medalist taking a very close second in 100mh in 13.73, just 0.06 seconds behind the winner.

Amy O’Donoghue followed up last weekends gold by also taking Silver this time out in the 800m. She finished a near second in 2:09.99 after previously winning her heat (2:12.58).

Ciara Sheehy (Emerald) was the first Limerick medalist of the weekend with Silver in the Discus on day 1 with a throw of 41.94m.

The Emerald duo of Paul Costelloe (22:10) and Rory Clothier (23:94) were 2nd and 4th in their heats respectively but did not reach the final.

THE Kilmallock duo of John Paul McCarthy and Donie Dwane travelled to Galway and completed the 5K in 17:52 and 18:56 respectively. Robert McCarthy of Dooneen finished in 18:59.

The National T&F Championships were held over the 19th and 20th August at the Morton Stadium in Santry. Some participants would make their way to the Sydney Olympics a few weeks later.

One of those was Tom Comyns representing Limerick AC, but formerly of Dooneen AC, who took Bronze in 200m (21.09 secs).

THE BLE National Track and Field Championships were held at Banteer.

Limerick native Brendan O’Regan, but studying at UCC won the 100m and 200m double recording times of 10.9 and 21.6 respectively.

PROVISIONAL dates have been for the Limerick County Cross Country Championships. They are of course dependent on the on going situation regarding Covid 19.