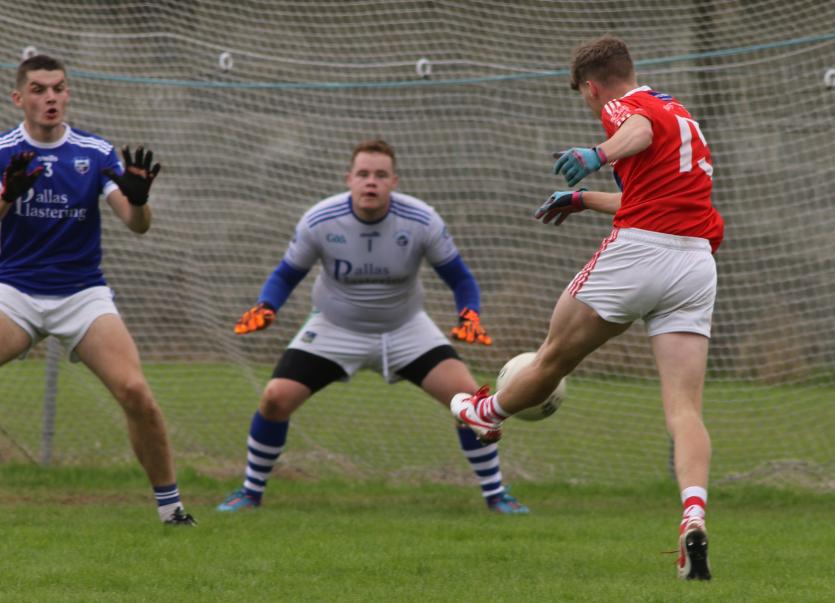 Mungret's Shane Barry crashes to the net on his way to a hat-trick of goals against Kildimo-Pallaskenry PIC: Wanda Dwane

THE four final round group games have confirmed the eight quarter finalists for the Griffin Coaches Limerick Intermediate Football Championship.

The championship now breaks until the weekend of September 18-20.

All fixtures for the knockout stages are already confirmed here

The men from Foynes-Shanagolden march on into the quarter finals with a 100% record. Goals from Adam Kearns and Ian Ryan helped them into a 2-8 to 0-6 half time lead in Mick Neville Park.

Bidding to make an immediate return back up senior, St Senans powered over the winning line in the second half with James Naughton and Sean McSweeney getting further goals.

Chris Browne (goal) and Anthony Neylon (5frees) tried to keep Bruff in touch but the south Limerick men are now into the relegation play-offs.

Both were already assured of quarter final places but it's the men in red that romped into the final eight with his big win.

Mungret were 0-8 to 0-1 up at half time - they have five scored before Kildimo-Pallaskenry opened their account in Clarina.

The second half brought a hat-trick of goals for Shane Barry.

This was a winner takes all tie in Caherconlish. St Patricks had 1-2 scored before Pallasgreen opened their account and by half time it was 1-5 to 0-5 with inter-county man Brian Fanning among the Pallas scores.

In the second half, there was an early goal from a penalty for St Patricks and Pallasgreen were reduced to 14 men. The scorebaord was now 2-6 to 0-5. Aaron Greene and Kevin Barry had scores for the east Limerick men but it's the relegation play-off for them as St Patricks booked a quarter final spot.

The city side won this top of the table tie with both advancing to the quarter finals.

An early Eoin Murphy goal helped Claughaun into a 1-5 to 0-5 half time lead.

In the second half points from Jack Hennessy and Tadhg Bennett kept Claughaun ahead despite Rathkeale scores from Josh O'Connor and Darren Jones, among others.