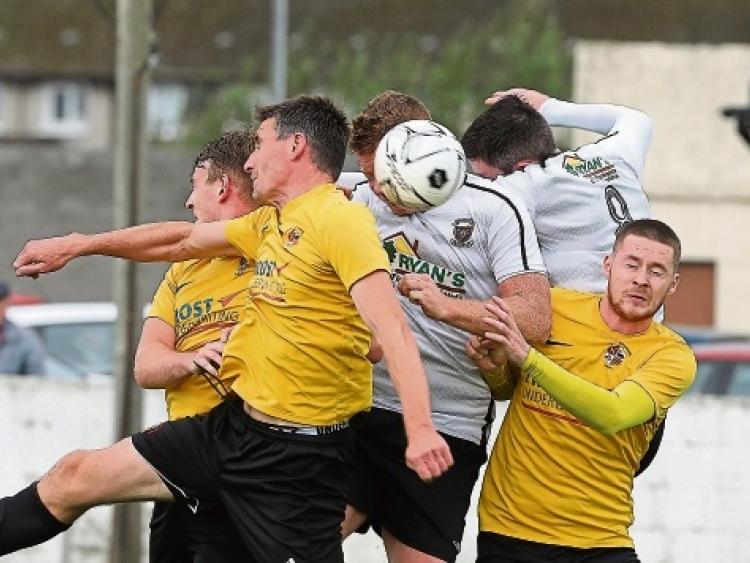 Action from Janesboro's meeting with Aisling Annacotty from last season

THE LDMCs Premier League continues apace this Thursday evening with a full list of games.

League leaders Ballynanty Rvs will be fancied to take the spoils at an inexperienced Mungret Reg side.

David Dunphy, Mike Considine and Derek Braddish have assembled a good young squad and any doubts raised about their experience and temperament were answered in their last two outings, wins against Pike Rvs and Regional Utd.

Balla' lost scoring sensation Conor Ellis to injury versus Pike but his team mates showed they are not a one man team. Aaron Nunan scored the winner for Balla in their last two outings and whether Mungret have the wiles to deal with him remains to be seen.

They are a young side who feed on confidence so a good start is vital if they wish to dent the home side’s run.

Pike returned to winning ways last weekend with a hard earned win at Geraldines and they would expect to take the points again when Coonagh come to Crossagalla.

Coonagh went down to Aisling last weekend, but John Mulready in the visitors goal made a number of fine saves that gave the score line a tainted look.

Pike, hurting from defeat to Balla, will be keen to avoid another setback which makes the prospect of a shock even more remote.

Prior to the start of the season Janesboro lost the bulk of last season’s squad and fears were expressed that ‘Boro would struggle this season.

Jason O’Connor and Co had other ideas and after building a team from scratch they have had a great start to the season and on Thursday they put their progress to the test when they welcome high flying Aisling Annacotty.

The Munster champions are on full points from three games and are brim full of confidence. It will take a mighty effort to dent that.

Two teams badly in need of a win come into the fray on Thursday when Regional Utd entertain Geraldines in Dooradoyle. Regional started well versus Balla last weekend but were unable to make their chances count against a mean Balla defence.

They will need a big improvement if they hope to be challenging this season. Geraldines have yet to find their mojo but showed against Pike they can lift their game. They need to do it on Thursday.

Prospect Priory, with just one point on board, won in a 2-2 draw with Nenagh last weekend, face an important game if they hope to get their season going when they host a pointless Kilmallock XI. The County side have been struggling to get any kind of form going but without joy.

While it's a bit early to be pinning teams to relegation or promotion it is vital to be beating those sides around you, which should add to fray.

Fairview Rgs continue their preparation for their upcoming FAI final with a home tie versus Nenagh. Fairview won with ease against Mungret last weekend and form suggests they should add to thier points tally against a Nenagh side who started brightly but slipped somewhat since.

Granville Rgs and Ballylanders are two sides who have started the season well and they promise a tight game while Summerville Rvs, after a slow start, have recovered well and host Knockainey at Portland.

Geraldines v Star Rvs is a game where both sides are in need of points as are Patrickswell and Shelbourne B.