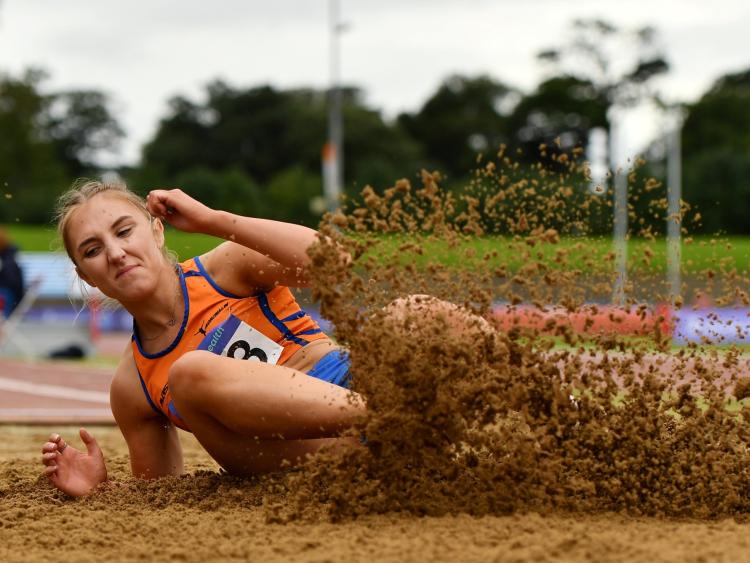 HELD over two days and two weekends without spectators to comply with Covid-19 safety regulations, several Limerick athletes made their way to Santry Stadium, home of Clonliffe Harriers on Saturday and Sunday.

There was some excellent performances and a number of national medals returned to Shannonside.

HIGHLIGHT of the weekend was a first National Senior outdoor title for Emerald’s Amy O’Donoghue. After Silver in 2017,2018 and Bronze last year.

At 100m, her Emerald clubmate Sarah Lavin took silver in a time of 11.83 in a photo finish for second and third positions.

Earlier, there had been a Silver medal for another Emerald athlete, Ciara Sheehy who was second in the hammer with a throw of 49.37.

DOONEEN’S Cathal Locke went one better than last year taking a superb silver medal in the 400m hurdles in 52.75 after previously winning his heat in 57.74.

Clubmate Seán McCarthy was 5th in his 400m heat in 52.13. In the javelin, Christian O’Connell from Limerick AC took the U23 Bronze medal having been 9th overall with a throw of 49.71m.

Cormac Downes ran a pb of 4:29 in the 1500m at the National championships.

He had previously won the same title in 1977. 17 year Paul O’Brien took Silver in the 100m just edging fellow Kieran Finn (also from Limerick) with both tied on 11.28 secs. Frank O’Mara pushed Eamon Coughlan finishing a close second in the 1500m in 3:40.36.

Pat Hartigan (Limerick AC) was second in the Shot Put with an effort of 14.59 having previously been second in 1975,77 and third in 1972. Bernie Hartigan took the Bronze medal in the Discus.

Margaret Crosse was third in the Javelin with 38.58 while Ann Nevin (Limerick AC) was fourth in the High Jump clearing 1.66 metres.

THE Cook Ireland Women’s Mini Marathon is taking place as a virtual event over the weekend of September 26 and 27. All participants receive a long sleeve quarter zip top, finishers medal and race bib in the post.