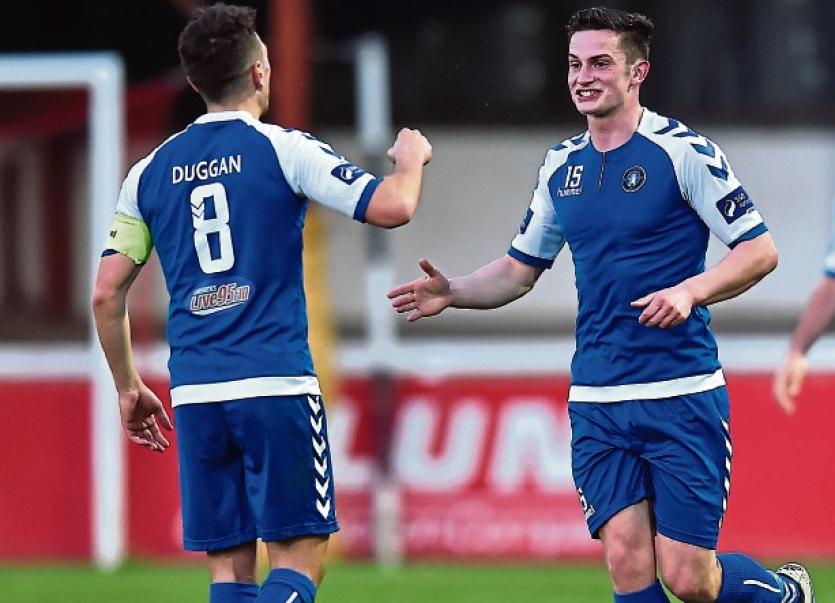 Tony Whitehead, right, is congratulated by Shane Duggan after scoring for Limerick FC in the SSE Airtricity League Premier Division against St Pat's in 2017. Whitehead has joined Bury AFC

Whitehead made 181 appearances for Limerick over six and a half seasons, becoming an integral part of the club's senior squad.

The 25-year-old swaps life last season at Stalybridge Celtic, in the Northern Premier League for Bury AFC, who will compete in Division 1 North of the North-West Counties League.

Whitehead got his first taste of senior football in a summer friendly against Premier League champions Manchester City at Thomond Park in August 2012 and began to be included in Stuart Taylor's matchday squads in August 2013.

The defender made his competitive debut away to Bray Wanderers in a league fixture on 13 October, 2013 before featuring regularly for the first team in subsequent seasons.

In 2018, Whitehead left Ireland for Dunedin and signed with Southern United in the New Zealand Premiership.

Speaking about his switch to Bury AFC, Whitehead told the club's website: “I’m delighted to be here and have everything over the line. It’s a big project that I’m honoured to be a part of. The size of the club and the fan base that comes with it is something every player wants to be a part of.

"It’s now up to us to deliver on the pitch. I’m looking forward to working with Andy (manager Welsh) and the hard work starts now for all of us as a group."

Manager Andy Welsh commented: “Absolutely over the moon at getting Tony over the line. A player playing in the Northern Premier League last season with Stalybridge, his ability to break play up and control the game from centre midfield is something we will be expecting from him.