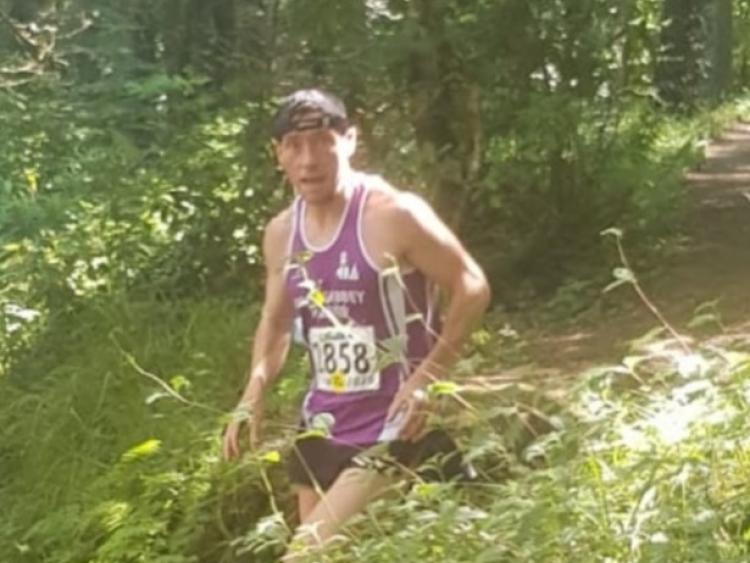 Barry Hartnett heads for home during the Ballyhoura Peaks 10k

LAST Saturday runners from all over the country from as far north as Antrim to as local as Kilfinane arrived to the foot of the mighty Seafin in Ardpatrick, Co Limerick for the Ballyhoura Peaks.

Seefin (Suí Finn) is a mountain near the southern border of County Limerick. At 528m it is the highest peak and the second most northerly summit in the Ballyhoura Mountains and the 396th highest in Ireland.

The name Suí Finn translates as the Seat of Fionn (Mac Cumhaill). It is so named because, according to tradition, Fionn mac Cumhaill and the Fianna stopped here in their travels around the country.

There was three distances to choose from all pre booked. The first race that set off at 10am was the Marathon.
The Marathon consisted of 4 laps from the trail head down to Glenosheen, up Seafin crossing the bog, back down and continuing around. Our only brave soul to take on this distance was Liam O'Donnell but unfortunately after 3 laps in the blistering heat Liam was unable to finish the Marathon route.

Our second race departed the trail head at 11am and this was the half marathon. The half marathon was following the same route as the marathon gone before them but the runners only had 2 laps to complete the route. Four of our club men and one club lady battled the heat on this circuit.

Tom Blackburn finished 5th followed by Padraig Wallace, Robert Cunningham, Martina Moloney and John Hayes.
The final race of the day was the 10km which set off at shortly after 12pm. This race was simply one time up and one time down so there was no messing around.

With the temperatures hitting their highest and with fresh legs 68 runners hammered down the most precarious section "the fox run" and swallowed up competitors from the half marathon and the marathon.

We had 7 official club members in the 10km but we are also going to lay claim to 2 others. We had a fantastic win for Barry Hartnett, 4th for Kieran Lees, 9th for Willie O'Donoghue followed quickly by Gerard Hanley, Jason Collins, Patricia Ryan and Patricia Blackburn.

We're also extending a club well done to members of the extended Ryan family, Patricia's sister Debbie and her husband Damien all the way from Galway.

Checking on the progress of the Milers on the route was club member Dariusz Gazdowicz. These races could not be ran without an organising committee (Race Directors) and volunteers (Helpers).

Club members involved in the organising committee were Lynda Hynes and Tom Blackburn. Volunteers on the day were Mairead Hynes, Shinead Blackburn and Lynda Hynes. Special homage has to be paid to 10k runners Jason Collins, Willie O'Donoghue and Patricia Blackburn.

Even though these three were not racing until noon they were on site from 7.30am. Patricia had a melody of jobs from lugging tables to signage, Willie had a 10k + done before the actual race between putting up signage, car parking, route directing runners and lugging tables and boxes while Jason Collins had the back wrenching job on his feet for nearly 4 hours of car parking.

BACK in 2017 the club applied for a grant under the sports capital programme scheme of 2017.
A few months later in 2018 we received the news that we had been successful in our application and funding to the total of €9,500 was granted to the club by the department of transport, tourism and sport.

The purpose of grant was to provide improved facilities for club members and the wider community by improving the track at the community field and providing improved lighting at the track along with other funding received by local groups.

WE are back at training on Tuesday and Thursday nights between 7 and 8 pm for adults only. Our set up has a new framework that we have to incorporate into our training schedule.

For contact tracing pre booking is essential through our online booking system for our current members.
Newbies: Always Welcome. Should you have interest in joining us at our training sessions please message us via our social media page Mooreabbey Milers AC on facebook and we will point your running shoes in the right direction.