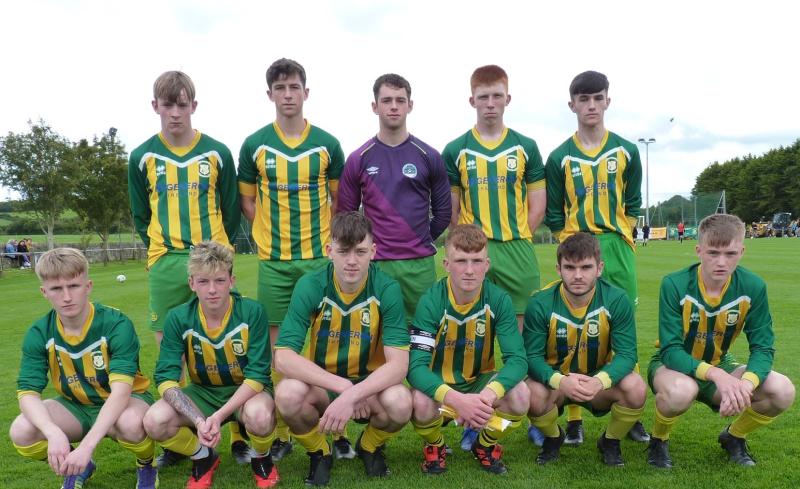 This abridged version of the famous opening sentence from Charles Dickens’ A Tale of Two Cities starkly reflects the range of emotions that pervaded Ballingarry AFC over the past week. After their momentous 1-0 victory over Bridge United last Sunday week, the club was gleefully looking forward to its first ever appearance in a Munster Youths Cup Final when the devastating news came last Saturday afternoon that James Clancy, club secretary since 1987, had suddenly passed away just as preparations were being made to honour his 60th birthday. James was a towering figure in the club, a Trojan worker and a visionary. He will be sadly missed but his legacy will live on for generations to come.

In life, James was calm and focused and his wish now would be for the Youths team to focus on their Munster Final against Villa FC on today, Saturday at 3 pm in Ozier Park, Waterford.

It won’t be easy for the management team to focus fully on the big game as the manager is Dean Clancy, nephew of James, and the assistant manager is Dean’s father, John, brother of James and another club legend.

However, Dean and John will carry on and they will do their best to ensure that the young players in their charge will be as well-prepared as possible in their quest to achieve Munster glory. Coaches Mike Boyle and Shane Markham will also play their part.

Ballingarry’s journey to the Final has been long and memorable. At local level, they kicked off with a 3-1 victory away to Granagh United on the 27th of September and followed up with a headline-grabbing 4-1 win at home to last season’s semi-finalists, Broadford United. A 2-0 victory away to St. Ita’s earned passage into the last 16 open draw.

That produced a long trip to Ballinroad in Waterford but the journey home seemed shorter after a 2-1 victory. It was in the quarter-final away to highly-rated Carrigaline United that belief grew exponentially that Ballingarry’s name might be on the Cup. They were 2-0 down but staged a heroic comeback to lead 3-2 with goals from Kieran Storin, Josh Quill and an own goal before the home team earned extra-time with a last-gasp equaliser. Ballingarry were not to be denied and won 4-2 in the penalty shoot-out.

Those five victories led to the home semi-final against Bridge United. Mike Molloy opened the scoring with a superb 30-yard lob in the 4th minute and that proved to be the winner. The Clancys made no changes during the game, which suggests that, barring injuries, they will start with the same eleven against Villa. That would mean a back four of TJ Tierney, skipper Ciaran Tagney, Kieran Storin and Reece Kelly shielding goalkeeper Jack Molloy.

The midfield is expected to comprise of Darragh Casey and Josh Quille in the middle, flanked by Adam Hickey and Lee Madigan. Semi-final hero Molloy and David Geary will likely again be entrusted with the striker roles.

Like Ballingarry, Villa have won 6 games to get to the Final. In the Waterford League rounds, they won 7-1 at home to Portlaw, 4-2 away to Tramore and 7-0 at home to Waterford Crystal.

They continued their free-scoring form in the open rounds, with a 5-0 victory at home to Douglas Hall and a 4-1 defeat of visitors Cullen Lattin. Having skated through five games, it was put up to them in the semi-final but they showed they were able to win tight games with a 2-1 victory at home to College Corinthians.

Villa are managed by Conor Coad, who played for Waterford United in the League of Ireland and has managed the Waterford Academy. This is his second season managing the Youths team and his second season to reach the Munster Youths Cup Final. Last season, they were beaten in the Final by Carrigaline Unted, thus failing to add to their previous triumph in 1959 when they beat Glasheen in the final.

A few of the players who suffered disappointment at the final hurdle last season will be involved again on Saturday and that experience will stand them in good stead. The managerial experience of Coad is also a positive factor. Playing in their League ground is another advantage for Villa. Having said that, last season’s Final was also in Ozier Park and that wasn’t enough to see them over the line on that occasion.

We have now reached the part of the preview at which I am supposed to make a prediction. On this occasion, for the first time ever, I will not do so. In light of the special circumstances surrounding the game, I will dispense with any attempt at objective analysis and simply extend sincere best wishes to Ballingarry in their quest to become the first Limerick Desmond League team to win the Munster Youths Cup.

I began this preview by quoting Charles Dickens. I will finish by quoting James Clancy. Having reported on countless games for his beloved Ballingarry down through the years, these are the final lines that he wrote in his final match report, the semi-final victory over Bridge United:

“The final beckons for Ballingarry. Has there ever been a bigger sporting occasion for a club from The Garden Town? For 36 years the club has been waiting for a day like this. It has finally arrived.

Come on You Boys in Green and Gold. (COYBIG&G)”

James Clancy was a founder member of Ballingarry AFC in 1984. It is an interesting coincidence that 1984 was also the only other year in which a Limerick Desmond League team reached the Munster Youths Cup Final. The team was Glin Rovers and they were beaten in extra-time by Vereker Clements. The Glin panel that day was: Darren Mulvihill, Jude O’Sullivan, Pat McMahon, Michael Adams, Shane Fitzgerald, Kieran Culhane, Philip Danaher, John McNamara, Brendan McKeogh, Mike McLoughlin, Leo Roche, Kevin Healy, Michael Fennell.

The Limerick Desmond League Management Committee offers its sincere condolences to the Clancy family and to Ballingarry AFC on the sudden death of James last Saturday. James’ record-keeping for Ballingarry was legendary, amassing stats on every player who lined out for the club since its foundation. His attention to detail was seen on a wider front when he served a spell as Limerick Desmond League PRO in the 1980s. He was a frequent attendee for his club at League AGMs and Delegate Meetings, at which his was always a voice of reason and calm, even in a heated debate. James had so much more to offer but his legacy is already assured. May he rest in peace.

The Limerick Desmond League will hold its AGM and Delegate Meeting on the one night, Tuesday 1st of September at 8 pm in Longcourt, Newcastle West. Because of Covid restrictions, only one delegate per club will be allowed.