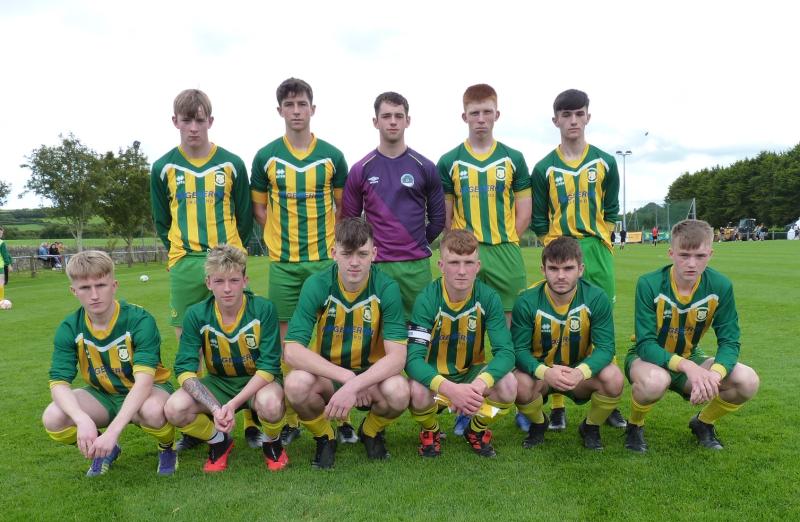 BALLINGARRY AFC will travel to Waterford later this month for their Munster Youths Cup final showdown with Villa FC.

The game will be played in Ozier Park, Waterford on Saturday, August 15 at 3pm.

A glorious summer’s day at The Paddocks brought a glorious result for Ballingarry AFC as the Green and Gold’s Munster Youths Cup dream lives on after a 1-0 victory in the semi-final at home to Bridge United on Sunday.

It was the Limerick Desmond League’s very own Super Sunday, with three clubs involved in colossal Munster collisions, but it was Ballingarry alone who emerged victorious.

What an occasion it promises to be when they face Villa FC of Waterford in the Final on Saturday, August 15, with the opportunity to become the first team from the League to win the Munster Youths Cup.

It really was a fine game of football between two very evenly-matched sides last Sunday afternoon and, while the scoreline correctly suggests a tight-fought game, Ballingarry were deserving winners as they forged the better chances with trojan performances in all departments.

The only goal of the game was scored inside the opening five minutes. Bridge could have went ahead when Leon Daly, the smallest but also one on the best players on show, with brilliant trickery beat TJ Tierney on the wing to cross to Conor Maxwell whose header forced a fine save from Jack Molloy.

Quick thinking from Molloy put Reece Kelly away down the left and he found Mike Molloy thirty five yards out form goal. Spotting the keeper off his line, Molloy sent a truly magnificent effort sailing over the stranded Will Fitzpatrick's head for a wonder goal. The game evolved from here and a real battle resulted.

Twelve minutes in, United had an opportunity when Kieran Tagney, who was a Herculean captain throughout, fouled Scott Kirkland, but the free from Maxwell was well wide.

A glorious chance fell to Bridge after fifteen minutes when Tharbsio Dube’s neat cross from the right found Evan O'Callaghan unmarked sixteen yards out but he volleyed just over. It was a lucky escape for Ballingarry.

Ballingarry had forced a number of early corners before the visitors got their first on 22 minutes, but it proved an easy save for goalkeeper Molloy, who, it must be said, had an untroubled game throughout, although there was one scary moment in the final minute of the game when he tried to find David Geary with a quick clearance only for the ball to strike his own player and rebound back into the box. Molloy recovered well and it was a lesson learned no doubt.

This was another tremendous performance from this Ballingarry side, following on from the heroics away to Carrigaline United in the quarter final.

They were well-drilled and well-prepared and had the required self-belief. Credit must go to the management team of Dean and John Clancy for their professional approach, as well as Shane Markhan and Mike Boyle for the help they have given over past few weeks.