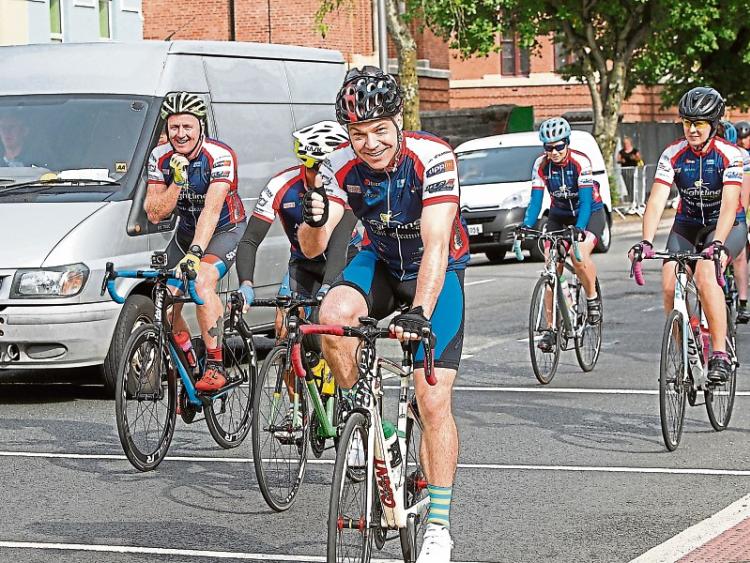 THE Tour de Munster, which has raised huge sums of money for charity over the last 20 years, is back on Shannonside this Thursday.

Cyclists will stop off in Limerick as part of the epic 640km four-day charity cycle which is carried out in aid of the Munster branches of Down Syndrome Ireland, including Down Syndrome Limerick.

Cyclists will get into the saddle on Thursday, and will take in Waterford and Tipperary, before landing in Limerick that evening.

To mark the 20th anniversary, cyclists will stop at King John’s Castle, with legendary cyclist Sean Kelly taking part and joining riders in the castle.

Ellen Tuffy, chairperson of Down Syndrome Limerick said, “The Tour de Munster is a fantastic event and a very important fundraiser for us. Over 100 cyclists will travel 640km across the six counties of Munster over four days. Many of the cyclists involved have done this event for years and we consider them friends.  We really appreciate their commitment to our charity and the help and support that they provide.  The funds raised will go towards providing therapies to our children and adults with Down syndrome but will also help fund the PPE and Covid safety measures that are required going forward”.

Daire Heffernan, the general manager of King John’s Castle added: “We are delighted to welcome the cyclists involved in the Tour de Munster charity cycle to King John’s Castle and to the banks of the River Shannon. We have a fantastic venue here which epitomises the beauty and strength that Limerick has to offer, while also allowing participants to receive a safe and socially distant welcome. We are thrilled to be supporting a local and very worthy charity like Down Syndrome Limerick. We recognise the fantastic work that the charity does with children and adults with Down syndrome, so it is great to be able to welcome the Tour to Limerick on August 6.”

Donate to support the Tour de Munster riders at www.idonate.ie/tourdemunsterlimerick.