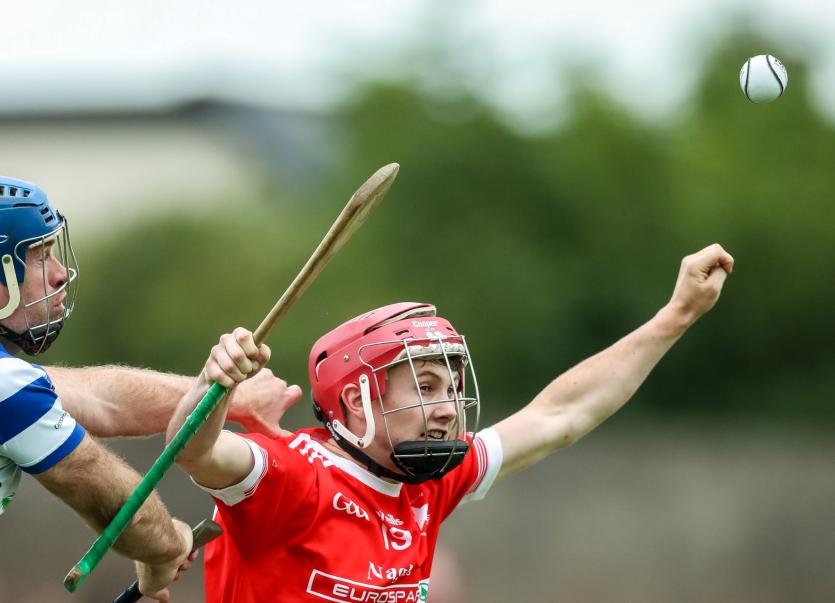 Bruff's Bradley McNamara attempts to win this possession during the win over Dromin-Athlacca. PIC Keith Wiseman

BRUFF have one foot in the knockout stages of the Lyons of Limerick Premier IHC after a 2-18 to 1-16 victory over Dromin-Athlacca.

The men in red had a goal in either half from Paul O'Riordan and Bradley McNamara to help them build on last weekend's win over Knockainey.

It's back-to-back defeats for Dromin-Athlacca who must now get a positive result against Knockainey in their final group games next weekend.

The sides were level on seven occasions in the opening half in Kilmallock but Bruff brought a 1-10 to 0-7 lead into the interval after a strong finish to the in half.

The game was 0-7 each on 22-minutes but Dromin-Athlacca failed to score again before the break with four key scores for the men in red.

David Breen, Jason Lenihan and David Reidy each had two points from play in the first half for Dromin-Athlacca.

Danny O'Leary frees and points from play by Sean Finn, Kevin Bonar and Chris Browne were among the Bruff tally.

Then came the late Bruff flourish with the all-important goal in injury time from Paul O'Riordan for a six point lead.

David Reidy was to hit eight second half points for Dromin-Athlacca to bring his tally to 0-10 (6frees) but the goal they needed came too late.

Bruff free-taker Danny O'Leary ended with 0-8 and kept the scoreboard ticking over for his side with Paul Browne also on the mark.

Ten minutes from the end came the second Bruff goal - Bradley McNamara finding the net for a 2-15 to 0-13 lead.

Back came Dromin-Athlacca with Reidy points. Their goal came deep inside the final five minutes when David Breen raised a green flag - he scored two in the defeat to Glenroe a week previous.

But O'Riordan and O'Leary had the final two points to ensure a five point winning margin for the John Mulqueen managed Bruff.