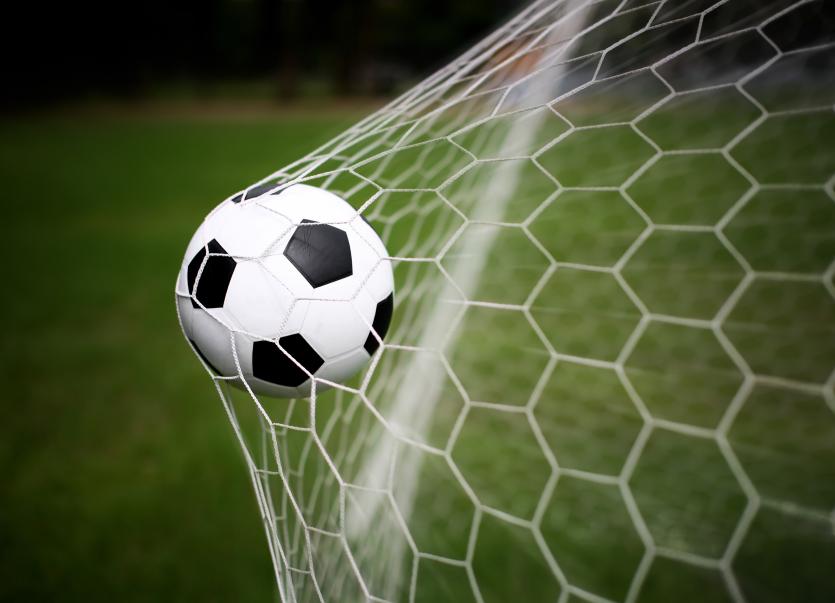 AFTER waiting five months for a game of any sort involving Limerick Desmond League teams, three big games will be played at the same 2pm kickoff time next Sunday.

Sharing the provincial limelight with Rathkeale, who face Killarney Celtic in the Munster Champions Trophy final in Tralee, are Abbeyfeale United, who host holders St. Michael’s in the Munster Junior Cup quarter-final, and Ballingarry, who have home advantage against Bridge United in the Munster Youths Cup semi-final.

BALLINGARRY have certainly earned their place in the Munster Youths Cup semi-final, winning five games en route. At local level, they kicked off with a 3-1 victory away to Granagh United and followed up with a headline-grabbing 4-1 win at home to last season’s semi-finalists, Broadford United.

A 2-0 victory away to St. Ita’s earned passage into the last 16 open draw. That produced a long trip to Ballinroad in Waterford but the journey home seemed shorter after a 2-1 victory. Ballingarry were 2-0 down in the quarter-final away to highly-rated Carrigaline United but staged a heroic comeback to lead 3-2 with goals from Kieran Storin, Josh Quill and an own goal before the home team earned extra-time with a last-gasp equaliser.

Ballingarry were not to be denied and won 4-2 in the penalty shoot-out.

The father and son management team of John and Dean Clancy must have been proud of the resolve shown by their charges in Carrigaline and they will need to show similar steel on Sunday against a highly-rated Bridge United side.

Centre-back Ciaran Tagney, central midfielders Darragh Casey and Josh Quille and strikers Mike Molloy and David Geary will need to maintain the high level of performances they have shown all season and that will have to be matched by all those around them.

Michael Southgate misses out with an ankle injury and he will be a loss.

The Clancys have prepared the side well, interspersing quality training sessions with high-tempo friendlies against Broadford United and Ballingarry junior teams as well as two Youths teams from the city, Aisling Annacotty and Fairview Rangers.

Bridge United reached the last four with convincing victories in Clare against Newmarket Celtic and Ennis Town, a 5-3 win away to Caherdavin and a penalty shoot-out victory at home to Charleville.

It is 30 years since Bridge have won the Youths League in Clare but they will bridge that gap this season if they win their final league game as they a point in front at the moment. Further proof that the current squad are a special lot came at the weekend when they won 4-2 away to St. Mary’s in the quarter-finals of the FAI Youths Cup and they can now look forward to a home semi against Douglas Hall.

Ballingarry have reached the semi-final once previously, in 2002. On that occasion, they were beaten 3-0 by Douglas Hall. They will be hoping to go one better on this occasion and, with home advantage and the good mood in the camp, I think they might just do it.

THESE two sides are no strangers to each other. Abbeyfeale United recorded a famous extra-time victory against St. Michael’s in the Munster League Champions Trophy Final in Newcastle West in December 2016 but St. Michael’s came out on top last season when they won at home to the Fealesiders in the Munster Junior Cup.

Such a feat is unlikely to be ever repeated and it certainly won’t happen this season as the FAI Junior Cup and Munster League Champions Trophy are both out of the equation. That will make St. Michael’s all the more determined to win the prizes remaining to them.

They are looking good in the league as they have a 100 percent record after nine games. The Abbeyfeale players are familiar with St. Michael’s’ main men, such as right-back Chris Higigins, centre-half Paul Breen, wide midfielder Jimmy Carr, central midfielder Colin Barbery and striker David Slattery.

Another player of interest will be Gavin Dillon, who transferred to St. Michael’s from Abbeyfeale during the summer, having impressed in the Munster Junior Cup meeting last season.

Abbeyfeale’s last competitive game, on the 16th of February, was in the 5th round of this competition, a 5-0 victory at home to Wilton United from Cork. Prior to that, Abbeyfeale United had won 2-1 at home to Carrigaline United thanks to Cormac Roche’s penalty with the last kick of the game.

Abbeyfeale began training for this game as soon as the Covid rules allowed. The challenge game window was much shorter but they did get in two matches against quality opposition in Killarney Celtic and Pike Rovers.

Shane Mulvihill is out because of injury, while Thomas Sexton, who was Man of the Match in the Munster League Champions Trophy Final, is also unavailable. However, the rest of the 21-man squad are all raring to go.

Managers John Kelliher and Thomas Cahill have a choice of two top-class goalkeepers in Peter Collins and Shane O’Connell. Cormac Roche will be a key player in defence whether he plays at right-back or centre-half.

Chris Smith was out of action for a long time with injury but he is fit again and play a vital role wherever he is selected.

The pace of Kevin Murphy will be key to unlocking the experienced St. Michael’s defence, while the footballing intelligence of Barry Sheehy may be utilised at number ten.

There is optimism in the Abbeyfeale camp because of the quality of their squad and the way preparations have gone. There is every chance that, like the hairdressers programme in April, it will be a case of Abbeyfealegood on Sunday afternoon.

However, with three competitive games under their belt post-Covid shutdown and another league game this Wednesday night, St. Michael’s might have an edge in match sharpness and that could be a factor in keeping them on track to retain their trophy.