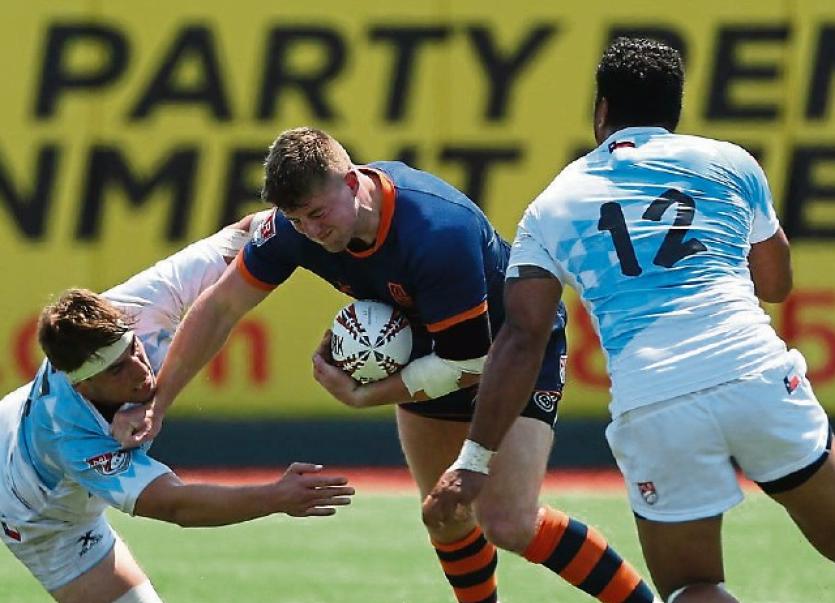 Will Leonard in action for Rugby United New York

However, the talented Leonard's second season playing rugby in the Big Apple was cut short in March by the Coronavirus pandemic.

Where was Rugby United New York's season at when the pandemic started?

Will Leonard: “We were preparing for our sixth game against Seattle at home.
It was meant to take place on Paddy's weekend, so everyone was really looking forward to it.

“The pandemic was just starting in the US and Seattle was a bit of a hot spot at the time, so the senior players and management had a meeting with regards to playing the game and they decided for the safety of fans, players and their extended families that it was best to cancel the game.

“A week later the virus had spread throughout the whole country like wildfire.

“The league decided to postpone fixtures for a month. It was frustrating, but it was necessary. We were going well. We did lose our first game, but we found our form and won the next three games.

“We were mid-table in the Eastern Conference and were starting to get a nit of momentum. It was unfortunate the way it all worked out.”

How bad did it get in New York in terms of lockdown, having to stay at home?

WL: “After that scheduled first game in New York was called off, there was a full lockdown implemented. It was the same as everywhere, stay home as much as possible, only go for essentials, pharmacy and shopping. It was strange alright.”

What was it like living in such a busy, bustling city as New York when all of a sudden it grinds to a halt?

WL: “It was surreal. Even on St Patrick's Day, traditionally one of the biggest days in New York, it was just completely quiet, no movement whatsoever.

“I was actually driving through Manhattan one of the days during lockdown and there was absolutely no one around, restaurants, bars, all boarded up.

“Businesses were closed, not many people moving around, no cars on the street, it was madness, like the end of the world or something like that.”

How did it impact on you in terms of training? Were you able to train at home?

WL: “All team squad training was postponed pretty much immediately and we had no access to our team gym, or field.

“Even individually we weren't able to borrow dumbbells or weights or anything like that. We had the bare minimum at home.

“There was myself, Mark O'Keffee, Alex McDonald and his girlfriend. We went for runs and stuff. It wasn't ideal, but we made do with the situation we found ourselves in.”

How did you feel with the rising number of Covid-19 cases in New York and the US as a whole?

WL: “At the time, it was pretty worrying. You are stuck inside all day and you don't really have much to do besides watch what is on the news and watch what people are saying about the virus and there was a certain amount of scaremongering going on from some people in the media, just on twitter, stuff like that.

“I suppose people are always making the situation out to be a lot worse than what it was. Initially I was pretty worried about the direction the cases were going in the US and New York.”

Did you know of anyone who contracted Covid-19?

WL: “There were a couple of lads on the team in New York who contracted Covid-19.
“For someone of a young age and relatively fit and healthy, I don't think it is too big of an issue, so I think they had symptoms for a couple of days and they were pretty much back to normal then.”

Did you decide to come back to Ireland or to stay put?

WL: “Initially, I had decided to stay in New York. I was actually helping out the rugby team's office with administration work, so I was kinda hoping I would be able to tip away at that and help out with that kind of stuff.

“But then as the cases kept going up and it seemed less and less likely that New York would be out of lockdown any time soon, the lads started going home and making plans.

“I wanted to stay in New York, but I suppose it was probably best to head back to Ireland. It seemed as if they had it more under control.”

How is your training progressing at present?

WL: “Our S&C Ian Jones, he is actually a Cork lad, is head of S&C at Wagner College in New York.

“He has been fantastic, sending our programmes and just keeping us going, keeping us updated.

"It has been pretty much individual training since I have been back home in Ireland, so hopefully when I get back over, we'll get back into some group training and small group training.”

When will Major League Rugby restart?

WL: “The Major League Rugby season 2020 was actually cancelled. They initially postponed it for about a month and then a couple of weeks later they kinda realised the severity of the situation and so they cancelled the season completely.

“The next season starts early 2021 which is a bit of a long time away, but there are plenty of things to keep me occupied until then.”

What are your plans for the short to medium term in terms of playing rugby?

WL: “Originally, I was supposed to be preparing to go to New Zealand to play rugby over there, but obviously things got out of hand and they closed their borders, so that plan went out the window.

“Now I am heading back over to New York in August to start the club season with Old Blue, so that season will run from August until late November and then we are straight into pre-season season training with Rugby United New York on November 23 until the week before Christmas.

“Then it's back home for a couple of weeks and straight back into pre-season in the New Year, running up to the first game in February 2021.