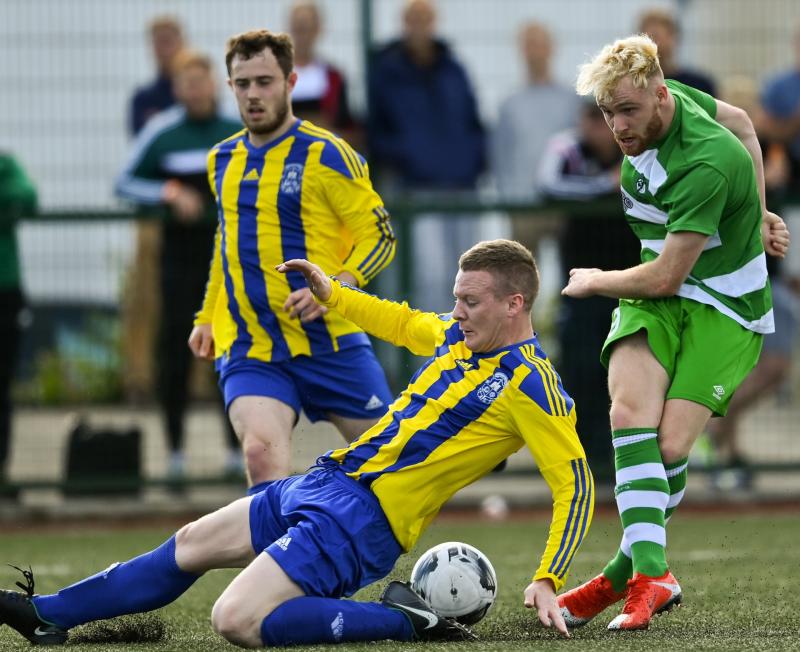 Mark Slattery, of Fairview Rangers, blocks a shot on goal from Stephen McCarthy of Killarney Celtic

FAIRVIEW Rangers set up a home semi-final date with Athenry, of Galway, next month are edging past Killarney Celtic on penalties in their dramatic FAI Junior Cup quarter-final played in Killarney on Saturday evening.

After a scoreless 120 minutes, it was the Limerick side who emerged victorious in the penalty shoot-out 4-2, with Jeffrey Judge, Clyde O'Connell, Robbie Kelliher and Steven Bradley netting for the Fairgreen side, while 'View 'keeper Aaron Savage saved two of the Kerry side's spot kicks.

This contest, played out before a restricted attendance of less than 200 including players and officials due to Covid-19, never reached any great heights.

Played in brilliant conditions on Celtic's astroturf facility, both outfits had their homework done on each other.

Late in the first half, Fairview's James Fitzgerald went close as his effort from the byline skimmed the upright.

On the hour mark, the 'View's Ross Mann hit a cracking shot that Kelliher in the home goal saved impressively

In the final minutes of the 90, from two free kicks the 'View through AJ O'Connor and Stephen Bradley almost broke the deadlock, only for last ditch saves to keep it scoreless.

In extra time, the home side almost broke through as Cian O'Brien got free in the penalty area and his cushioned shot seemed destined for the bottom left hand corner, but a scintillating save from
Arron Savage kept his goal in tact

Moments later, Fairview were reduced to 10 players as AJ O'Connor picked up a second yellow card.

Fairview were now forced to defend manfully as Killarney pushed for the winner. However, the Limerick side remained resolute in defence to send the tie to penalties.

Fairview's prize for winning the shoot-out is a home semi-final date with Athenry in the Fairgreen on Sunday August 23.