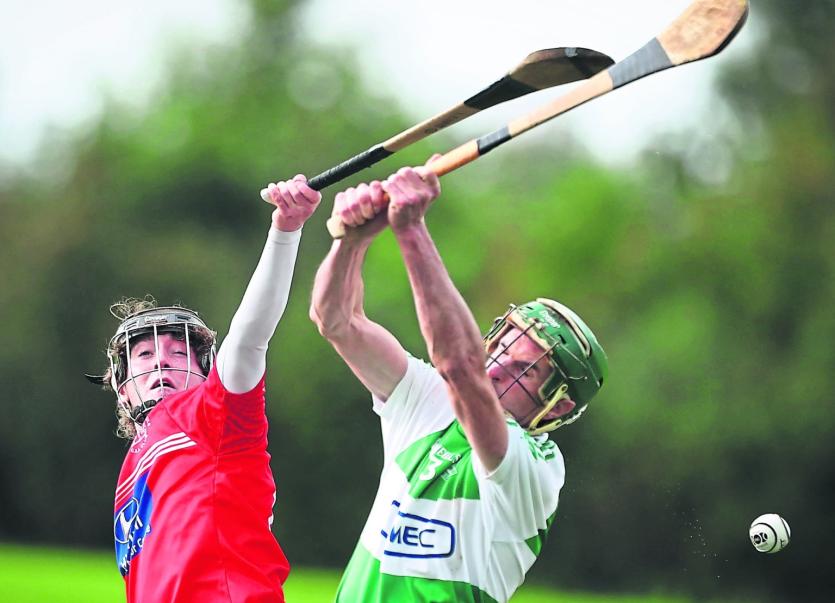 Mungret's Paul O'Brien, left, pictured playing against Effin, top scored for his side in their dramatic Premier IHC win over Kildimo-Pallaskenry on Friday night

The sides looked all set to play out an exciting draw, tied at 1-16 each, as the clock ticked into stoppage time.

However, in a game in which the teams were level no fewer than 10 times over an exciting hour's hurling the opportunist Duff popped up with the match winning score on a 1-17 to 1-16 scoreline.

The attendance inside the venue may have been limited to 200, including players, team managements and match officials because of Covid-19 restrictions, but it didn't deter some die-hard supporters taking up positions outside the perimeter boundary of the match venue to catch a glimpse of the action.

After the sides had been tied 0-7 each after 25 minutes, Kildimo-Pallaskenry looked to have gained an edge in the first round contest with a run of points from Liam Griffin, two, one a free, and Cathal Downes to ease into a three point lead, 0-10 to 0-7.

Some Vantage Point! Some supporters were just not going to miss seeing the Limerick Premier IHC game in Clarina tonight!! @Limerick_Leader #LLSport pic.twitter.com/8OFFtqZYFK

To their credit, Mungret St Paul's rallied, notching three points without reply from Eoin O'Doherty, top scorer Paul O'Brien, with a pointed free, and a smashing effort from Niall Mulcahy from close to the sideline.

Despite that run of scores, it was last year's beaten county finalists in the grade Kildimo-Pallaskenry who had their noses in front at the break, 0-11 to 0-10, thanks to a fine individual score from their Limerick senior star Kyle Hayes.

Mungret managed the opening four scores of the second half, all pointed frees from sharpshooter O'Brien to edge into a three point lead, 0-14 to 0-11.

The complexion of the game changed once again in the 38th minute, however, when Kildimo-Pallaskenry corner forward Darren O'Connell struck for a smashing individual goal.

The goal lifted his side and three unanswered points, including two from Kyle Hayes, had Kildimo-Pallaskenry 1-14 to 0-14 to the good after 44 minutes.

Scores on the board full-time in Clarina. Last minute win for @mungretgaa over @KenrydimoGAA pic.twitter.com/I7Ogv8nO7Y

However, the see-saw nature of the scoring continued a minute later when a sideline cut from Paul O'Brien from close to 40 metres out ended up in the net to tie the scores at 1-14 each.

The teams managed two further points each, with Liam Harrington and O'Brien, from a '65, raising white flags for the winners. Kildimo-Pallaskenry replied with Hayes' adding his sixth point of the game from play and an equalising score from a Shaun Barry free.

However, Duff had the final say with his dramatic winning score late on.