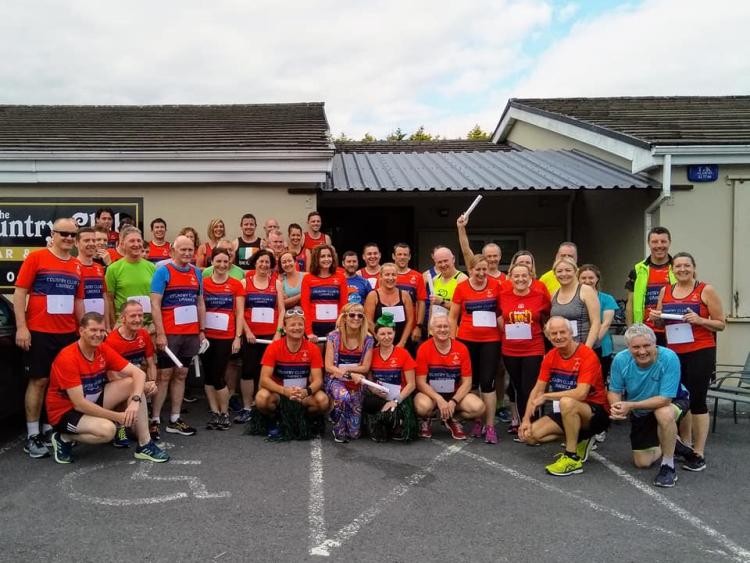 Limerick Country Club AC members at a previous mid-summer relay event. The club has gone from strength to strength

LIMERICK Country Club AC started about 1980 as the original running boom was kicking off.

A group from Limerick AC met at Redgate Road, near LIT, for training. The group included Neil Cusack, Paul O’Connor and the driving force was Paddy O’Connell.

In the early 80s due to traffic concerns, it moved further down Old Cratloe Road to the Country Club pub, where roads were less busy. It then became the Country Club AC, a separate entity from Limerick AC.

In the early 1990’s Johnny Collins took over as commander-in-chief organising training. The Meelick Loop came into its own at that stage, with the tough 1-mile hill requiring gruelling legwork as runners ran up the seemingly never-ending, gradient.

In the late 1990s Mike Sheehan and Peter Hogan took over and established a formal committee.
Our New Year’s Day run is well-established in the running calendar and with a wide variety of competitors.

These include local club runners, those home for Christmas in need of a race after indulging plus non affiliated runners who just enjoy running.

Some use it to kick start new year’s resolutions, others purely enjoy the social aspect. But some take it seriously with pre-run conversations peppered with talk of PBs/SB and competition being eyed up!

Others will be bleary-eyed from previous nights celebrations and just hope to finish without first aid! It’s also a fundraiser for nominated charities which have included the Neonatal Unit and Milford Hospice.

Last summer the Country Club had a mid-Summer relay for members. Each team had 3 athletes assigned so each had a balance of abilities.

It was supposed to be an annual event but Covid-19 thwarted that this year. Fingers crossed for next year! Non running events include an annual outing somewhere scenic for a hike.

An Easter Egg Hunt was a tradition but has lapsed lately. The Christmas Party is always exuberant but details won’t be divulged!

During November, deceased club members are remembered and a Mass or Prayer Service is held in the Country Club on a Saturday morning post training.

This wonderful tradition gives some peace to friends and relations of those passed on- gone but not forgotten.

There’s currently 4 weekly training sessions. The Country Club Pub is the meeting point Tuesday to Thursday in Summer, moving to The Strand Hotel in Winter, for daylight reasons.

Saturday morning is from the Country Club. Tuesday and Thursday are 5k-8k doubling as “Couch to 5k” when C25K is held. Wednesday is 10k+ and often a faster pace.

Saturday has 5k/8k loop options or extra for those on longer runs. ‘Clubbers’ also organise ad-hoc sessions via WhatsApp.

Some walk on Saturdays if running isn’t possible for whatever reason. Saturdays finish with a cuppa and chat open to all.

Thus all catch up, regardless of pace or distance and feel part of the ‘family’.

We also have members who were outstanding athletes and no longer run but do impart their vast knowledge over the Saturday morning cuppa with newer (dare I say younger!) runners.

Although one of Limerick's smaller clubs numbers are rising. Many joined through “Couch25k” , others were introduced found us via social media.

One thing all new members have in common is delight at the friendly welcome and the club’s family feel.

Although not very big, the sense of friendship and camaraderie amongst members makes it feel like a family.

Members are there for each other for good days, like PBs/birthdays, and bad, like injuries or bereavements. Thirty-seven Country Clubbers ran or walked 4 miles to mark Curleys third anniversary this year.

These were done alone within a 2km limit due to the Lockdown but that didn’t deter a large proportion of Clubbers from showing their support.

That’s why we like to say that we’re more than just a running club!