Limerick racing enthusiasts in red hot form on the track 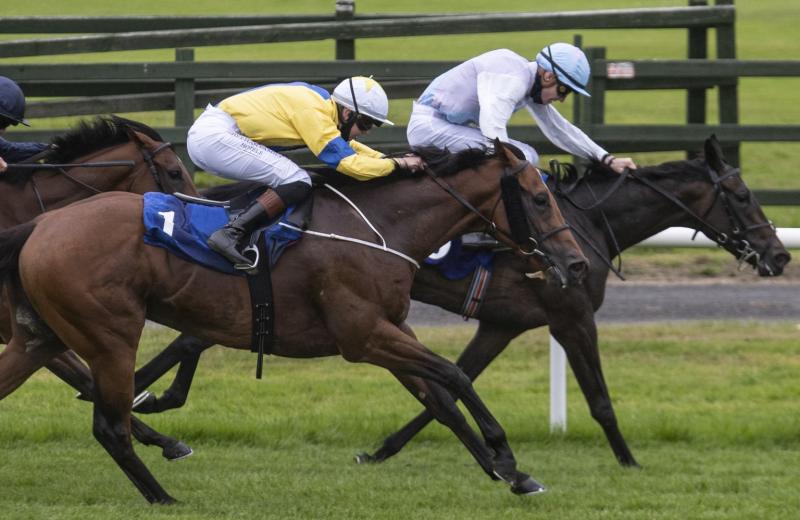 Star Of Cashel, yellow and blue, gets up late on under Abbeyfeale jockey Paddy Harnett to win the eight furlong handicap at Killarney Picture: Patrick McCann/Racing Post

BREAD And Butter added to his success at Tipperary at the beginning of the month when winning the 2m4f handicap hurdle at Roscommon on Monday last for Rathkeale conditional rider Conor McNamara and trainer Gavin Cromwell.

McNamara was on board at Tipperary and again did the steering as the 7/2 chance, owned by the Show Ponies Syndicate, scored by two and three-parts of a length from Chasing Abbey. It was his third winner of the season.

Bruree-based trainer Enda Bolger added to the previous week’s gains at Killarney when the Mark Walsh-ridden Stamp Your Feet won the 2m handicap chase. Formerly trained by Tom George, the eight-year-old was having his first start for Bolger and scored by a length and a quarter from Roachdale House.

It was the first winner in the colours of JP McManus since the owner’s retained jockey Barry Geraghty announced his retirement two days previously.

Abbeyfeale jockey Paddy Harnett was one of two apprentices to land a winner on their first ride for trainer Fozzy Stack at Killarney on Monday.

Tipperary’s Joey Sheridan landed the opener on Bubbles On Ice half an hour before talented West Limerick horseman Harnett completed a quick double for the trainer when arriving from well off the pace to win the 8f handicap on Star Of Cashel. The 7/1 chance was Harnett’s second winner of the season.

The father and son team of Charles and Philip Byrnes won the second division of the 1m 4f maiden at Killarney on Wednesday with the Top Of The Hill Syndicate-owned Run For Oscar.

With Jessica Harrington’s Supasundae injured and an absentee, he was sent off as the 1/3 favourite but looked in a spot of bother when trapped behind a wall of horse over a furlong from home. However, amateur rider Philip cleverly found a gap on the rail and the smart five-year-old quickened up well to beat Rocket Lad by four lengths.

Ballingarry-based winning trainer Charles Byrnes said, “He fell into the soft division, that’s the way it goes and if you get the chances, you have to take them. He was caught a bit flat-footed but got up and that was the main thing, Philip is used to that from the pony racing and this was his first ride around here. We’ll see what mark he gets now but the handicapper can’t be too hard on him.”

Ballingarry jockey Billy Lee and trainer Paddy Twomey shared a winner at Leopardstown on Thursday night Ebeko made all the running to land the 7f two-year-old race. The 16/5 shot got the better of the Joseph O'Brien-trained 7/4 favourite State Of Rest by a length.

The pair were winners again at Limerick the following afternoon where the French import Pearls Galore landed the 7f fillies’ maiden. She justified her position at the head of the betting markets on her Irish debut, the strong 9/4 favourite winning by all of three lengths from the Michael Halford-trained Sindhia.

A winner over fences at Killarney last time, Thatbeatsbanagher followed up when taking the opening division of the 2m5f handicap hurdle at Tramore on Saturday, but only just. The six-year-old was sent off the 8/13 favourite but he had to work hard under Darragh O'Keeffe.

Enda Bolger’s charge just got home by a short head from Patrick Cronin’s Naturally Blond in the JP McManus colours. Charles Byrnes and Cathal Landers combined to take the 2m mares’ handicap hurdle with Imperial Choice. Owned by the Come Home Sober Syndicate, the 7/2 chance comfortable beat the Tom Gibney-trained Elegant Lass by two and a three-parts of a length for her breakthrough success.

Billy Lee landed a notable success at the Curragh on Saturday where he partnered the Ken Condon-trained Romanised to land the Group 2 Paddy Power Minstrel Stakes in stunning fashion. Absent since September of last year, the five-year-old looked as good as ever when easily beating the Aidan O'Brien-trained 10/11 favourite Lancaster House for trainer Ken Condon.

He showed a fine turn of foot to score by a length and three quarters at odds of 9/4 and Condon commented, “He’ll go back to Deauville now to try and win the Group 1 Jacques Le Marois again. It’s four weeks so it’s a nice bit of time between now and then for him to take this race and get something from it. Hopefully he can go there in good form and give a good account of himself.” At odds of 66/1, Laws Of Indices completed the high-profile brace in the GAIN Railway Stakes.

Bred by Horse Racing Ireland chairman Nicky Hartery and racing in the colours of Charlotte Holmes, he added to a Navan maiden success when battling well under Chris Hayes to see off the Jessica Harrington-trained Lucky Vega by half a length. Connections will now run their game winner in the Phoenix Stakes and the Goffs Vincent O’Brien National Stakes on Longines Irish Champions Weekend.

Shanagolden jockey Chris Hayes and the in-form Billy Lee were back among the winners at the Curragh on Sunday. Lee was first off on the score sheet as he won the 7f fillies’ handicap on top-weight Sonaiyla.

Trained by Paddy Twomey, the Ennistown Stud-owned 11/2 chance won by a head from the Joseph O'Brien-trained Music To My Ears and will be stepping up into Group company in time. Hayes dominated the remainder of the session with three winners at combined odds of 2,587/1. He landed a second Group 2 on an outsider in less than 24 hours when partnering the Fozzy Stack-trained Aloha Star to win the Airlie Stud Stakes.

The 33/1 outsider of four runners outbattled 10/11 favourite Frenetic to win by a head in the colours of David Keoghan & Partners Partnership to add to her earlier Bellewstown win. Hayes won the final two races on the card with the Kevin Prendergast-trained 13/8 favourite Monaasib easily taking the 6f maiden and 28/1 shot Elzaamone giving Curragh trainer Niall Egan his first success in the concluding sprint handicap.

Darragh O'Keeffe was in the saddle as the 25/1 shot, owned by Ken Duggan, beat fellow outsider Railway Muice by a length and three quarters. McNamara’s son and namesake was on the mark with Mandarin Monarch at Limerick on Friday.