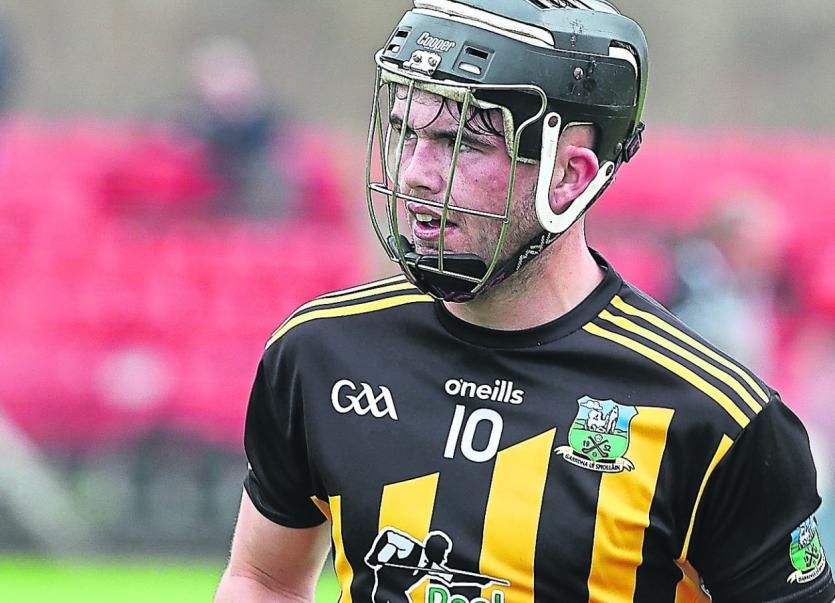 Dylan O'Shea finished with 0-18 for Garryspillane

GARRYSPILLANE won an extra time thriller to reach the semi finals of the Mint Catering Limerick U21 Premier Hurling Championship this Sunday evening.

In the LIT Gaelic Grounds it finished Garryspillane 0-30 Na Piarsaigh 2-22.

The result means the semi final draw pairs Garryspillane against Doon and Mungret against Patrickswell - both on August 12.

In this quarter final, the Bouncers looked to have won it in normal time but Na Piarsaigh found 1-1 in injury time to force extra time.

Garryspillane were then seven points clear in extra time but Na Piarsaigh again battled back but fell just short of drawing level again.

Dylan O'Shea led Garryspillane to victory with a return of 0-18 (12frees), while Calum Sheehan hit 0-5 and Eoin Sheehan 0-4.

The men in black and amber were 0-12 to 0-8 ahead at half time, after playing with a gentle breeze.

Garryspillane made the early running and were 0-4 to 0-1 ahead by the eighth minute with Peter Morrissey, Ryan Tobin and Calum Sheehan on the mark from play.

Within six minutes, Na Piarsaigh had wrestled back the lead with two points for Calvin Moran and one each for Dylan Lynch and Emmet McEvoy.

The run of four successive points for the Caherdavin men had them 0-5 to 0-4 ahead on 14-minutes.

By the time of the 16th minute water break the teams were level for the fourth time at 0-6 each.

Then The Bouncers took over - just two points coming for Na Piarsaigh in the remaining 15-minutes of action in the half.

Down the other end, Garryspillane hit six points over the same time period - two for Eoin Sheehan and further points for Dylan O'Shea and Calum Sheehan.

The lead was out to five points but a James Daly free in first half injury time left it Garryspillane 0-12, Na Piarsaigh 0-8 at half time.

It was a half where Garryspillane hit eight wides and Na Piarsaigh seven.

Within seven minutes of the restart, the game was level again - at 0-14 each.

The Na Piarsaigh revival was led by scores from James Daly and Adam McNamara - the duo sharing the six points in this period for the men in light blue.

But the city side didn't get ahead and the south Limerick men hit back and no surprise Dylan O'Shea and Eoin Sheehan were on target to regain their lead and still just 10-minutes lapsed in the new half - Garryspillane 0-14, Na Piarsaigh 0-14.

Before the water break arrived in the 16th minute of the second half, The Bouncers had hit four of six scores to lead 0-18 to 0-16.

The scores dried up after the water break with a James Daly free the only score for five minutes to reduce the lead to a single point as the stopwatch ticked well inside the final 10-minutes.

O'Shea frees and third Calum Sheehan point had Garryspillane 0-21 to 0-17 ahead in injury time.

Then came an Adam McNamara goal for Na Piarsaigh to again reduce the lead to a single point.

And there was time for more drama with Calvin Moran scoring from under the Mackey Stand to force extra time with the sides level for the sixth time - Na Piarsaigh 1-18 Garryspillane 0-21.

Garryspillane raced through the first period of extra-time to lead 0-27 to 1-19 by the interval.

Dylan O'Shea continues to blaze a trail in the LIT Gaelic Grounds with another four points and Sheehan's Calum and Eoin also added to their tally.

The only Na Piarsaigh score was a James Daly free as The Bouncers brought a five point lead into the second half of extra time.

The lead was seven points after the restart.

But Na Piarsaigh weren't finished and Emmet McEvoy crashed to the net with five minutes to play.

There was to be no more drama and Ryan Tobin sealed the Garryspillane with an injury time point.