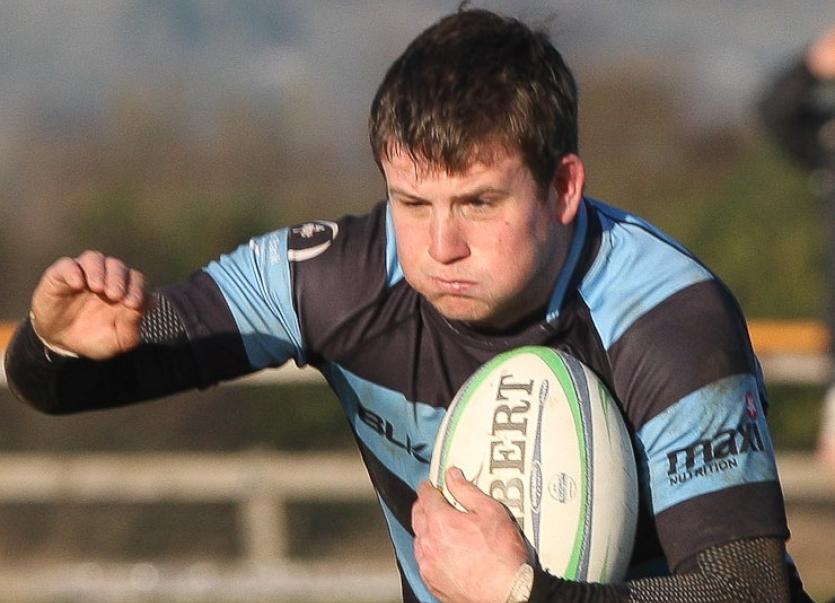 Shannon head coach Tadhg Bennett in action for 'the Parish' side

SHANNON RFC head coach Tadhg Bennett has criticised the decision not to include the opportunity for promotion from Division 1B of the Energia All-Ireland League to the top flight as part of the new-look 2020/2021 season.

The shortened AIL season for 2020/2021 is to commence in January, the IRFU confirmed last week. It will consist of a nine-game league season with semi-finals and finals in all men’s and women’s divisions.

The IRFU also indicated that 'as it is a truncated format, no promotion or relegation will take place' between the Divisions.

The 2020/2021 season will kick-off with senior clubs in the province competing in the Energia Community Series, a 'Munster Senior League-style' competition, between September and December 2020, before the reformatted Energia All-Ireland League begins in the New Year.

Shannon had been sitting in third place in Division 1B of the AIL when the 2019/2020 season was halted in March due to the Covid-19 pandemic. Shannon were relegated out of the AILs top flight at the end of the 2018/2019 season.

Tadhg Bennett said he does not see the logic behind the absence of promotion at the end of the 2020/2021 Division 1B AIL season.

Tadhg Bennett told Leader Sport: "I personally think it is all geared towards Division 1A in that if they do win that division they win an All-Ireland title. If our boys win a 1B title, they are still in that division next year.

"I don't see the logic behind it. I know it's a shortened year. I don't know if other clubs were against the idea of promotion or not but it is not something I would like if I was still playing and even managing.

"For the older lads in the squad, it's a kind of a nothing year for them in many ways. I am looking forward to the 'Munster Senior League' competition before Christmas more than the AIL I have to say.

"Shannon is a club with a massive history. It belongs in 1A. Winning a 1B title for us, when you look back on all the titles in the club already, in my opinion it is not one that is going to sit at the peak of the club's history.

"It is a big thing in terms of trying to recruit players for next season as well. The likes of Garryowen and Young Munster, their biggest selling point is the fact they are playing in 1A, Munster are more likely to be looking at 1A players. A young fella coming out of school that is what he wants to hear."

Bennett said the Shannon squad members were looking forward to pitting their wits against the likes of local Division 1A sides, Garryowen and Young Munster, as well as Cork Constitution in the Energia Community Series in the autumn.

"We only went back training on Tuesday night. To be fair we had about 50 players out there between U20s, seconds and firsts.

"We have gotten in some players, we've lost a couple. When we were recruiting there was the uncertainty over what was going to happen, I think the Munster League is very attractive to a lot of younger lads as well.

"The major plus I suppose with the new AIL structure is that we have signed a good few younger lads and we will be integrating them with the older lads. It is a year when we can do that. In relation to the gameplan, we will be able to tell lads not to be afraid to make mistakes - I tell that to them anyway - but that the repercussions (for errors) aren't as serious this year.

"When we are in it, we will want to win it, but if a young fella makes a mistake, it is not going to be the end of the world because there is no promotion or relegation at the end of the season.

"For the older lads in the squad that is very frustrating. The younger lads could have 10 or 12 years of playing AIL rugby and several shots at promotion.

"If we got well in all of the competitions in the autumn, I think we could only have one weekend off between September 12 and Christmas. You are loving the amount of games, but at the other side of it then, if you pick up a couple of knocks and injuries, you could be on the back foot with that amount of games as well.

"We want to go hard in all competitions and be involved in them all. We do have a big squad this year, so we will definitely be using it in a year when we can put the younger lads out with the older lads. Putting a couple of younger guys in with the older lads should help them get on well and thrive hopefully.

"They should be ready then for the promotion push."