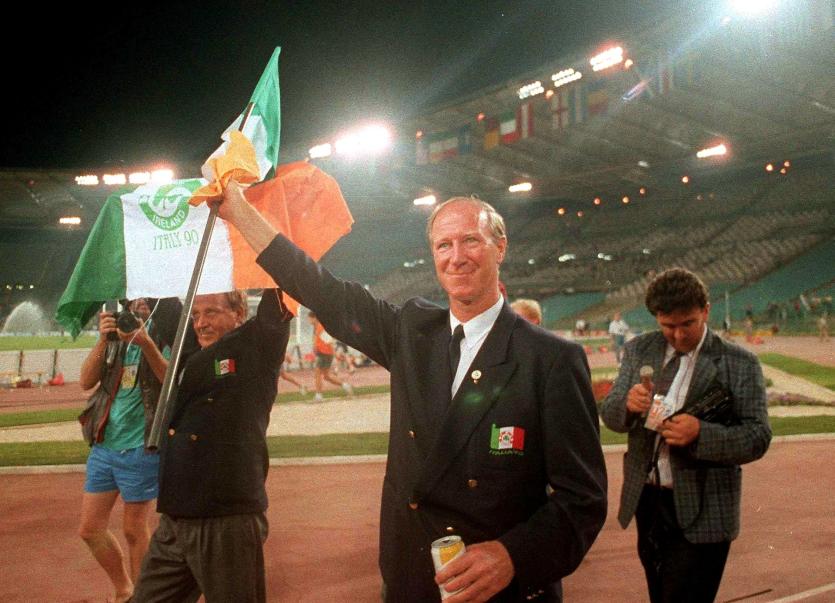 Former Rep of Ireland soccer manager, Jack Charlton, who has passed away aged 85, waves to Irish supporters after the narrow World Cup quarter-final defeat to Italy in Rome in 1990

TRIBUTES have been pouring in for former Republic of Ireland soccer manager Jack Charlton who has died aged 85.

Newcastle native Charlton, a World Cup winner with England in 1966, took over as Republic of Ireland Ireland manager in 1986.

Charlton led the Republic to unprecedented success guiding the nation to their first major finals at Euro '88 and two more in the space of 10 years, qualifying for the World Cup in Italy in 1990 and four years later in 1994.

The former Leeds and England defender who won a World Cup winner's medal in 1966 had been diagnosed with lymphoma in the last year and was also battling dementia.

A family statement read: "Jack died peacefully on Friday, July 10 at the age of 85. He was at home in Northumberland, with his family by his side.

"As well as a friend to many, he was a much-adored husband, father, grandfather and great-grandfather.

"We cannot express how proud we are of the extraordinary life he led and the pleasure he brought to so many people in different countries and from all walks of life.

"He was a thoroughly honest, kind, funny and genuine man who always had time for people.

"His loss will leave a huge hole in all our lives but we are thankful for a lifetime of happy memories."

"The best manager I was lucky to play for.The times we had on and off the pitch was priceless !my thoughts are with Pat and the family! RIP my good friend, Never Forgotten"

Former Irish defender Paul McGrath tweeted: "Father figure to me for 10 years, thanks for having faith in me. Sleep well Jack, Love ya.  Thinking of Pat, John and Peter at this sad time."