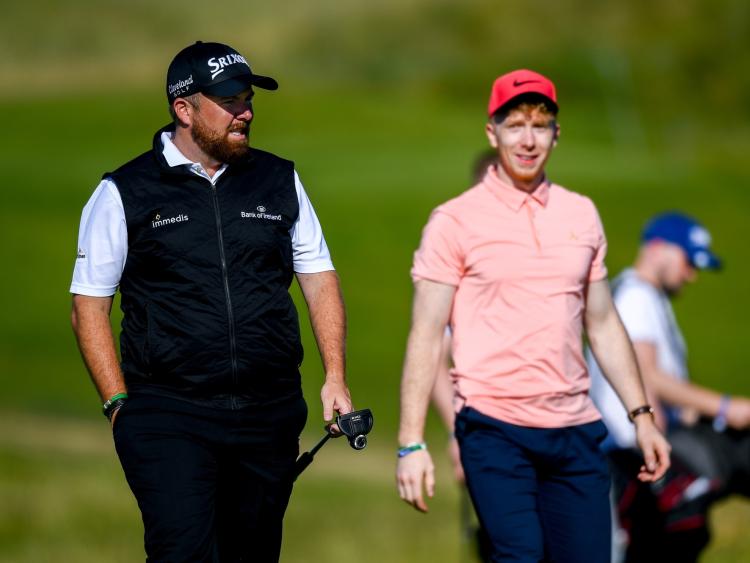 TWELVE months ago today, a number of Limerick sporting greats were keeping the galleries royally entertained during the Pro-Am tournament at the Dubai Duty Free Irish Open Golf Championships at Lahinch Golf Club.

Limerick's All-Ireland winning senior hurler Cian Lynch and former Munster captain Paul O'Connell were among those big name stars who showcased their skills on the eve of the Irish Open played over the West Clare links in the first weekend of July 2019.

2018 Hurler of the Year Lynch and his playing partners, including leading Irish professional Shane Lowry, attracted the biggest gallery of the morning starters in the 2019 Pro Am.

Patrickswell clubman was playing in the company of fellow hurling stars, Joe Canning, of Galway, and Clare's Shane O'Donnell along with 2009 Irish Open winner Lowry, who won the tournament at Co Louth Golf Club as an amateur.

The star hurlers took time out to to sign autographs and take selfies for delighted sports action.

After completing his round, Lynch told told the Limerick Leader: "It was some experience. I was actually nervous enough and it was daunting enough to come out here and play in such a place like Lahinch.

"I just couldn't say 'no' to something like this, to play with the likes of Shane Lowry, Joe Canning and Shane O'Donnell.

'Left lip & firm' - Limerick's Munster SHC final hero hurler Cian Lynch about to line up a putt on the 9th green during the Pro Am at the @DDFIrishOpen at Lahinch on Wednesday #LLSport #IrishOpen @Limerick_Leader pic.twitter.com/Gyxy1NeyHY

"These kind of opportunities don't come around very often and I was delighted and I was only delighted I didn't hurt someone with a stray golf ball too, delighted to get through it.

"Hitting a sliotar and hitting a golf ball is totally different. Come here, it's like everything, once you practice and practice, you try and get the hang of it."

The former Munster, Ireland and Lions captain also took part in the the Ryder Cup Celebrity Match at Hazeltine National in 2016 which saw 5,000 spectators gathered around the first tee.

O'Connell said: "It was a magic experience today. Andrew (Johnston) took it quite seriously. He doesn't play a lot of links golf, he was telling me, so he was parking on parts of his game.

"He was hitting two balls quite a lot which, for me, was a great experience. I suppose he didn't have as much banter as maybe we would have expected.

"For me, it was more enjoyable to watch him really, thinking about the game and trying to figure out the course. He was a lovely guy and it was a great experience.

"The course is incredible. We had great fun with the crowds. It was funny, I had more family following me here than I did have at Munster rugby matches! It was great fun."