Opinion: Only one Limerick man tops the hurling all time list 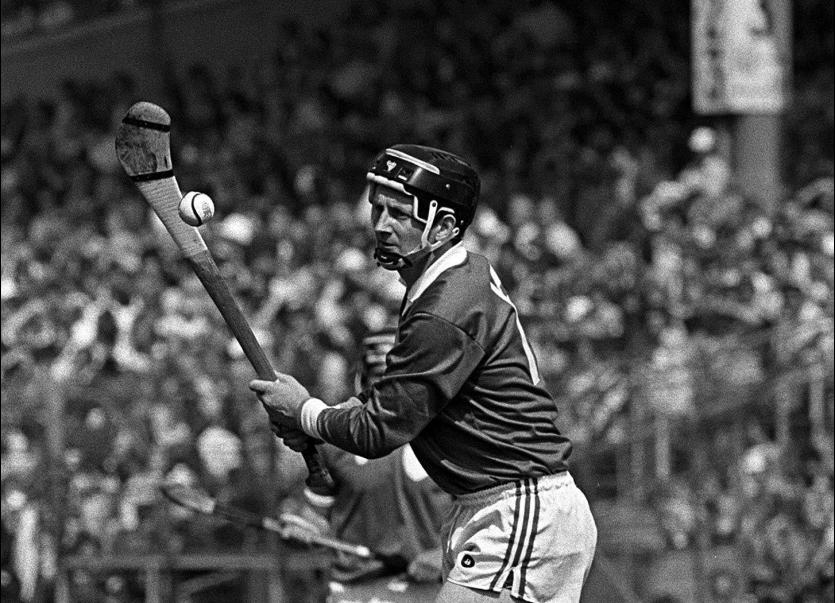 In a moderate position in the overall rankings came Limerick’s Eamonn Cregan (16th), the finest hurler it has been my privilege to see in action.

Polls are always subjective, nevertheless let us examine the case for the Claughaun stalwart to move up the rankings.

As the ‘Indo’ poll only covered the period between 1970 to 2020, we are asked to forget about the hurling events of 6/6/1966 – albeit it is a day that will live forever in sporting memory.

Competing against an unknown Limerick team, raging hot favourites Tipperary, chasing their 3rd All-Ireland in a row, were blown away by a rampant Limerick team on a 4-12 to 2-9 scoreline in a Quarter Final Munster Championship tie with Eamonn Cregan helping himself to 3-5 of Limerick’s tally.

At the time, Tipperary were regarded as being one of the greatest hurling teams ever. In 1964, they had 14pts to spare over Kilkenny in the All-Ireland Final.

Yet, all that talent came to nothing when they encountered ‘Blondie’ Cregan at the Cork Athletic Grounds.

Just weeks after his 21st birthday, the Limerick youngster ran riot with his class, pace and skill proving too much for Tipperary. Alas, for the purposes of the ‘Indo’ poll, this game has to be disregarded in its entirety with 1970 as a starting point.

The National Hurling League in 1971 saw Limerick make a breakthrough with a 3-12 to 3-11 Final victory over Tipperary. An injury time point from a free giving Richie Bennis the opportunity of winning the day for Limerick with Donal Carroll’s ‘Indo’ headline reading “Richie regains League for Limerick”.

Lest I forget, Eamonn Cregan scored two goals from play that afternoon. In an earlier round in the competition, Limerick roasted Galway at the Gaelic Grounds with the ‘bold’ Cregan netting three goals – all from play.

Then came 1973 and the realisation of a dream for Limerick, winning the Munster Championship and, later, the All-Ireland after a 33year wait.

Time and again, these games against Tipperary and Kilkenny have been dissected and discussed. A solitary point victory saw Tipp defeated on a 6-7 to 2-18 scoreline in the Munster Final.

It is now part of folklore that a point with the last puck of the game from Richie Bennis gave Limerick the Munster title. Predictably, the media headlines were dominated by Richie Bennis and the last gasp winning point.

As a footnote, let it be noted that one Eamonn Cregan, believe it or not, scored two goals from play.

Previously, in the Munster semi-final, Limerick had beaten Clare by 3-11 to 3-9, with Cregan scoring two goals from play for the Shannonsiders.

For the All-Ireland Final itself, history records that Eamonn Cregan, the most lethal scoring forward in the country, was moved to centre-back in a bid to counter Pat Delaney, Kilkenny’s talisman and chief scoring threat.

The move worked a dream as Cregan stifled the Delaney danger with ease – the sheer class of the Claughaun player overwhelming the direct approach of the Kilkenny captain.

A magnificent Munster campaign from Cregan saw him net four goals from play, divided equally between Clare and Tipperary with a total of just three points to spare as winning margins over the two games.

Throw in a faultless centre-back display in the All-Ireland Final against Kilkenny and you had a hurler at the very top of his game.

For all that, in their wisdom, the Carroll’s All-Stars selectors decreed that Cregan did not merit inclusion in the 1973 team. Perhaps the worst decision in the history of the controversial All-Stars system.

Throughout his career, Eamonn Cregan’s ability shone like a beacon and, on one special occasion, hit heights that ordinary mortals could only dream of.

On April 21st 1974, Limerick defeated Tipperary 1-16 to 3-8 in a National Hurling League semi-final tie at the Gaelic Grounds.

That day, playing at centre-back, Cregan gave an exhibition in hurling that took the breath away. With superb anticipation, time and again he stifled Tipperary attacks before sending his forwards away. Cregan’s every stroke was applauded by spectators fortunate enough to be witnessing a hurling masterclass.

Accuse me of bias if you will, but accept the Cregan performance as written by John D. Hickey, celebrated GAA journalist with the Irish Independent;

“It is assuredly a measure of the artistry, efficiency, judgement and the power of his striking on right and left that Limerick’s centre-back Eamonn Cregan should stand head and shoulders over every other man, foe as well as ally, in a match in which so many earned unstinted admiration. Not since Mick Roche in the 1968 All-Ireland Final against Wexford have we seen anything to compare to the magnificence of the Claughaun star yesterday

“Indeed, the fundamental difference between the sides was that Limerick had Cregan and that Tipperary had no one, in any part of the field, who remotely resembled him.”

From Mackey to Ring, John D. Hickey, doyen of the GAA press corps, had seen them all. That tribute to Eamonn Cregan spoke for itself.

At the height of his career, Cregan was the most complete hurler of his generation. Eddie Keher, Pat Henderson, Jimmy Barry-Murphy and Jimmy Doyle will legitimately have their supporters.

You can talk to me as long as you like about these great hurlers and I will remain convinced that Cregan was better than any of them.

Close the eyes and it is easy to see Eamonn Cregan excelling in all positions.

Right to the end of his career, Eamonn Cregan’s scoring prowess was remarkable.

On the losing team to Cork in the 1976 Munster Final, Cregan kept Limerick’s hopes alive with a four goal contribution. Despite losing to Galway, Cregan hit 2-7 in the 1980 All-Ireland Final – while a tally of 5-18 saw him finish as the Championship’s Top Scorer.

While acknowledging the excellence of Shefflin, D.J. Carey, Joe Canning, Nicky English etc., the sheer genius of Eamonn Cregan’s display against Tipperary in the 1974 National Hurling League semi-final and the exceptional standards he maintained over a long career, whether in defence or attack, make Eamonn Cregan my best hurler of the last 50 years.

Tipperary supporters, please note, in reaching that conclusion, I have not had to rely on the 3-5 he majestically scored in the Munster Championship against Tipperary in 1966 – that wondrous scoring achievement is parked for another poll sometime in the future.