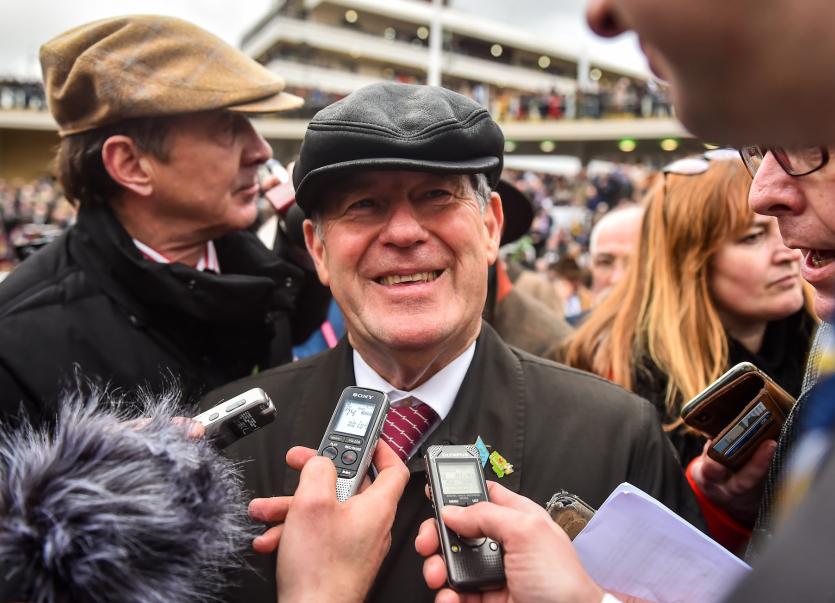 LEADING racehorse owner JP McManus gave a shout-out to his close friend and former Limerick hurling great Joe McKenna after recording a stunning four-timer on the second day of the Cheltenham festival.

McManus brought his record tally of Cheltenham Festival wins to 64 after seeing his famed green and gold hoop colours carried to success on four occasions in a 1019/1 four-timer on a dramatic day of National Hunt racing at Prestbury Park.

McManus dominated day two of the festival with Champ, 4/1, in the RSA Insurance Novices' Chase, Dame De Compagnie, 5/1, in the Coral Cup Handicap Hurdle and Easysland, 3/1, in the Glenfarclas Cross Country Chase on the mark before Aramax, 15/2, brought up the four-timer in the Boodles Juvenile Handicap Hurdle under Mark Walsh.

Following the win of Dame De Compagnie, in an interview with ITV Racing, McManus said he was thinking of his good friend Joe McKenna who wasn't at this year's Festival.

McManus said: "I would just like to mention a friend of mine, Joe McKenna. He is not here today - he has been with me here for the last 30-odd years, but he is at home looking in at the minute. Just to say we are thinking of you, Joe, and we will have you back here next year."

Four winners on day two of the #CheltenhamFestival presented by @MagnersUK

An afternoon for the ages pic.twitter.com/jKwtmZyUxe

Turning to Dame De Compagnie's win in the Coral Cup Handicap, under a fine ride from Barry geraghty, McManus added: "Barry was very patient on her. I think that he might have liked them to go a stride faster but she got the business done anyway in the end.

"It looked all over with Champ [his RSA Novices' Chase winner] but Barry gave him a great ride - he kept him a bit wide. I think after falling here the previous day, he maybe thought to get a bit of light and let him do his own thing a bit. It came good in the end and it was very exciting."

McManus tally of four wins on Wednesday brought his tally to five after the opening two days following Epatante's success in the Unibet Champion Hurdle on Tuesday.