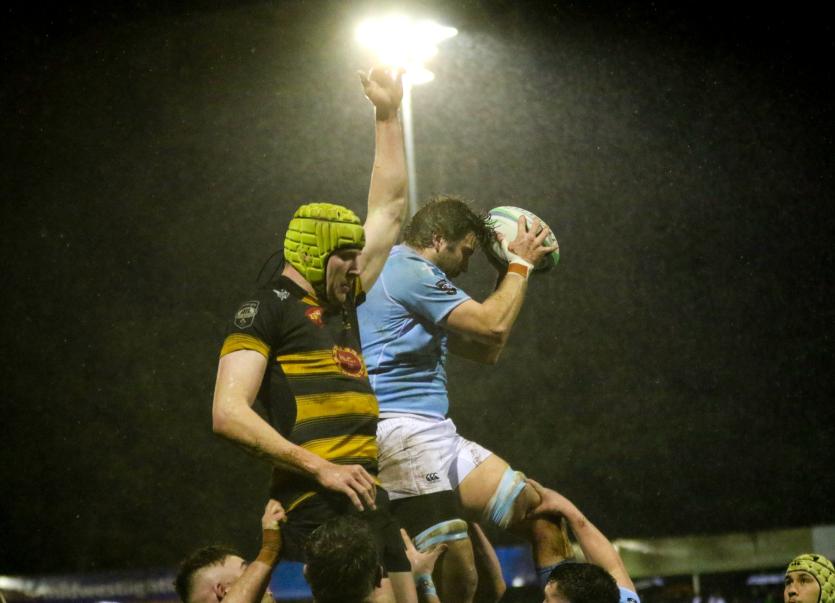 GRITTY Young Munster boosted their play-off hopes in Division 1A of the Energia All-Ireland League with a deserved 11-7 derby win over local rivals Garryowen at a wet and windy Dooradoyle on Friday night.

The win propelled Munsters' up to fourth place in the table, three points ahead of fifth place Lansdowne who will play their game in hand at home to Ballynahinch on Saturday.

There was an edge to the derby from the kick-off, understandable given how much was at stake for both sides.

Both sides lost a player each to the sin bin after a dust-up, involving several players from both sides, in the middle of the pitch mid-way through the opening half.

Garryowen, who had won their four most recent league fixtures - and nine of their last 10 AIL ties  - came into the game in second place in the top flight table and were hoping to take another step towards securing a home semi-final as well as a top four play-off place.

The Light Blues, who were unbeaten at home in the league this season prior to kick-off, were also looking to complete a home and away double over their Greenfields' side in 2019/2020.

Munsters', who went into the game in fifth place in the 1A table, deservedly led 8-0 at half-time. Jack Harrington scored a well-worked try after Garryowen were reduced to 14 players following a sin-binning for a high tackle.

Out-half Evan Cusack's had earlier kicked the visitors in front with an eighth minute penalty goal.

On a filthy wet night, visitors Munsters' were good value for their eight point interval lead. They played the unfavourable conditions better than their hosts. And Munsters' were on the right side of the penalty count through the opening period.

Munsters' made fewer handling errors and there was much to admire in the intensity they brought to the game. It was a night when not having possession of the football was an advantage.

The game was held up for a lengthy period early on in the second half due to an unfortunate leg injury sustained by a Garryowen player.

To their credit. resilient Garryowen fought back to earn a losing bonus point when awarded a penalty try in the final quarter.

They came close to notching one some time earlier when awarded three scrum penalties deep inside the Munsters' 22. However, after opting for another scrum off the third penalty award, Munsters', who had lost a player to the sin-bin, drove the home side back off the ball on their own put in.

WATCH: After series of 3 scrum penalties in a row awarded to @GarryowenFC & a sin-binning for @YoungMunsterRFC this happened on the fourth scrum. Munsters lead @GarryowenFC 11-0 in @EnergiaEnergy All-Ireland League Division 1A at Dooradoyle #LLSport #EnergiaAIL pic.twitter.com/2wMRCliaKI

This was was Young Munsters' fourth on the bounce in the All-Ireland League and their seventh league win in their last eight outings.

Both Limerick sides have now just four games to go in their All-Ireland League regular season.

WATCH: Game of fractions. @YoungMunsterRFC this close to being awarded second try on stroke of half-time v Garryowen in Division 1A of the All-Ireland League at Dooradoyle #LLSport #EnergiaAIL pic.twitter.com/ykuciwiiYX

Next up for Garryowen is a long trip to Ballymacarn Park to face Ballynahinch on Saturday, March 14. On the same day, Young Munster will host play-off chasing UCD at Tom Clifford Park.