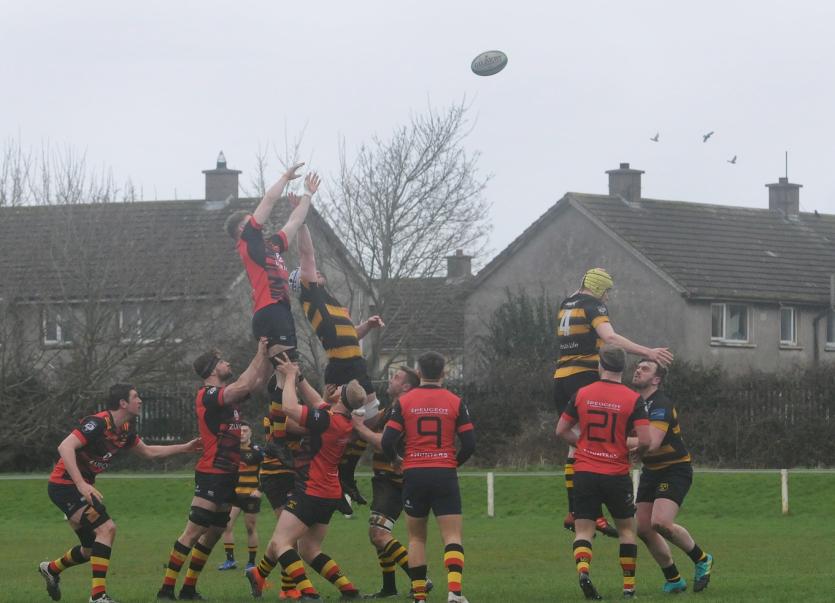 In Division 1A, second-placed Garryowen made it four wins on the bounce and an impressive nine victories in their last 10 games when easing past Clontarf 32-13 in an impressive bonus point success at Castle Avenue.

High-flying Garryowen sit in second place in the table, now 13 points clear of fourth placed Lansdowne in the battle to secure a top four finish. The 'Light Blues' also enjoy an eight point advantage over third-placed UCD in the race to claim a home semi-final.

Also in the top flight, Young Munster bagged their third successive league win when edging past Lansdowne 21-20 in a nail-biting fixture at Tom Clifford Park.

Munsters' victory, which ended Lansdowne's six game winning run in the league, has seen the fifth-placed Greenfields side move to within a point of the Dubliners who occupy the final top four play-off position in Division 1A.

The two in-form Limerick sides, Garryowen and Young Munster, will meet in a crucial local derby fixture, which is sure to attract a bumper attendance, to Dooradoyle on Friday night next, 8pm.

In Division 1B, in-form Shannon run in seven tries in a resounding 50-10 bonus point win over Nass on the back pitch at Thomond Park. The comprehensive victory has seen Tadhg Bennett's charges move up to second place in the table as their promotion push continues to gather momentum.

Meanwhile, in Division 2A, another promotion-chasing side, Old Crescent, recorded a precious 29-17 victory over Rainey Old Boys at Rosbrien to move up to fourth place in the table.

Also in 2A, UL-Bohemian dropped to seventh place in the table after suffering a 17-31 home defeat to Buccaneers at UL.

In Division 2C, resilient Bruff scored a crucial 37-19 bonus point victory over Omagh Academicals at Kilballyowen Park. The victory has moved Bruff up to seventh place in the table, now two points clear of the relegation play-off position.

There are now just five series of regular season games to go in the All-Ireland League.

In Division 1A, Garryowen held a slender 12-8 lead over Clontarf at half-time in their clash at Castle Avenue.

WATCH: @Shannon_RFC over for their seventh try at Thomond Park through out-half Ben Daly. Parish side lead Naas 50-10 after 72 mins in @EnergiaEnergy All-Ireland League Division 1B #LLSport #EnergiaAIL pic.twitter.com/1I6xO6T4rq

Conan Doyle's charges quickly added a third try through flanker Cian Hurley, while Keating later bagged his second of the day and the bonus point try for the 'Light Blues'.

Exciting young out-half Healy, who has featured for Munster in both the Heineken Champions Cup and Guinness Pro14 this season amassed 12 points in all with the boot.

Young Munster showed admirable resilience to fight back from six points down at half-time, 11-17 against in-form Lansdowne to claim the precious four league points on offer at Greenfields.

Munsters' first half points came courtesy of a Jack Harrington try and two penalty goals from the boot of out-half Evan Cusack.

The Limerick side still trailed by six points, 14-20, towards the end of the third quarter.

However, Munsters' overhauled their visitors when captain Alan Kennedy crashed over for a crucial individual try with Cusack adding the extras for a one-point lead, 21-20.

Lansdowne did have a chance to win the game late on but Craig Ronaldson's penalty attempt into the teeth of the wind dropped just short.

In Division 1B, Shannon laid the foundation for the fifth win in their last six AIL fixtures in the opening half on Thomond Park's back pitch after which they held a significant 22-3 interval lead.

The Parish side bagged three first half tries through Eathon Moloney, who bagged two and Nathan Randles. Out-half Ben Daly added a penalty and two conversions.

Relentless Shannon had the bonus point in the bag within five minutes of the restart through Kelvin Brown with Daly again converting.

All over. Young Munsters win. 21-20. Next up for them. A Limerick Derby with Garryowen on Friday night. #llsport pic.twitter.com/swZGKiWXMv

Naas lost two players to the sin-bin during that second half and Shannon took full advantage to score three more tries, two for centre Pa Ryan and one for out-half Daly to bring up the half century of points.

This was in-form Shannon's four successive league win in Division 1B.

Meanwhile, Old Crescent's 12-point victory over Rainey Old Boys gets their promotion play-off hopes back on track in 2A.

The Limerick side, after an excellent opening 40 minutes, led 20-3 at the interval.

Crescent had a first half hat-trick of tries from Val McDermott, while Ronan McKenna added a penalty and a conversion.

Three second half penalties from McKenna steered Crescent clear at 29-10, although Rainey did manage a late consolation try.

Also in Division 2A, UL-Bohemian remain nine points clear of the relegation play-off position despite suffering their 14-point defeat to Buccaneers at ULs North Campus.

UL-Bohs had trailed 10-21 at half-time. Despite playing into a strong wind, the home side managed two first half tries through Joey Conway and Dave O'Connor.

After Buccs' had stretched their lead in the third quarter with a bonus point try, UL-Bohs hauled themselves back in the contest when awarded a penalty try on the hour mark to trail by 11 points.

However, any hopes the Annacotty side had of securing a losing bonus point from the game were dashed when Buccs' grabbed a 63rd minute penalty to stretch 14 points clear.

Meanwhile, in Division 2C, Bruff laid the foundation for their precious 18-point home win over Omagh Accies in the opening half after which the Limerick side held a significant 17-0 lead.

Bruff scored five tries in all, against their Ulster visitors in their vital success. Johnny Clery, Sean D'Arcy, Cillian Rea, Graham Whelan and Kevin McManus all crossed the whitewash for the South Limerick side.

Next up for Bruff is a trip to table toppers Skerries on Saturday next, February 29.