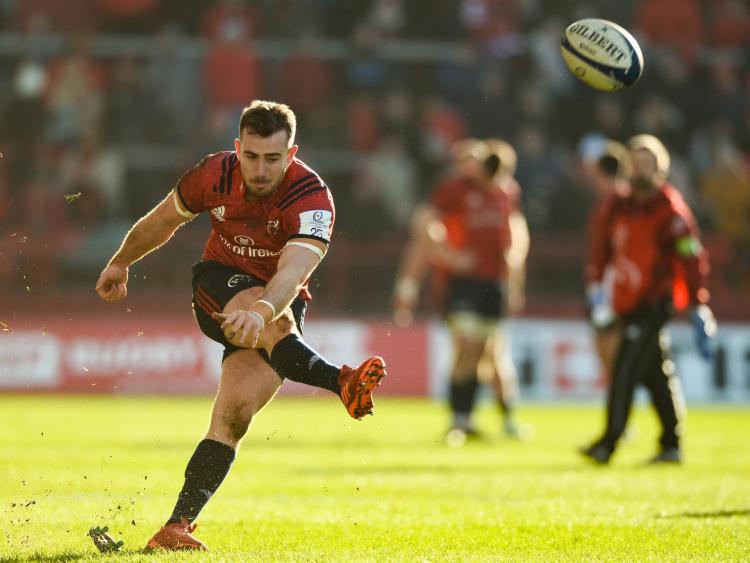 MUNSTER out-half JJ Hanrahan admitted the side will face a tough remainder of the season if they perform like they did in the opening half of Friday night's Guinness PRO14 bonus point win over Zebre in Italy.

Hanrahan turned in a Man of the Match display as Munster scored a hard fought 28-0 success over the Italians who were forced to play 70 minutes of the game with 14 players after winger Pierre Bruno was red-carded early on at the Stadio Giovanni Mari near Milan.

Bruno was dismissed for leading with an elbow into the chin and neck area of Munster flanker Chris Cloete.

Despite their numerical advantage, Munster struggled to lead 7-0 at half-time, with Limerick winger Calvin Nash dotting down from Craig Casey's box-kick.

Munster upped the intensity levels, reduced their error count and improved their discipline after the restart and tries from Hanrahan, on 52 minutes, Rory Scannell four minutes later and finally Darren Sweetnam seven minutes from full-time secured a precious five-point haul.

Munster's cause was not helped by a couple of unfortunate injuries, as winger Shane Daly pulled out in the pre-match warm-up after sustaining a glute injury, while stand-in captain Niall Scannell was forced off in the 20th minute with an ankle injury and scrum-half Craig Casey had to be replaced just after half-time with a wrist injury.

Afterwards Man of the Match Hanrahan, who converted all four of the tries for a 13-point haul, was frank in his assessment of the side’s first half showing.

Hanrahan said: “That was very, very tough. To be honest the first half wasn’t good enough by us.
”They went down to 14 men and mentally, I dunno, we weren’t there fully in the first half.

”Look, they threw everything at us, we stayed in the fight thankfully, we protected our line.
”Going in at half-time, Johann (Van Graan) had a few words for us. We changed our mindset and we came out and performed the way we should perform.

”If we turn up for games like that for the rest of the season it is going to be a tough year. Luckily we rectified it in the second half.

”There were some good positives to take out of it. We got the bonus point. Fellas like Jake Flannery coming on, making his debut, another good Rockwell College man, so it is good to see him coming through.

”Overall, we are happy with the five points.”