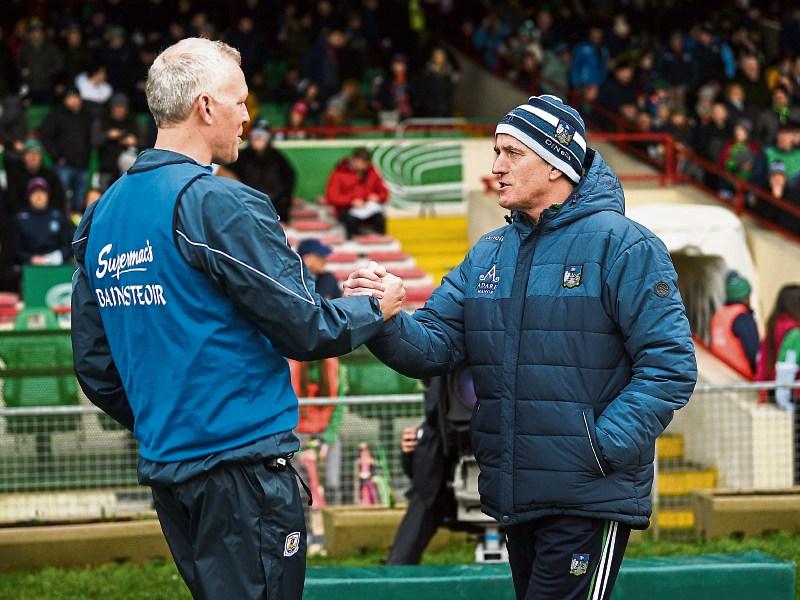 The game at the Gaelic Grounds last Sunday might well have lacked the fluidity of previous encounters but it was a physical battle from start to finish.

Limerick coped well and in reality they had the game won long before the finish.

As in previous games Limerick hit a lot of wides and our inside forward line didn’t make use of the amount of ball that came their way.

I expected more from Galway but they found it hard to contain Limerick who were full of running particularly in the opening half. Indeed Limerick could and should have won this game by a great deal more. Limerick were scrappy at times and gave away possession through some poor distribution. With two games played Limerick are on full points and as a unit I think they are going really well.

It was two years since Limerick last played Galway in the league and over the past couple of seasons the players have got to know each other well.

From Shane O’Neill’s point of view he needs to strengthen his panel. He needs to find players that will be around come championship time. I didn’t see a drive in Galway. They might well be training hard but to me they showed no pattern of play.

Now, in Shane O’Neill’s defence he took the opportunity to move some players around, others were given a chance to impress but right now it looks like he will be picking from many of the players that have been to the fore over the past few seasons.

It’s hard to credit that Galway are one of the most successful counties at minor level and it appears so many of them just don’t cut the mustard at adult level. Once again they looked to Joe Canning to deliver, he worked hard and scored well for them but when he went off they looked really poor in attack. Like on previous occasions when Canning is off the field they lack leadership.

When Limerick were in flow particularly in the first half they made it look easy. When those short sharp passes work they look really good but when they don’t you can hear the groans in the stands. Limerick’s game is about movement, it about finding the player in space and when they do that they are able to open up teams.

I mentioned earlier about the bad wides and like other games so far this year and last year they are getting away with them. Possession is key to their game plan but I would like to see them being a bit more ruthless in front of goal.

The full forward line are handling a lot of ball, they have the capacity to score goals but for some reason they find it hard to do.

To Galway’s credit they managed to stay with Limerick in the opening half, the teams were level three times but Limerick held them scoreless for the final quarter.

Limerick hit some very poor wides and also had goal chances but it was a marked improvement on the first half against Tipperary the previous week.

Any hope of a Galway fight back ended only a minute into the second half when the hard working David Dempsey grabbed a superb cross field ball from Seamus Flanagan to score the games only goal.

You can see by Dempsey that he wants to be a first team starter and on the evidence of what we have seen since the start of the year he is very much going in the right direction.

His willingness to work harder is a dimension that has improved this year and he will have seen the benefits of this himself. I have said on a few occasions since the team started back playing games before Christmas that it’s going to be very competitive to get a starting slot in the team.

The heavy rain that fell on Saturday night and Sunday morning didn’t help matters for this game, the pitch was sticky and getting the ball up on the first touch was difficult.

We had a lot of bunching where players swarmed around the breaking ball and this didn’t help when it came to a flowing game. The bigger framed players coped better but we did have some good honest battles. Galway only scored two points between the 17th and 39th minutes of the second half.

That really tells the tale of Limerick's dominance of the game. They struggled to make any impression. Sean Finn had a fine second half, Conor Whelan did enjoy some success but Finn had his measure. On a day when few enough players stood out I think the Bruff man was one of the best on display.

It was Declan Hannon’s first day back and it was very disappointing to see him substituted again.

He is obviously finding it difficult to gain full fitness but the player comes first. It must be very frustrating for him as he battles to return to full health. All looked great as the Adare man scored the opening point after two minutes and he gave the impression that all was well.

What ever about the league the main target is to have all players ready for action come championship time.

David Reidy had a fine game and scored from frees and play and on the opposite wing Gearoid Hegarty also showed a return to form. The league is providing all teams with the opportunity to blood players and game time is the only way of developing a player.

I spoke with John Kiely after the game and I got the sense that he is happy all is going well. He was very satisfied with the work rate of the team.

“We had to improve on the opening half against Tipperary and we did that today. That was a hard game, a physical game and I was pleased with how we responded.

“Conditions weren’t easy but two games in I am pleased we are doing a lot of things right. Of course, we want to improve more but so does every other team. Getting young players on the field and getting game time into them will help them greatly but it will also help the team. Places will be hard won and I am really happy with the attitude of the players both in game and training.” he added.

I would think all players will be happy to have a break next weekend. They have been going hard for the past few weeks and for some they will still be in action in the Fitzgibbon Cup.

It was a challenge for a lot of players last week as they played three matches in seven days. John Kiely told me the players are not making a big deal about it but as a management team they are fully aware of the demands of the players.

It’s still only early February and the year will bring lots of drama before it comes to an end. Teams are building now and while these games are important it’s championship that provides the measure.

For more of Martin Kiely's columns see www.limerickleader.ie or use #LLSport on social media.