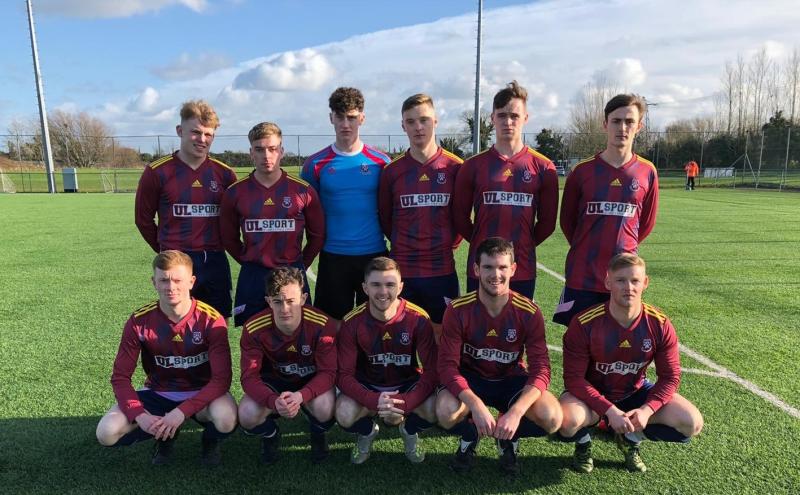 The UL side which defeated Maynooth University in the quarter-final of the Collingwood Cup on Monday Picture: Third Level Football Twitter

The victory has helped the Ian Sullivan-managed UL side set up a semi-final showdown with either DCU or UCD on tomorrow, Tuesday, at the AUL Complex at 2pm.

UL had also secured a 3-1 win over Maynooth University at the quarter-final stage of the Collingwood Cup 12 months ago when it was staged in Limerick.

Hat-trick hero Foley, who signed for First Division Cobh Ramblers from Limerick FC in recent days, opened the scoring for UL after just six minutes with a superb free kick.

The talented goalscorer added his second of the game just before the half-time break to ease the Shannonsiders into a 2-0 interval lead. Foley went on to complete his hat-trick at the start of the second half.

Foley, who began his career at Aisling Annacotty, joined Limerick FC in 2017. He spent two seasons at their U19 side, finishing as the league’s top scorer in 2017. He made his senior debut in the 2018 season against Shamrock Rovers. In 2019, he became a key member of their senior side, making 20 first team appearances and scoring two goals.

A Harding Cup medal with his college last year, Foley also scored in their Collingwood Cup final defeat to UCC at the Markets Field.

Having spent a period on trial with Cobh Ramblers during pre-season, he has now signed for the First Division outfit for the new League of Ireland campaign.

Maynooth did manage to pull a goal back in the 71st minute following a goalmouth scramble. UL survived a scare four minutes later when Maynooth failed to convert from the penalty spot.

UL maintained control of the tie over the remainder of the game to seal a deserved success.