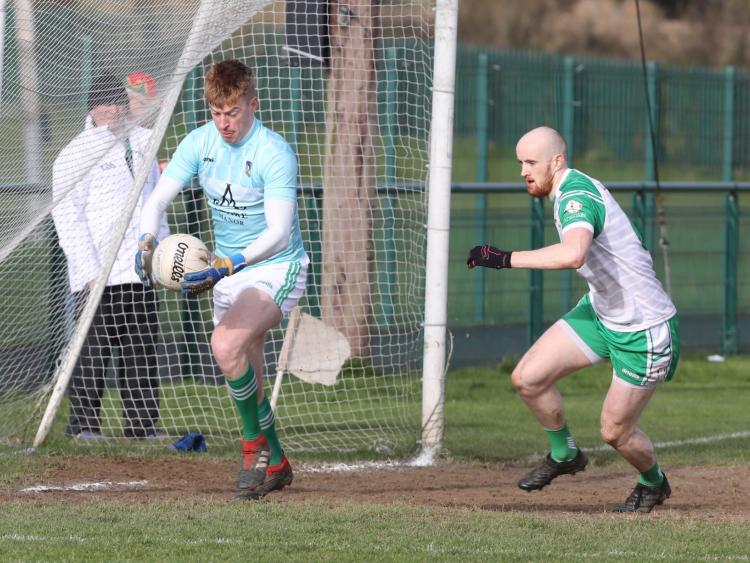 Limerick goalkeeper Donal O'Sullivan was among the scorers

Limerick footballers made it five wins out of five for the season as they held out for a tense victory over London in the Division Four National League second round in Rathkeale this afternoon.(Final score - LIMERICK 0-8 LONDON 0-7)

Struggling to make use of the swirling wind, they fell behind early on before moving into a three point lead on the three quarter mark that was just enough to see them over the line.

London's defence gave the Shannonside full-forward line little opportunity to repeat early season form that landed them the McGrath Cup in fifteen years but, when their backs were to the wall, the home side showed a maturity to play themselves out of trouble.

James Hynes, Tommy Clarke's free and Seán Hickey had Exiles leading by three after ten minutes before Pádraig de Brún found the range from distance. Goalkeeper Donal O'Sullivan came up to equalise off a free and a '45' and Jamie Lee's free coming up to the break put Limerick 0-4 to 0-3 ahead.

They were all square when London goalie Noel Maher sent over his '45' on the restart before Lee's free, Séamus O'Carroll and Danny Neville put distance between the sides. However, Liam Gavaghan replied with a free for the visitors and the resulting kickout got caught in a gust but Hickey's shot screamed wide of the post.

In the closing minutes, Seán Nolan brought the gap back to one, Lee replied with a free and, after Kevin Rafferty pointed from distance, London failed to crack open the space for the equaliser.