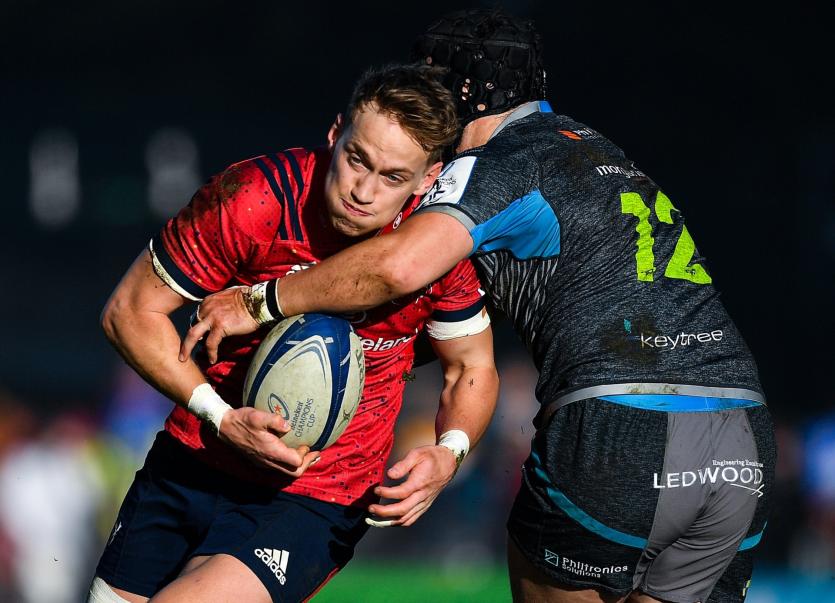 Munster's Mike Halry is tackled by Dan Evans, of Ospreys, during the Heineken Champions Cup, clash at Thomond Park on Sunday

MUNSTER signed off on their Heineken Champions Cup campaign for another season with a convincing 33-6 bonus point win over a struggling Ospreys side before an official attendance of 19,891 at a sunny Thomond Park on Sunday afternoon.

After a sluggish opening half an hour in which Ospreys, who didn't win a single pool game in Europe this season, built a useful 6-0 lead, Munster thundered back into the game to lead 14-6 at half-time in this 'dead rubber' fixture.

Munster's hopes of progressing to the quarter-finals of the Champions Cup had ended on Saturday evening when results elsewhere went against them.

However, three more second half tries from Man of the Match Conor Murray and the bonus point effort from rising star Craig Casey, as well as a second of the game from number eight CJ Stander, sealed a bonus point win for the home side against struggling opponents who have won just one of 16 fixtures in the Champions Cup and Guinness Pro 14 this season.

The game was already rendered a 'dead rubber' prior to kick-off as Munster's hopes of making the quarter-finals were ended on Saturday.

A combination of Northampton's impressive defeat away to Lyon and Glasgow Warriors ruthless bonus point success over Sale sharks ended Munster's hopes of reaching the quarter-finals.

If the group stages of the Heineken Cup has taught us anything over its 25-year history, it is the paramount importance of winning home fixtures. The reality in this teak tough Pool 4 is that once Munster failed to beat Racing 92 in their opening home fixture of the campaign, they were up against it in terms of qualifying for the knock-out stages.

That draw left Munster needing to win at least one of their two away games against Saracens and Racing 92. Munster's inability to secure a losing bonus point in an otherwise gritty display against Sarries' at Allianz Park put another dent in the hopes of progressing to the last eight of the competition.

Ultimately, those results cost Munster in terms of their qualifying ambitions.

Munster were dealt a blow before kick-off at Thomond Park as Ireland centre Chris Farrell was ruled out to due to a contusion on his knee. Farrell was replaced by Sammy Arnold.

In ideal dry and sunny conditions, it was the Ospreys who made the better start with out-half Luke Price landing two penalty goals in the seventh and 14th minutes to help the Welsh region into a useful 6-0 lead.

In between those two penalty goals, Munster lost their Ireland international winger Andrew Conway to a head impact assessment. Conway, who didn't subsequently return to the action was replaced by Dan Goggin.

Munster's discipline was letting them down during that opening quarter as the home side was penalised five times during that period.

From the second scrum penalty awarded to Ospreys in the opening 20 minutes, Price was time off target with his attempt at goal.

Munster finally got up and running in the 30th minute. Centre Arnold made the initial incision through the Ospreys defence with a terrific carry, while a clever snipe from scrum-half Murray brought the home side to within a few yards of the tryline, before number eight CJ Stander dotted down.

Hanrahan's conversion made it 7-6 to Munster.

That score really galvanised Munster, who upped the pace and intensity of their game through the remainder of the half.

That industry and endeavour of the home side was rewarded when prop Stephen Archer notched a second try on the stroke of half-time, touching the ball down against the goalpost padding.

Hanrahan's second conversion made it 14-6 at the break. The worrying stat from Munster during the opening half was the penalty count which had grown to eight by the change of ends.

Munster made the ideal start to the second half when Murray dotted down for a third try, after a powerful carry from Hanrahan created the opening. The out-half missed the difficult conversion, but Munster's advantage was out to 13 points, 19-6, after 50 minutes.

The bonus point try for Munster looked to have arrived five minutes later only for Rory Scannell's effort to be chalked off as the match officials found the centre had lost control of the ball in trying to touch it down.

That stay of execution for the Welsh region was short-lived, however, as Munster maintained the pressure on their opponents.

After full-back Mike Haley was held up initially over the Ospreys tryline, Munster were awarded a five metre scrum. The home side managed to get the push on their visitors and replacement scrum-half Craig Casey, only on the pitch a matter of seconds, sniped his way through a gap in the Ospreys defence to score.

It was a moment to savour for the highly rated Shannon clubman, who was captaining Ardscoil Ris in the Clayton Hotels Munster Schools Senior Cup just three years ago.

Munster gave youth its fling in the final quarter as Ben Healy, the Glenstal Abbey Munster Schools winning captain of 2018 was introduced off the replacements' bench.

It was the Garryowen clubman's Heineken Champions Cup debut, while exciting back-rower Jack O'Sullivan also made his European bow in the second half.

Munster managed a fifth try before full-time from Stander, his second of the game, as the two-time European Cup winners hit Ospreys for 33 points without reply in all.

After a 13-week run of games, Munster season now takes a break for a couple of weeks, with the province's next fixture coming against the Southern Kings in the Guinness Pro 14 at Musgrave Park on Friday, February 14, 7.35pm.