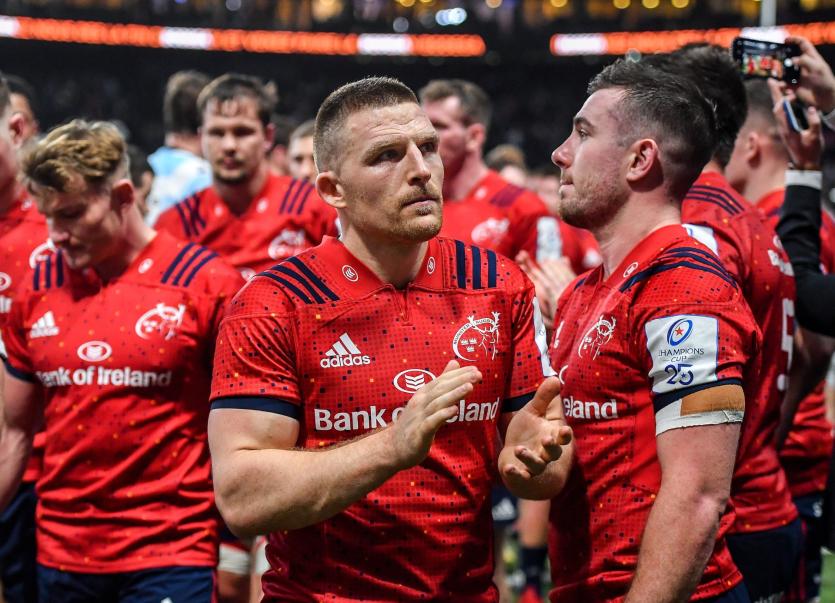 MUNSTER'S hopes of progressing to the quarter-finals of the Heineken Champions Cup for a 19th time are hanging by a thread following the province's defeat to Racing 92 in Paris on Sunday.

Munster, who have amassed 11 points from their five group games, dropped to third place in Pool 4 with the defeat in the French capital. Munster are now 11 points behind Racing 92 who have already qualified for the quarter-finals as Pool winners.

Saracens are second in the pool on 14 points, three clear of Munster.

Munster face the struggling Ospreys in their final Pool 4 fixture at Thomond Park on Sunday next, 1pm. Munster need to secure a bonus point win there and hope a number of other results go their way in the final series of fixtures.

Not even a bonus point win over the Ospreys would be enough for Munster to qualify if Saracens defeat Racing 92 at Allianz Park on Sunday, also at 1pm.

A Sarries' win would see them secure a second placed finish in the pool and qualification for the quarter-finals.

If Munster defeat Ospreys with a bonus point to bring them onto 16 points and Racing overcome Sarries' then Munster still have a chance to qualify.

Gloucester, with 14 points, who take on already-qualified Toulouse in France next weekend, are another team above Munster in the rankings at present.

Northampton, also on 14 points, and Glasgow Warriors, with 12 points, who take on Lyon and Sale Sharks away respectively are also ahead of them heading into next weekend.

If all of those sides win their final round of games, Munster would of course be definitively eliminated.

But if all four - or at least three from four - of Saracens, Gloucester, Northampton and Glasgow lose (even with losing bonus points) and Munster earn a bonus-point win, then the province would take one of the two final best runners-up places behind Ulster/Clermont.