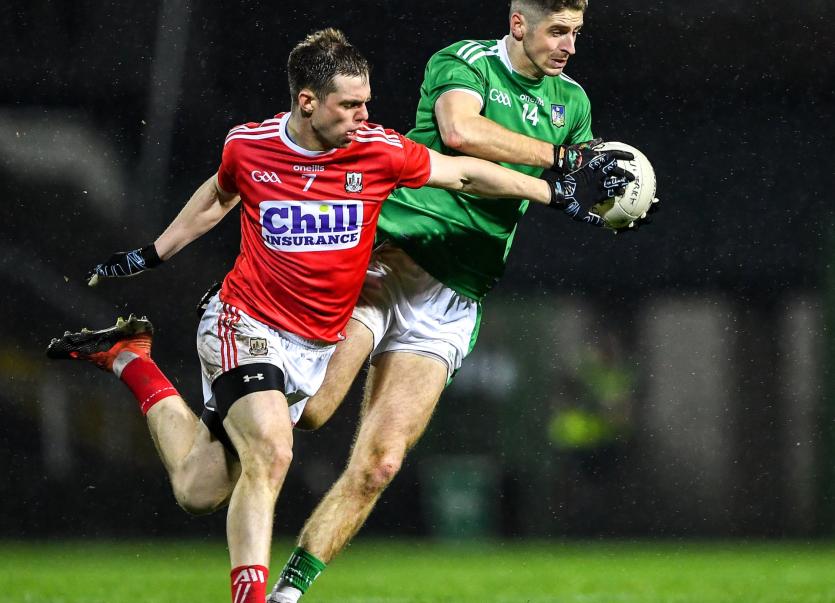 Limerick's top scorer Danny Neville gets away from Cian Kiely, of Cork, during the McGrath Cup final at the LIT Gaelic Grounds on Saturday night

While clearly delighted with the McGrath Cup success, Newcastle West clubman Lee wasn’t getting carried away with the early season silverware and has eyes for the upcoming Allianz league, the start date for which is looming large.

“We can’t get ahead of ourselves, we’ve to got Waterford on January 26 and the McGrath Cup hasn’t been the whole agenda for us," Lee said following Saturday night's success.

"It is important to give ourselves belief and to understand what it is to win games against teams that have been historically and currently better than us.

“You make your own luck, they won a lot of hard ball and it is fantastic for them (the players), because it confirms the work that they are doing off the pitch.”

While Limerick were joyful after beating Tipperary in the opening round of the Munster Championship last May, the result was followed by a hammering at the hands of Cork.

“We learned a hard lesson between Tipperary and Cork last year – and that won’t be happening this year,” Lee stressed.

Saturday’s victory saw Limerick lead from the eight minute to the final whistle, with the hosts finishing stronger, landing the last two points to seal a first McGrath Cup in 15 years.

“It is a compliment to Adrian O’Brien, our S&C Coach, he has an unbelievable interest in the boys and you can put a lot of that (strong finish) down to him. When you go down to 14 men for around 15 minutes, you’d wonder how you’d handle it. They handled it really well.”