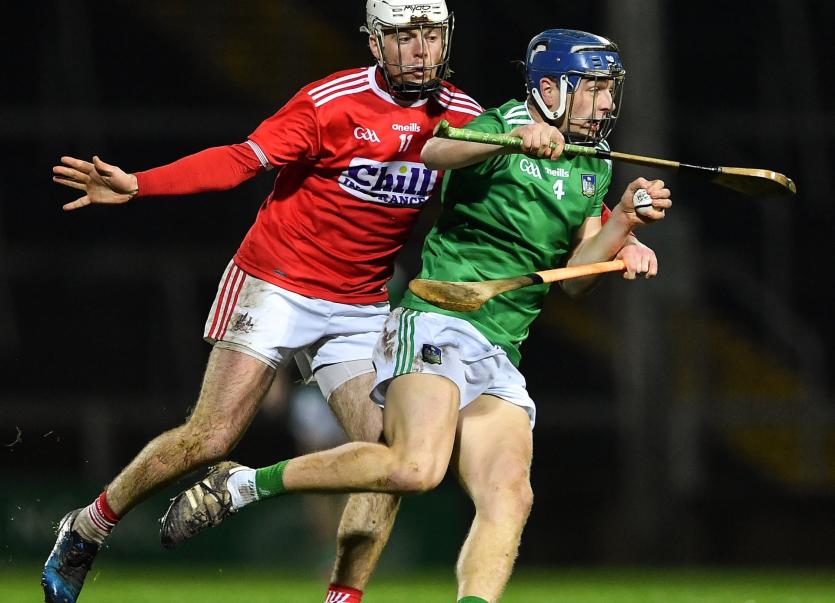 Limerick's David Reidy gets away from Luke Meade, of Cork, during the Co-Op Superstores Munster Hurling League final played at the LIT Gaelic Grounds on Saturday night

Limerick started slowly and trailed 0-5 to 0-1 after five minutes, with David Dempsey and Cian Lynch reduced the deficit before Aaron Gillane, making his first appearance of the new season, buried to the Cork net in the tenth minute. The Patrickswell forward was a late inclusion ahead of Adrian Breen.

The attendance for the double header was 5,295, as Limerick added to the McGrath Cup secured earlier in the evening by Billy Lee’s football side. Limerick last secured the Munster Senior Hurling League in 2018 and were full value for their 15-point victory over a disappointing Cork outfit.

The first half continued to be end-to-end and 11 first half wides for the hosts didn’t prevent them from taking a 1-14 to 0-14 lead at the break. Cork, for their part, hit just four wides.

David Reidy continued on free taking duty, despite Gillanes return, and he raised 11 white flags, with his first from play on 40 minutes a sublime effort. He quickly added two more points to stretch the margin to five. It was one-way traffic in a second half as Reidy, Dempsey and Mulcahy all added to their tally.

Limerick were able to introduce Sean Finn and Gearoid Hegarty, while All-Star Patrick Horgan was a half-time introduction for The Rebels.

Darragh O’Donovan ensured all six starting forwards were on target, stretching the advantage to 1-22 to 0-16 in the 52nd minute. John Kiely’s side were ruthless and hit just two second half wides.

They finished strongly to run out 1-32 to 0-20 winners, ahead of a league meeting with Tipperary on January 25 in Semple Stadium.